Written by Ali. Published on Sunday, 9th November 2014
A 4-wheel-drive guided tour of Fraser Island checking out the best spots with our experienced tour guide.

Fraser Island is a vast island, home to 'Seventy-Five Mile Beach' and criss-crossed by churned up sandy roads through jungle which can only be navigated by 4-wheel-drive (4wd). 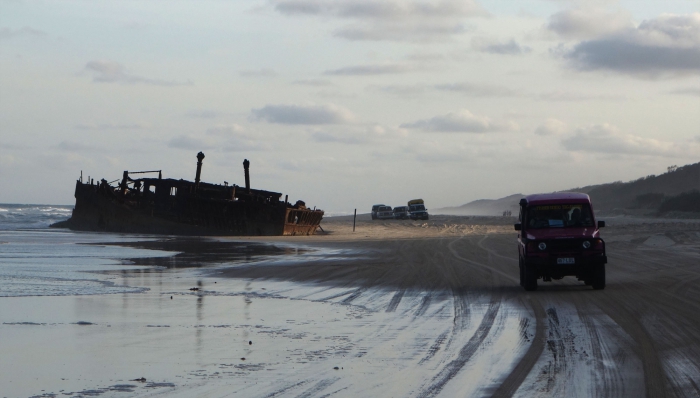 We decided to take the 'tag-along' route - where you are part of a convoy of 4wds with volunteers from the group driving, following a lead vehicle driven by a guide. We found a good deal on an operator, Fraser Dingo Tagalong Adventure with Bookme. There is no pressure to be a driver but those who chose to do so were asked to put down a $500 deposit and attend a quick talk earlier in the morning telling them what to do.

Our group was small (12 people all-in) so we only had two vehicles; one driven by the tour guide and the other driven by one of the two in our group who had asked to drive.

We met bright and early (7:50am) at the 4wd depot where we met our group - a mainly French and German group of friendly people in their 20s (thankfully most were great at English so our poor language skills weren't put to the test). We all headed off to the shops to help get the food we needed for the tour, picking up a few people along the way before we headed off. It was recommended we bought a bottle of water which we could refill as we travelled which Lisa and I did (although if we'd thought about it we would have brought our own bottles with us!)

Driving across to the ferry terminal then taking the 40 minute boat journey across, we were soon on Fraser Island and off on the bumpy road. 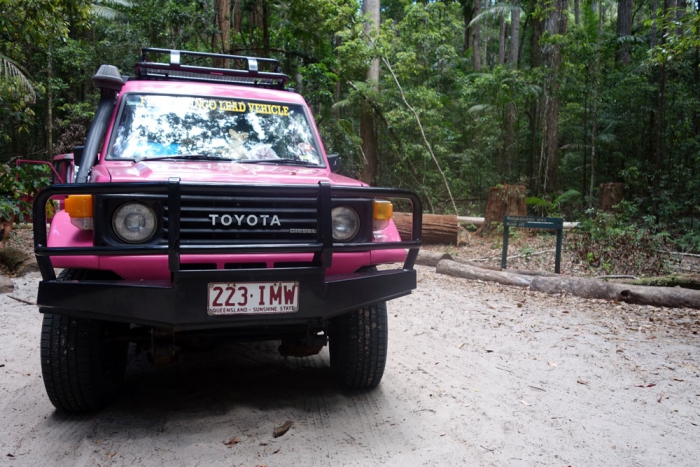 Our first stop on the trip was at Central Station where we got a brief history of the island and set off on a walk to Pile Valley, along its crystal clear river. 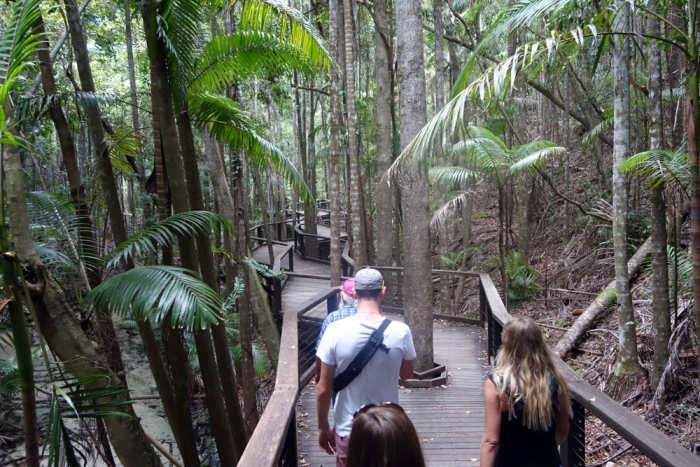 After the walk and grabbing a quick but much appreciated lunch we drove on to Lake Wabby, a green, warm lake at the bottom of a vast and steep sand dune. It was warm enough and safe enough to jump in for a quick swim which I greatly appreciated. Lisa was happy to paddle with the little fish on the edge. Afterwards we all lay in the sun chatting or snoozing while we dried off.

We spent the night at Cathedral Beach campsite just off Seventy-Five Mile Beach where we sat and watched the moon rise before heading back for a great meal of barbecued steak and salad (our group didn't have any eating requirements but I'm sure you would be catered to if you have). Then, after a quick shower we headed off to bed in our tents for the night (which were already set up and had beds in them). 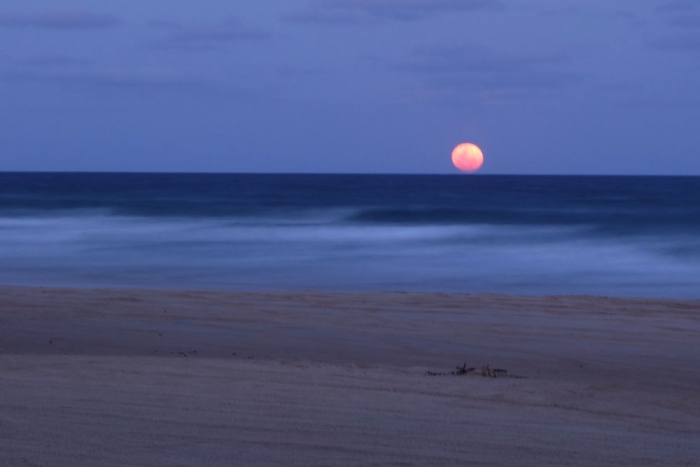 The next day we started out early (up at 5:30am) to beat the incoming tides. Our first stop was 'The Pinnacles', towers of wind-eroded coloured sands which we had passed the previous day as we drove up the beach to camp. 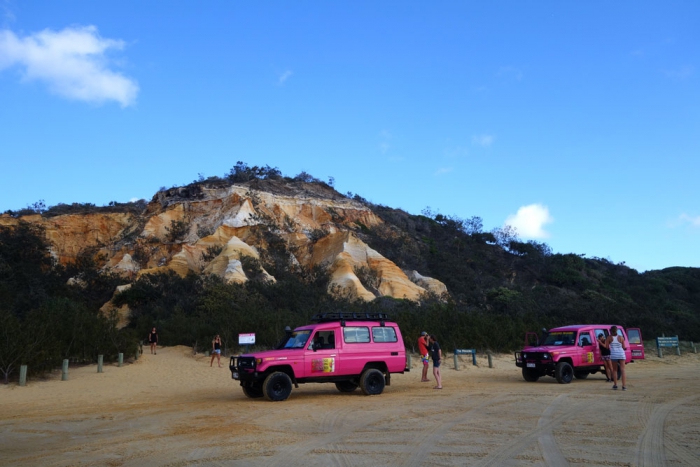 Next was a trip inland to Lake Allom, a tea-coloured lake filled with turtles. Not as many of us jumped into this one, but you are welcome to take the plunge and go for a swim. 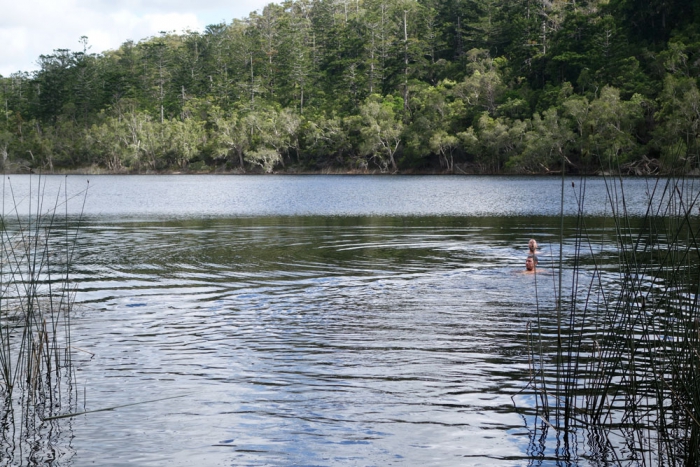 On the way back out to the beach from the lake we alighted for a quick uphill walk to Knife Point, a lookout over a huge sandblow - the biggest in the island. 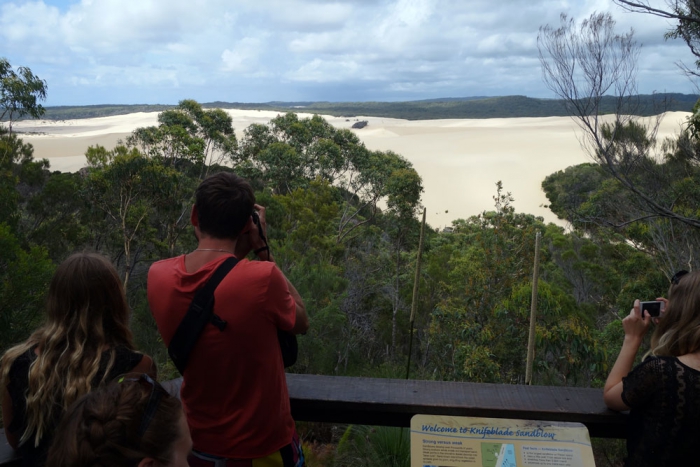 The remains of the Maheno Shipwreck looks spectacular as you drive past it on the beach. The retired vessel which ran aground there was used for explosives and bomb training by the Australian military leaving only the jagged rusting remains. It makes some great photos though so we were happy to jump out and take a look - no climbing on the rusty metal though! 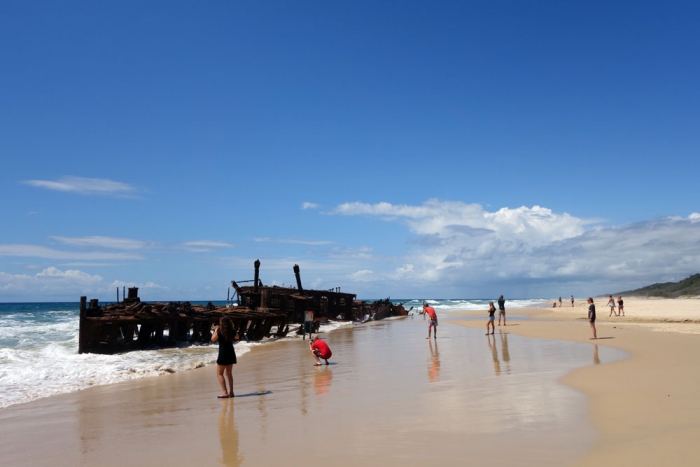 Eli Creek is a really fun place. A crystal clear creek, emerging from the island and onto the beach. Follow the path upstream, jump in to the waist deep water and float back down to the beach. I filled my water bottle upstream of where people where entering the water and haven't died so thumbs up on cleanness! Once you have got tired running up and down, you can just lie in the pool on the beach and watch the other tours arrive and leave. 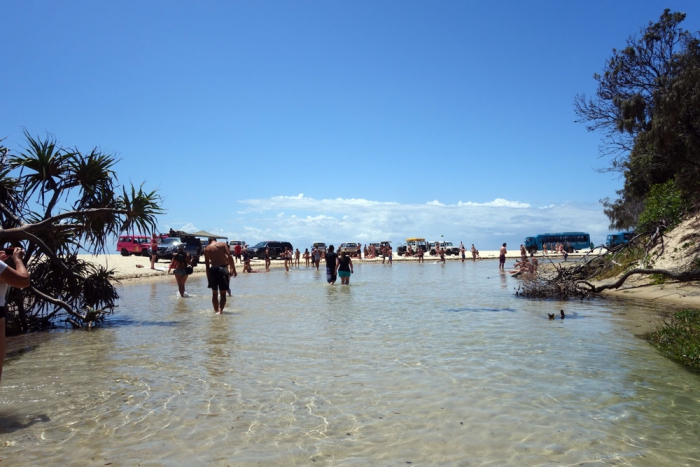 Our final stop of the trip was Lake McKenzie - a beautiful blue lake with white sandy beaches which is just begging for a swim and relax on the beach (kind of wish we'd brought our Kindles to read with all this relaxing). 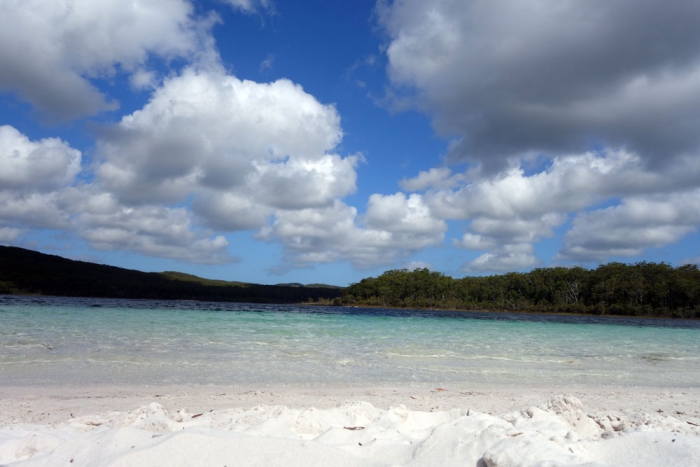 Having reached its relaxing finale all that was left in the trip was to head back to the ferry and make for home. One extra bonus on the way was our first sighting of a troop of wild kangaroos feeding close to the road which made Lisa very happy!

Thoughts on the trip

I really liked the trip - Fraser Island is a unique place and taking a 4wd tour is a good way of seeing it in a small group (although I think our group was smaller than most). Our driver Adrian (everyone called him Santa) was incredibly knowledgeable and his experience on the island shone through with his knowledge of everything from moon-rising times to recommendations (we didn't go to Indian Head and Champagne pools on his advice that they weren't going to be good in the current weather), friendliness with other guides and rangers and more. He really felt like he knew what he was doing and kept us laughing as we went. 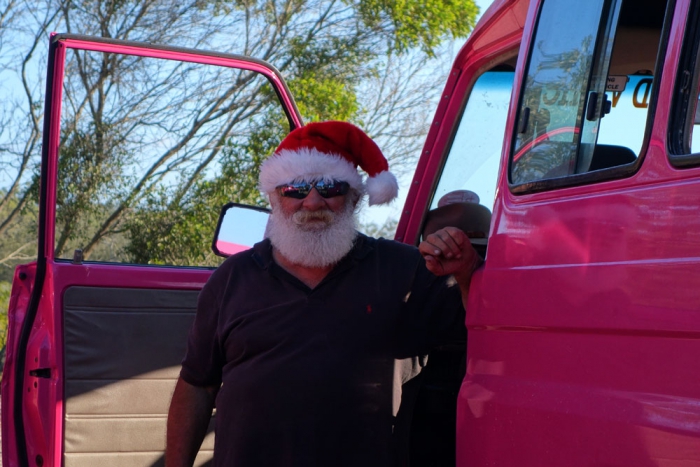 The drive is quite... very... bumpy so if you have a dodgy back or get car sick you might need to look for other options (although on those roads I'm not sure if there are any non-bumpy options!)

March Flies (we were there in November) are a pain - persistent, big and biting. Deet apparently helps but not by a significant margin in our experience.

There was also more walking than we originally had anticipated - I'd fortunately brought shoes but Lisa in her flip-flops ("thongs" for our Aussie readers) felt a bit under-equipped on the hot, sandy tracks.

One last thing - sun screen is a must - we'd been working our way north with the sun getting more intense as we go and I think this was our first run-in with proper strong sun for a long amount of time so we are now both a little crispy!