Snorkelling and Introductory Diving on the Great Barrier Reef with Seastar, Cairns

Written by Ali. Published on Tuesday, 18th November 2014
Our first experience diving as part of our one day diving and snorkelling tour from Cairns on the Great Barrier Reef with Seastar

Possibly thanks to a lot of bad movies, the one activity on our trip of Australia that I was most worried about was doing a dive or snorkel in the open ocean. The opportunity to dive and snorkel on the Great Barrier Reef however is one that cannot be ignored and we took the plunge (I've definitely already used that terrible pun before...) and booked a tour.

Getting a good deal for a reef trip

We decided to book in person in Cairns as the various tour agents can sometimes give you discounts on the tours giving you a price which is better than booking direct (just make sure you leave a few days so your tour doesn't book out). The next step is to prepare yourself to get ambushed on the street and sold to! There is a plethora of tour operators out there and we found that every agent had a different recommendation (normally introducing one we hadn't even considered before then!).

It comes in handy at this point if you are a good negotiator (we aren't!) as the agents can often drop the prices by a good margin (we got offered more than AUD150 off one of the trips); If you are booking more than one tour - in our case we were also booking a Cape Tribulation tour - you can get an even better one.

One trick we found was good was to say you were going to go elsewhere and check for a good deal and what their final number would be. The offer they give you back will often come with the threat they wont get it if you walk away and come back, but it can be good enough to convince to you take the deal!

We had heard of Seastar before coming to Cairns, mainly through them being the highest rated reef trip on TripAdvisor (at time of writing). I'm not one to put a lot of weight on online reviews however so we made sure to ask different agents and tourist information people about them before we made our decision. 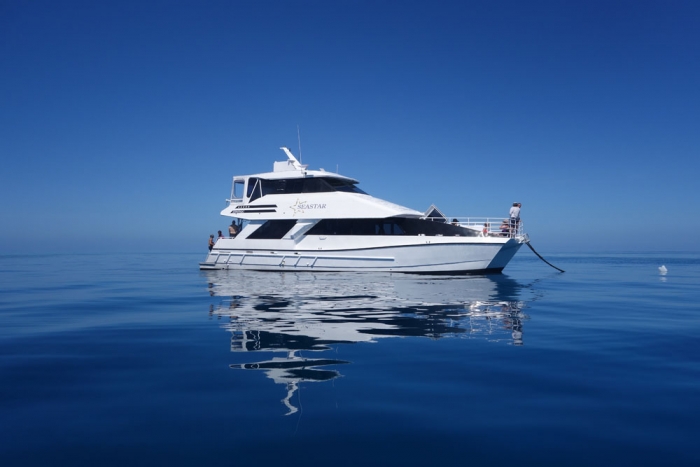 Seastar is quite a small outfit, claiming the advantage of having a small number of people on the tour (a maximum of 35) which I was very much a fan of. When diving or snorkelling a reef there is a considerable difference between 35 people and 100 splashing about in the water and I would venture you'll have a much better chance of seeing something different. Smaller numbers also means you get to know the other passengers and crew a bit more which is also a bonus! (Plus they are less likely to lose you, which if you are familiar with Open Water, you'll know is a good thing!!). This does come with the compromise of Seastar being a bit more expensive than other options but if there is one thing I'm happy to not take the cheap option on, it would be activities like this! The crew are all quite young but are knowledgeable, friendly and enthusiastic. They make you feel very safe and all seem to know what they are doing. 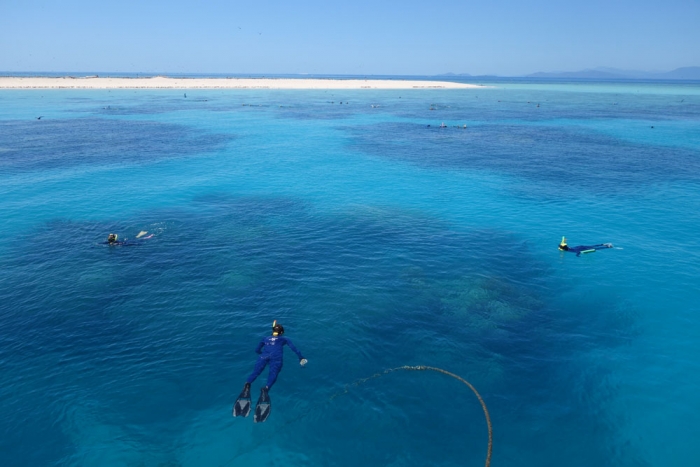 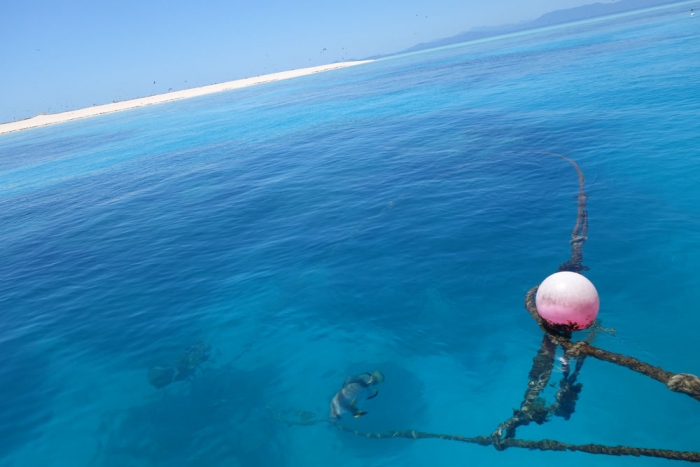 After the scuba dive, snorkelling was surprisingly easy, much more so than our first snorkel with Ocean Rafting in the Whitsundays. Snorkelling at Michaelmas Cay (a small bird-covered Island on the middle reef) was also a great step closer to more open water, being on a relatively sheltered and shallow part, near the cay itself. Some people swam straight off the boat but most had a more gradual introduction to the water from the cay's shore which would be nice for a first time snorkeller. 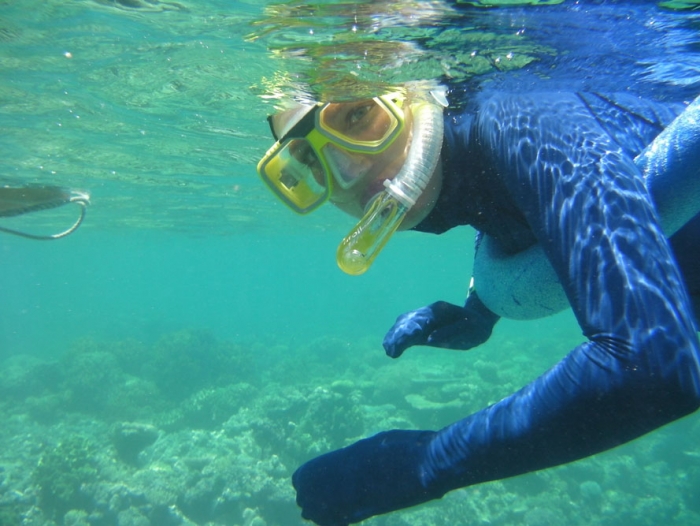 After plenty of time to explore, we were all brought back in board to sit on the deck and enjoy a well deserved lunch of salads and cold meats then it was off to our next stop; Hastings Reef. 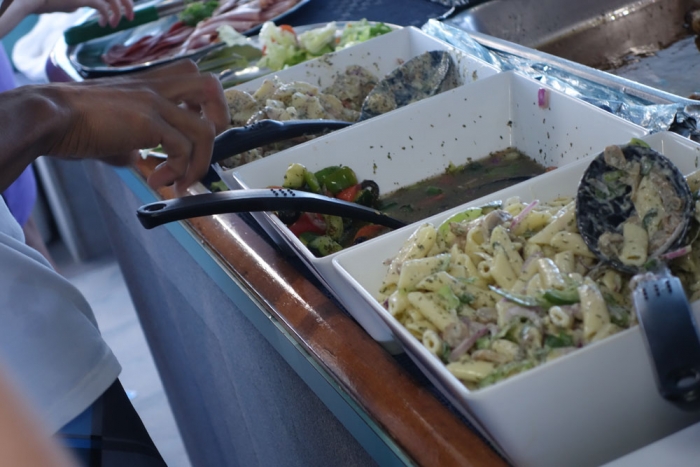 As we were queuing for lunch Lisa noticed a sting on her lip, a little like a nettle sting (a common, mild-stinging UK plant in case you don't know what a nettle is). The near-invisible, highly toxic, irukandji jellyfish is a constant terror on the north east coast so we thought it was worth making sure it wasn't one of those. The crew were lovely and chatted for a while, keeping an eye on it and eased the sting with some hot water and within a few minutes it was subsiding. Mini-scare over! 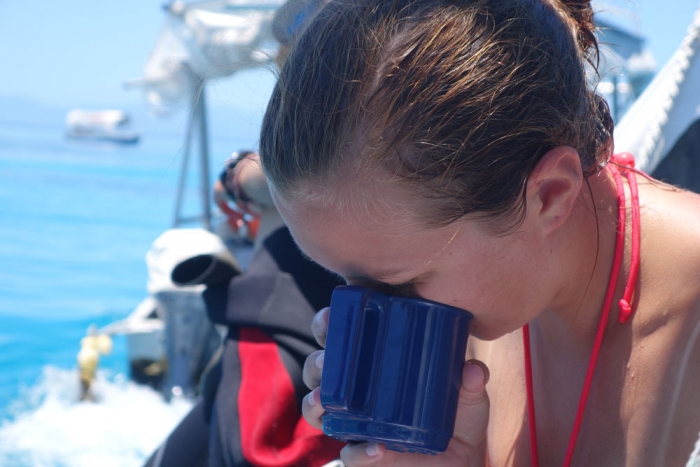 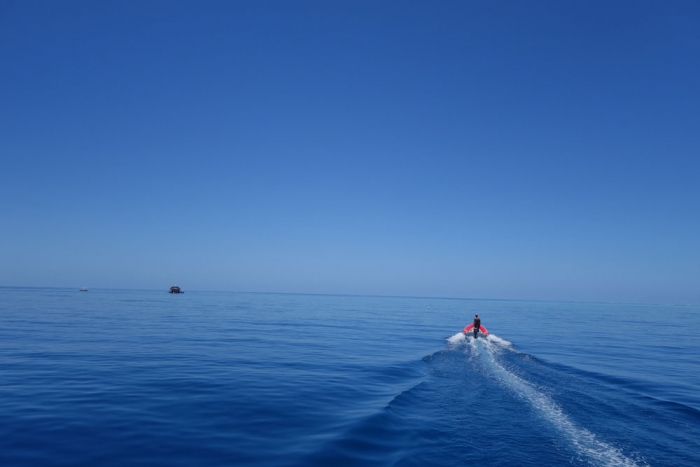 I'm by no means an expert on the best parts of the Great Barrier Reef, but Hastings Reef was a really cool place to snorkel. Without the slit of the cay, the water is clearer and being on the outer reef there is a much more interesting variety of fish and coral. One of the crew told us that you would only get about 20 days in a year with as good conditions as ours; 25m visibility, 30 degrees with almost no wind. 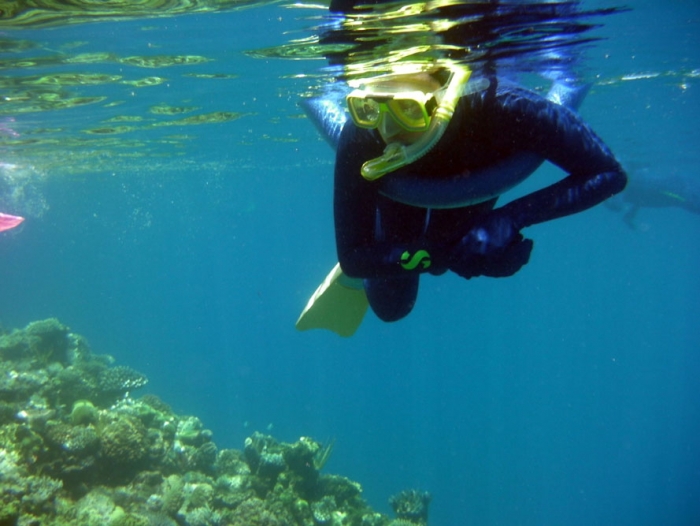 Going straight to snorkelling this time around meant we could take advantage of one of the guided snorkel tours which we had missed at the first location. It was so much better having a guide the second time around - they knew the reef better so instead of us randomly wandering, hoping to stumble across something ourselves, we got to see a great variety of spots in a short space of time. It was also fun to watch our guide free dive down to grab a sea cucumber or peek under an overhanging part of reef. 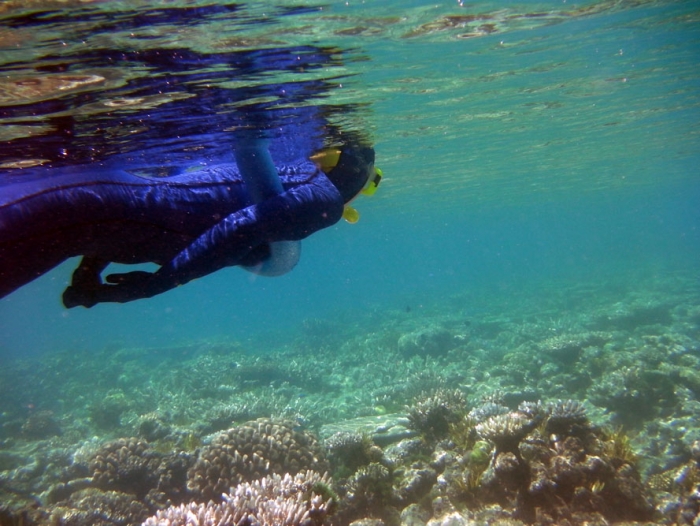 As the tour drew to an end, we were drawn to the calls of some fellow snorkellers who had seen a turtle. Swimming over, sure enough there it was, slowly swimming under the surface. Very cool indeed! 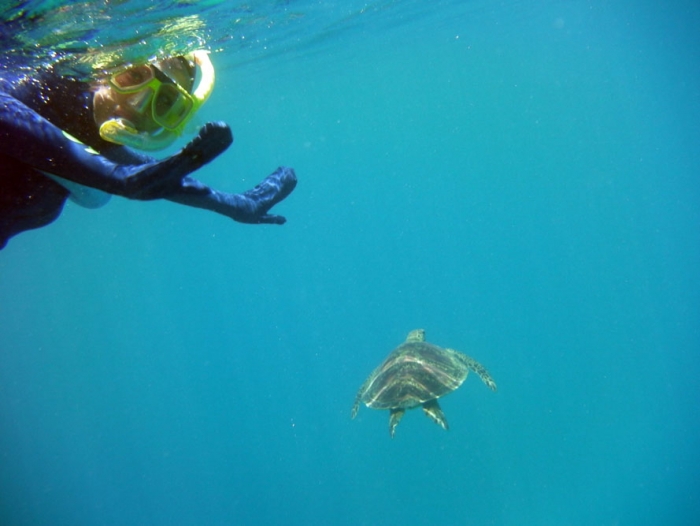 After about 2 hours we were getting tired and decided to swim back to the boat, just in time, it turned out, for a ride in Seastar's glass bottomed boat. We'd been warned that you would see a lot more if you continued to snorkel because the boat can't get into as shallow reef as swimmers can, but we didn't mind - it was a nice way of winding down from the snorkel and gave us a chance to dry off a bit more and ask any questions we'd had from the snorkel. 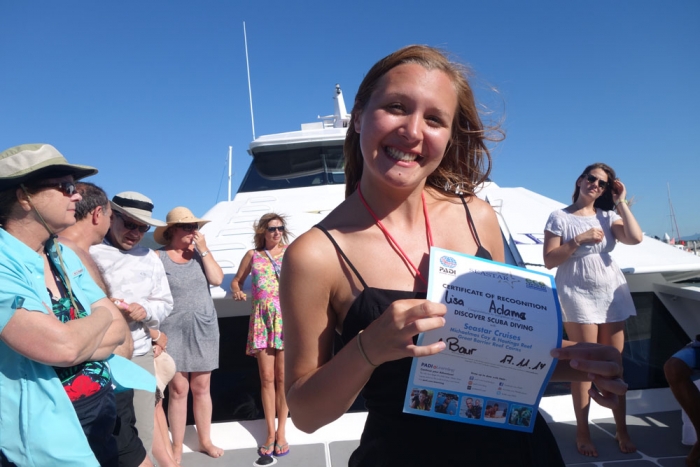 Finally it was time to end the dive and head back. We lay on the small front deck of the boat enjoying the sun and chatting about the dive and snorkelling, retrospectively translating some of our frantic wavings and pointings. It was a nice time to pause and reflect on one of the more different things we've ever done.

When booking a dive be careful about when you fly afterwards, if you fly within 12 hours of a planned dive, operators may not let you go down. We were flying out the next morning, about 18 hours after the dive so to be safe Seastar made sure we were on the first dive group (there was only one anyway) and said we would only be able to do one dive (which was fine by us!).

I mentioned this in the Whitsundays article but definitely grab a 'noodle' or other flotation aid for snorkelling unless you are a really good swimmer. Swimming for 2 hours without touching the bottom to rest is pretty hard going - we certainly wouldn't have been fit enough to do it!