Written by Lisa. Published on Monday, 24th November 2014
A brief overview of how we spent 3 days in the pretty cool city of Singapore.

Apologies in advance - this is a bit of a long post!

Day 1: Two movies and an introduction to hawker stands

After arriving into Singapore and our hotel after 1am we ended up losing most of our first day to lazy activities. We woke up and went for breakfast with the intention that we would go out and explore but when we came back to the bed, I (accidentally) fell back to sleep and so we didn't end up leaving until the afternoon.

I was very excited about the release of the next Hunger Games movie and so we decided to frequent one of the cinemas near the hostel to watch a matinee given that it was released the day before. The cinema (Golden Village Suntec) was very nice and just like our cinemas at home and pretty cheap to boot. 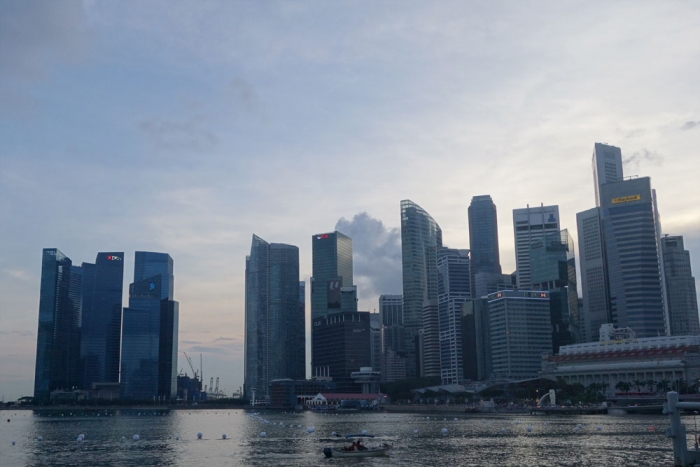 We had also read that there was an outdoor cinema not too far way as well which would be screening 'The Holiday' that night for free so we thought we might as well check that out too (we have a mild film addiction and have been sorely missing these whilst travelling). En route (or rather a little bit of a detour), we went to a hawker centre down by the marina called Gluttons Bay and found some pretty cheap food (FYI our favourite dish in Singapore was probably Black Carrot Cake which is most definitely not a dessert or baked good, it is a yummy flavourful main dish). 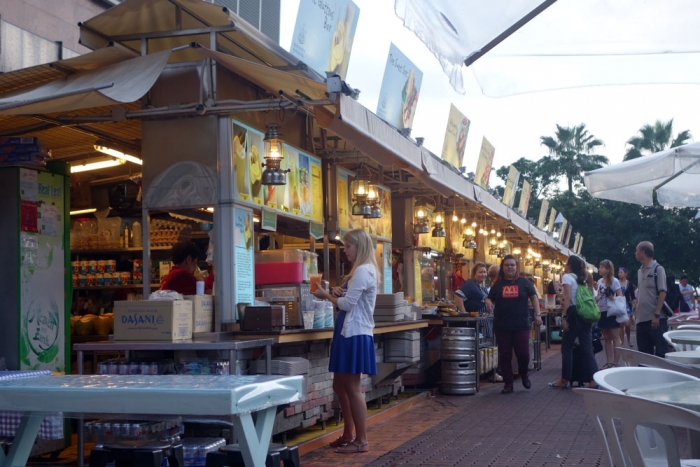 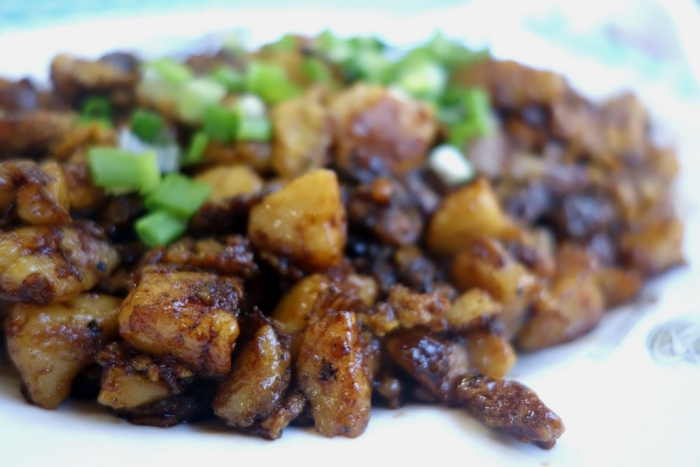 Mmmmm - Carrot cake (not a carrot in sight!)

The outdoor cinema was very atmospheric although it felt odd to be watching a Christmas movie outside in baking heat! It was then back to the hotel with us for a proper nights sleep.

Day 2: Walking to Gardens by the Bay and light shows

We decided to head towards the Marina Bay Sands area for the second day. We walked from the hotel which was a bit of a trek in the end but did allow you to walk around the bay towards the hotel which is very impressive and the skyline is incredible.

On the way there we dropped into Funan 'Digital life mall' which is essentially a 5-story shopping centre filled with only electronics stores. Needless to say Alistair was happy! 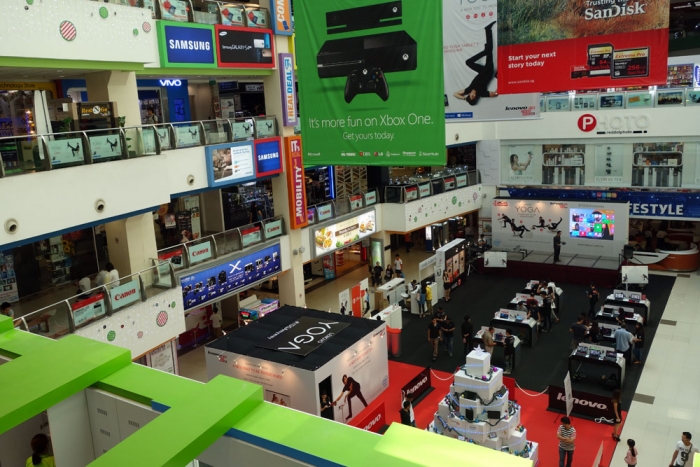 Our next stop was Gardens by the Bay. If you aren't aware of this, it is famous for the huge futuristic colourful trees but does have a lot of other gardens and sights too. 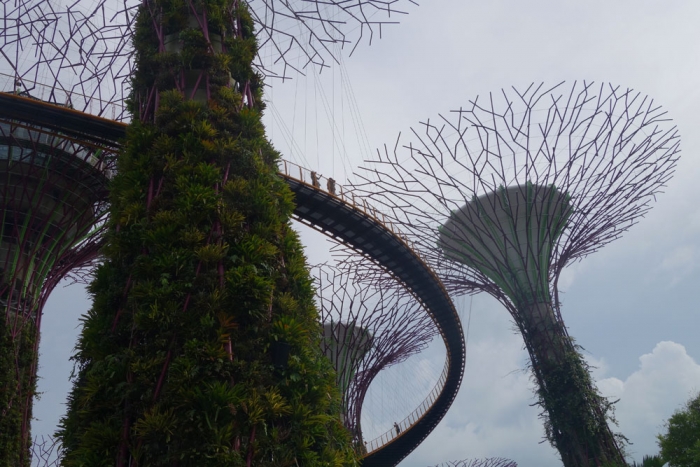 There are two huge conservatories that you need to pay to enter (the tourist price is advertised everywhere as including both conservatories whereas locals can pay for just one. We asked at the desk and tourists CAN also buy a ticket into just one of the conservatories for a little over half of the price for two)! We decided to go for the 'Cloud forest' one as it sounded the most interesting. There is a large man-made mountain and waterfall inside and a walkway from the top to the bottom. It was definitely a different sight to see and I'm glad we paid to have a look inside at what the hype was about. 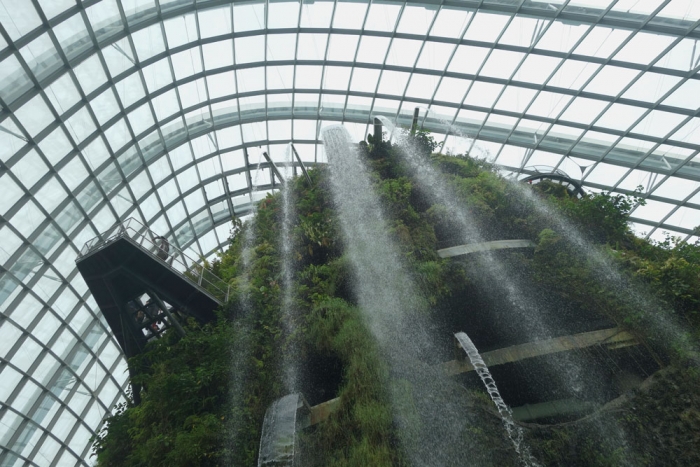 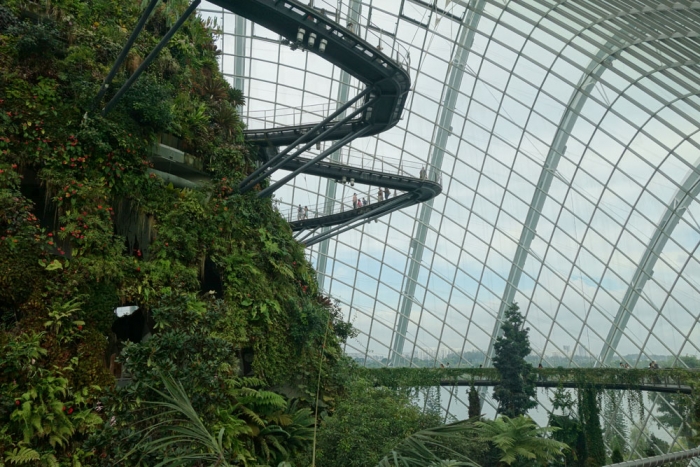 That evening we started off by watching the Gardens by the Bay light show which is held in the futuristic tree bit. Our show was themed for Christmas with festive music playing and the trees lighting up to the music, I really enjoyed it and would highly recommend checking it out. There are 2 shows every night lasting around 15 minutes each. 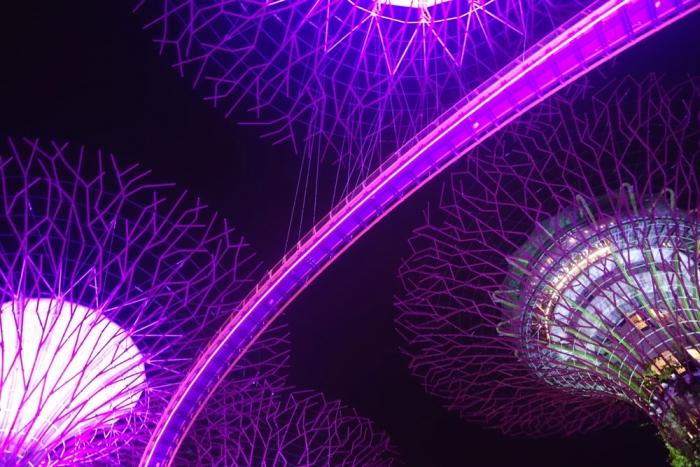 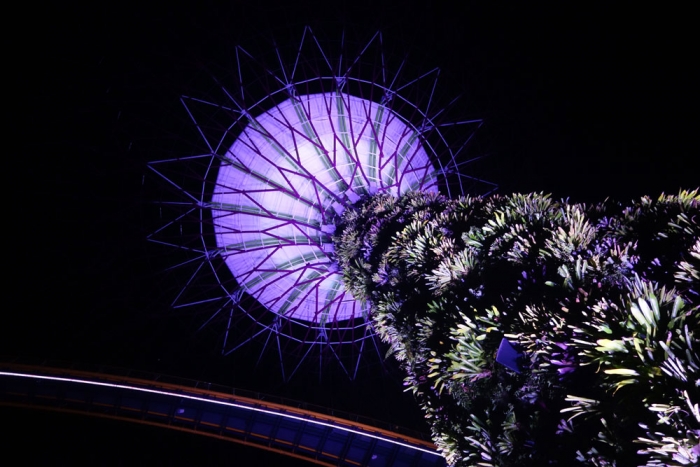 The music is a bit loud in the video - make sure you aren't watching this at work with the speakers on!

We decided to eat in the food court at the Marina Bay Sands shopping area which was probably the cheapest food you could find in the area. There are loads of bays selling different Asian foods so you can browse and pick your favourite.

Our plan was to go to KuDeTa after this (the rooftop restaurant and bar at the top of the marina Bay Sands hotel) but when we went to enquire we discovered that there is a strict dress code and men must be wearing trousers to be allowed up so we ended up deterring this plan to the next night. 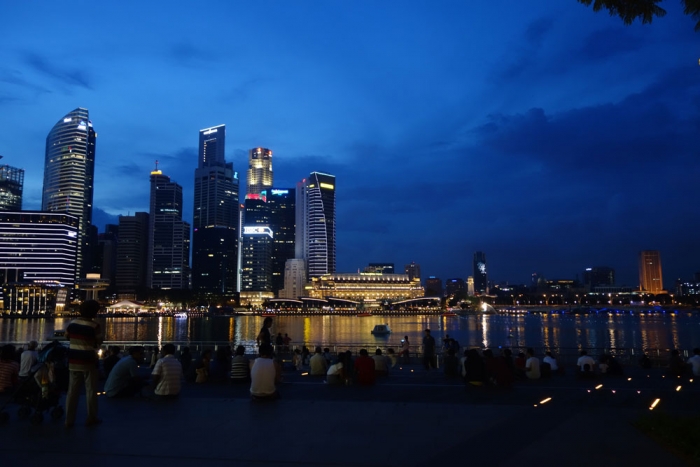 We finished off by watching the Marina Bay light and water show which is in front of the shopping centre on the bay. Images are projected on the water with music...it could have been very cool but I honestly found the story a bit strange and pointless. It is still worth checking out however to see how they project onto water and there are also two shows of this every night, again both lasting 15 minutes. 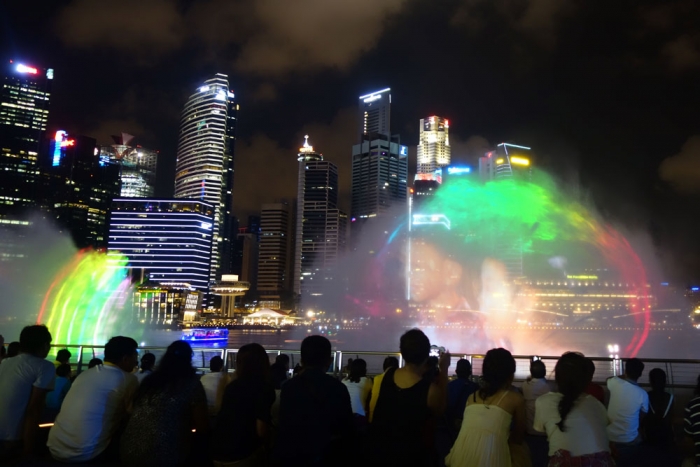 We started this day off by heading to Orchard Road, the famous shopping area in Singapore. If is very pretty to stroll along and take a peek into all of the super expensive designer stores. Alistair decided to buy some smart/casual trousers here and managed to find a New Look amongst all the high end brands! 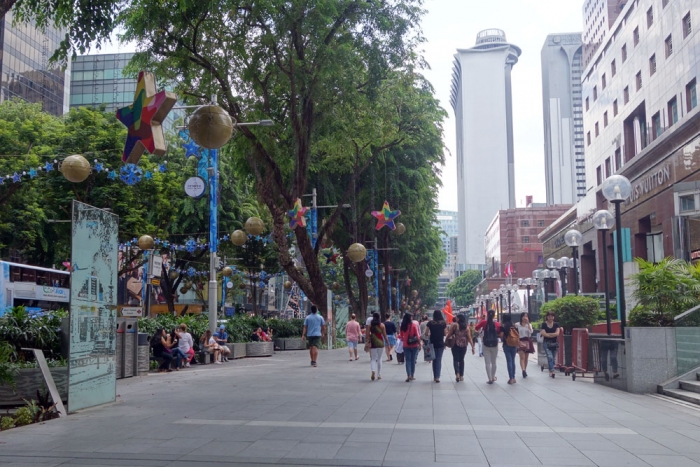 After this our next stop was Singapore zoo. It had been recommended to us by fellow travellers and it is supposed to be one of the best zoos in the world. It is a little bit of a trek to get to on public transport (we took 2 subway trains and a bus). Unfortunately it was very very rainy in the afternoon and so it was a little bit miserable to walk around. Some of the enclosures are quite cool though in that the animals appear to be free to roam and not closed in, especially the monkeys (one of which was sat just at the entrance to the park on a wall!) 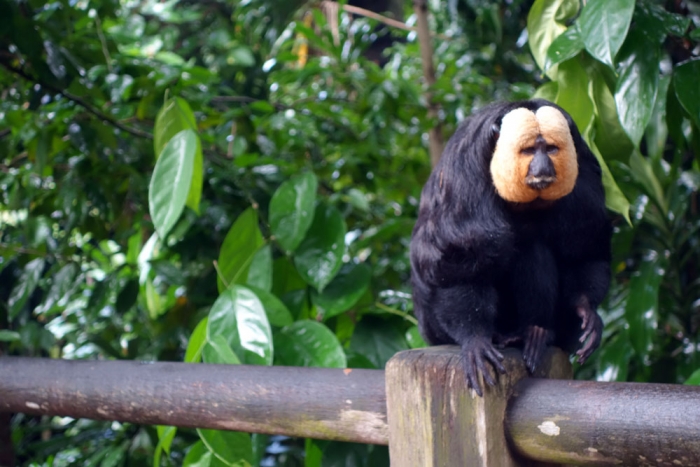 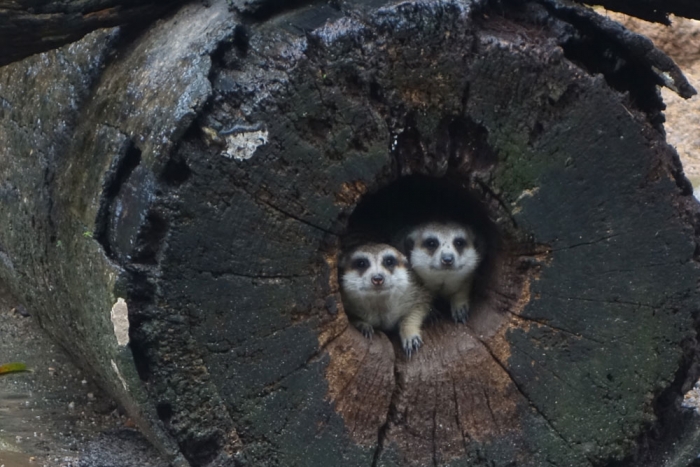 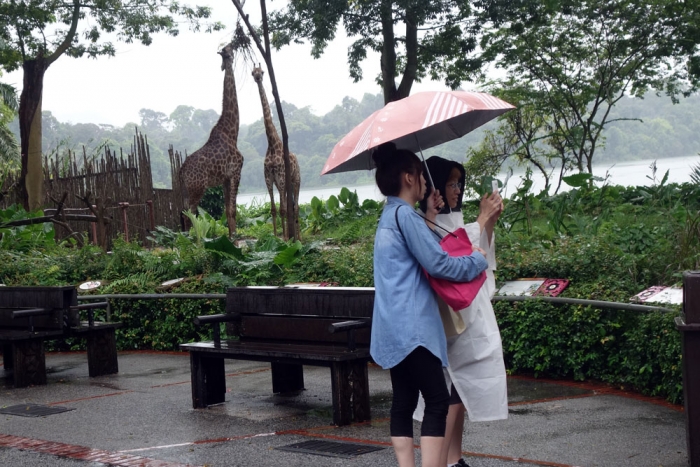 Before heading to KuDeTa we needed to grab some dinner and so we went via Chinatown where the famous Maxwell Hawker centre is. 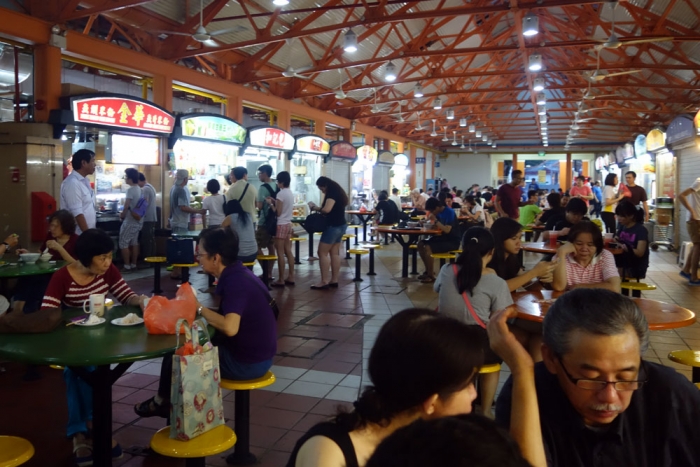 We stopped off at the Buddha Tooth Temple which is just across the road from the hawker centre as well. It stands out architecturally and is very colourful and beautiful inside. It is supposed to have one of Buddhas teeth inside but I believe we arrived too late in the day to be allowed upstairs where I think it is on display. 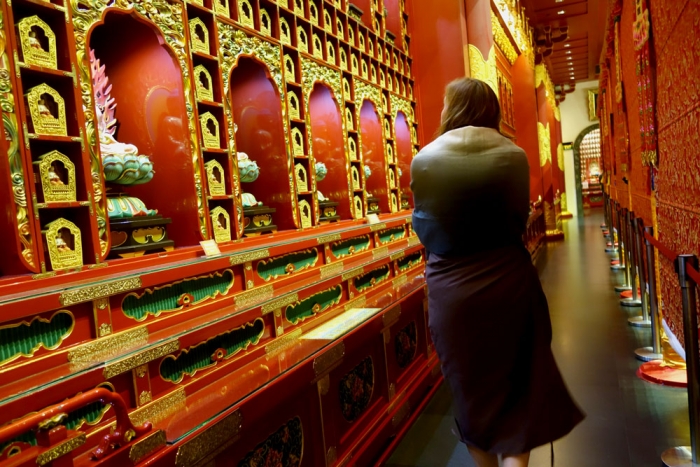 We ended the evening with cocktails at the top of the Marina Bay Sands hotel. The view is absolutely incredible and it was such a good way to end our time in Singapore. The observation deck is actually just underneath the bar and so I would definitely recommend going to the bar instead (there is no cover charge on weekdays and before 9pm on Fridays and Saturdays) and then using the money you would have spent on entry to the observation deck on a drink! 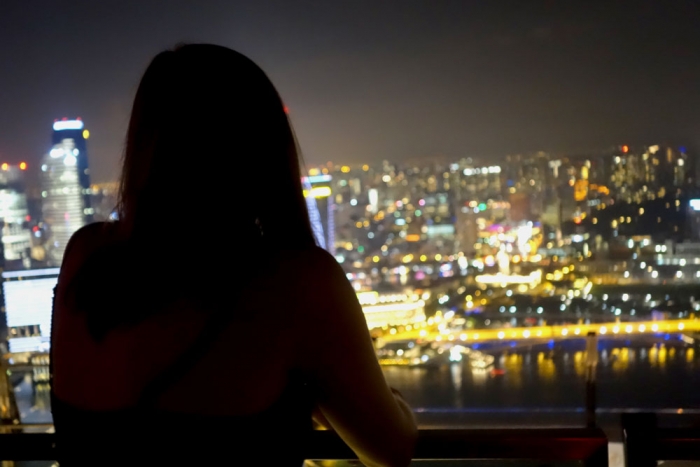 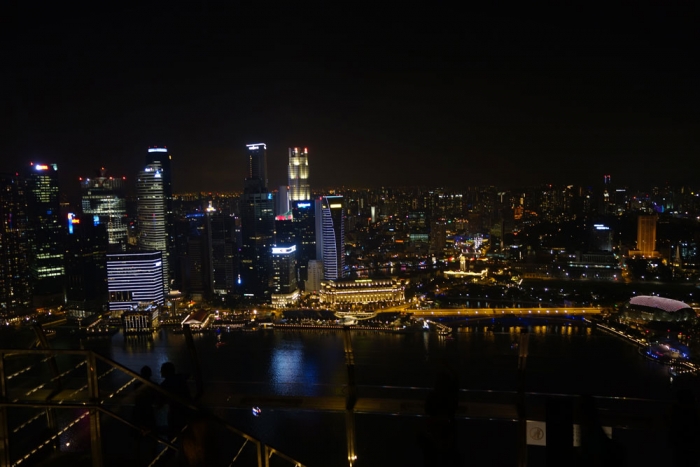 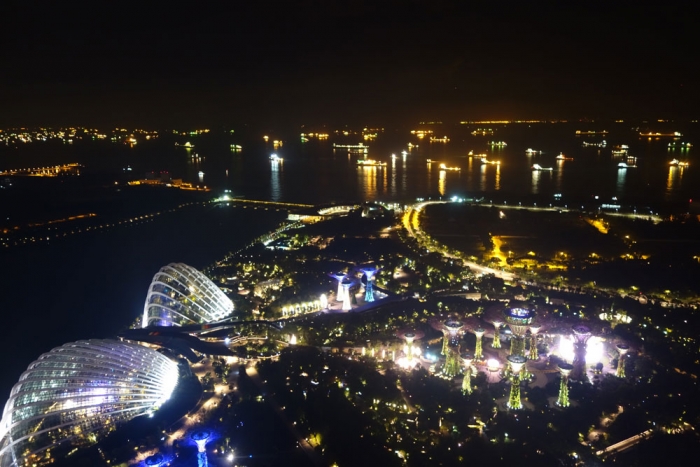 We also had a peak around at the sky lounge and the infinity pool which is for guests of the hotel only and it is fairly impressive. At some point in my life I will definitely be back to stay at that hotel!

Getting around in Singapore

When we arrived at the airport we could have used the MRT to get into the city for just over SD2 each. Unfortunately we landed so late that they had stopped running and so we went to the Ground Transportation Desk to find a shuttle to city. These are SD9 each and take you directly to your hotel. We had to wait a bit for a driver to turn up which was a pain but otherwise it was pretty handy at that time of night. 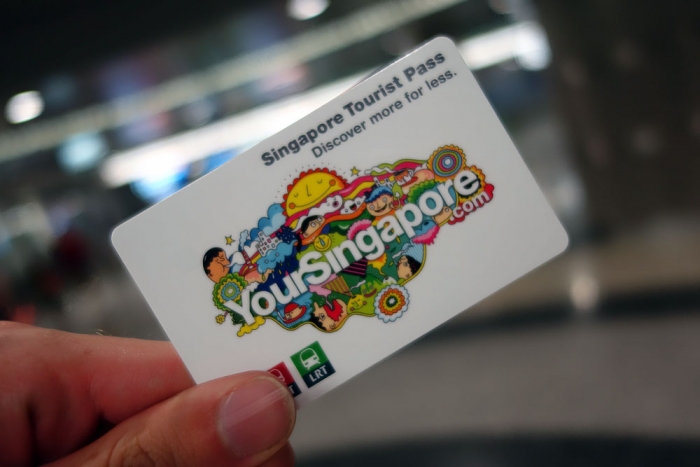 The MRT is the most used form of transport however. It is super clean, cheap, regular and fast. You can buy single tickets for journeys (which didn't seem to go above SD3 each) or you can buy a tourist pass which offers 1, 2 or 3 days transport for SD 10, 15 and 20. They can only be bought at ticket offices and you must pay a deposit of SD10 for each card which they will return to you if you drop off your pass at any ticket booth in the city or the airport station. It is also worth noting that you can use this pass for bus travel too (so we bought them the day we travelled out to the zoo and had all those other stop offs).