Written by Lisa. Published on Wednesday, 3rd December 2014
Our very brief (and wonderful) experience of an all inclusive resort in Nusa Dua, Bali.

After arriving into Denpasar, Bali and the chaos surrounding that trip, we decided that we deserved a bit of a 'holiday' within our travels. We hadn't really stopped since leaving the UK, constantly seeing and doing things and I think our experience that night was just the last straw.

We had been toying with the idea of booking a few days in an all inclusive resort on the Southern coast of Bali as we have never been to one before but hadn't committed to anything as we kept feeling as though we couldn't justify it in our budget. That night however we decided to throw our common sense out the window and treat ourselves (and try not to think about the budget). That is how it transpired that we were sitting in our hotel room at 2am trying to find the best resort that we could realistically afford for the next day.

In the end we chose Sol Beach House Benoa which is one of the slightly cheaper resorts but we were then able to pay for their best room type and their best all inclusive package (the Gold package).

Super excited to begin our 4 nights and 5 days of relaxation, we woke the next morning and decided to travel to the hotel in a taxi to eliminate as much horribleness as possible (which, believe me, is something we never do; we always try to navigate public transport and end up stressed to the max). It turns out the 45 minute trip only cost us about £9 which is unthinkable in the UK and we got there safely and in comfort!

I'll try not to bore you with too many details of our stay but I'll try to summarise the bits that stood out to us (both good and bad).

When booking the hotel we had requested a walk-in shower rather than one over the bath if possible and room not on the ground floor... unfortunately as we had booked it in the middle of the previous night, the room they had available fulfilled neither of those specifications. Don't get me wrong, the room was still huge and quite nice but wasn't quite what we had hoped and dreamed for. Alistair did ask reception if they could change the room and they told us that unfortunately they wouldn't be able to for a day or so but to come back in 2 days and check. We accepted this but the next morning had a very nice phone call from reception telling us that we could move rooms that morning! I must say, the room that we were changed to was so so much better. It had a walk in shower, a private balcony and was on the top floor. I also hadn't noticed the musty smell in our first room until I walked into the amazing flowery smell of our new room (and so 'non smoking room' has now become another one of our requests).

We have never complained about a room before or asked to be changed but this has shown us that if you aren't happy then you should say something as it may get rectified and you end up in a much more comfortable room!

It took us all of one day to get used to the fact that we could eat and drink whatever we wanted. As we were on the gold package we could eat at any of the restaurants and they had an extended menu for gold customers, we could drink at any of the bars including alcoholic beverages and again, gold customers could also have wine from the drinks menu. I figured I would be happy with cocktails anyway but actually, couple of days in I started to appreciate the fact that I could have a glass of wine instead of a super sugary cocktail (its worth noting that a lot of the other hotels do not offer wine in their all-inclusive packages). In terms of the other alcohol, only local beers and spirits were included. 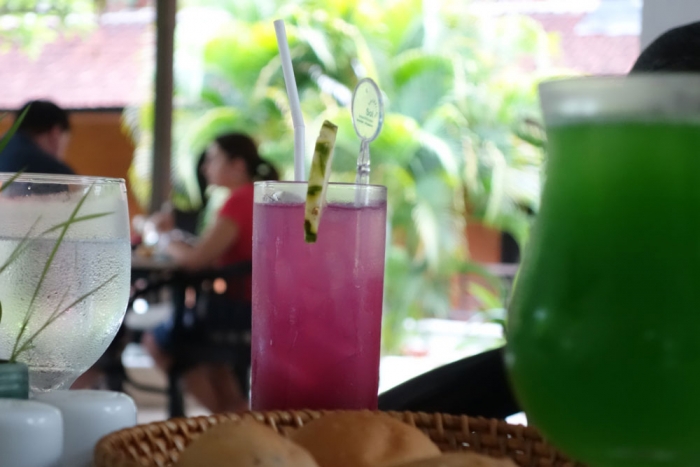 The breakfast is buffet and only served in one restaurant, it is quite extensive and yummy however and I gravitated towards the freshly made pancakes every morning! As a gold customer, you are also entitled to free room service but it wasn't until the third day that we realised this included breakfast as we didn't have a menu in our room for breakfast. Needless to say the next mornings we simply called room service and asked what was available and had absolutely delicious fresh meals in our room. 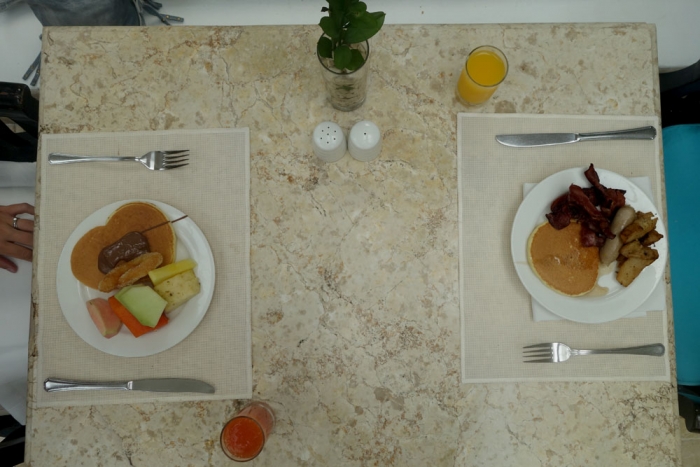 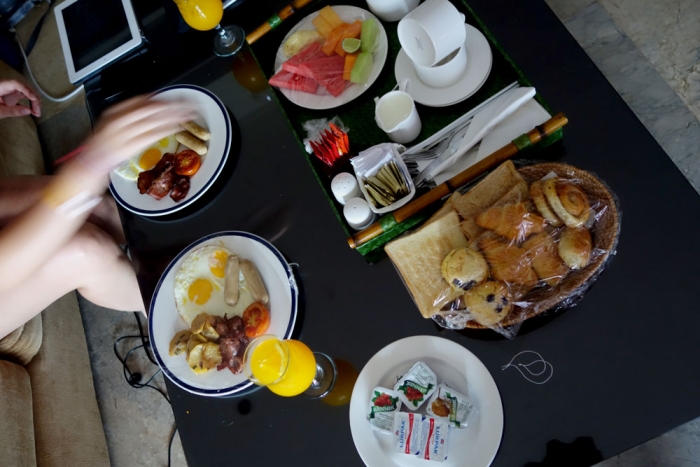 Lunch could be had at 2 different restaurants; One was a 24 hr a la carte restaurant called El Patio that had indoor and outdoor seating and served Spanish and Italian type food and the other was a buffet lunch which is served at the gardens by the beach. We personally preferred the a la carte menu much more and so only had the buffet lunch on one occasion! 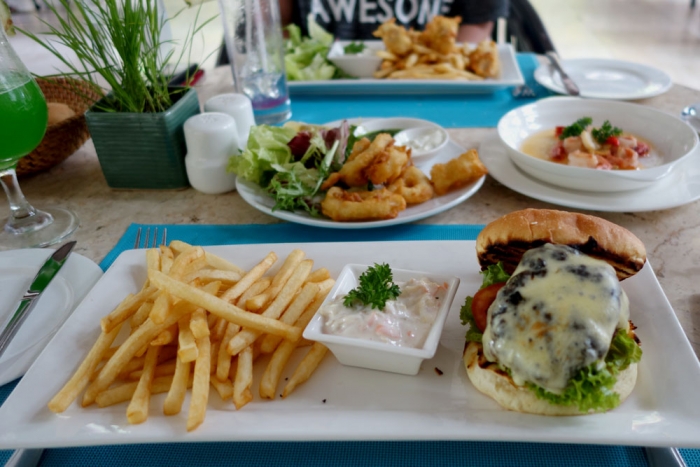 For dinner you had a couple of options. One was the same a la carte restaurant El Patio. Another option was an indoor Italian restaurant that was only open in the evening and required booking in advance. We really really liked this restaurant (I think because we had been craving garlic for a long time!) but unfortunately when we went back to book again on our final night, it was the one night of the week when it isn't open! 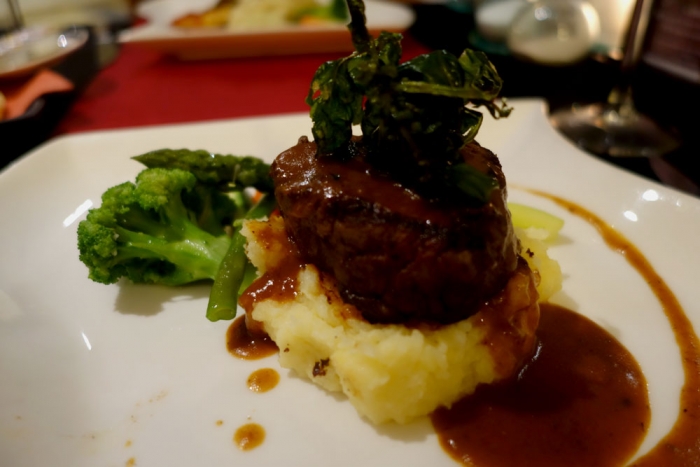 The other general option for dinner was to attend one of the hotels nightly entertainment shows. We attempted to go to one of these which was supposed to be on the beach itself with a seafood BBQ (Sunday night) but due to the weather this was relocated into El Patio and the entertainment was in the lobby area. We didn't actually eat there in the end so I can't comment on the food, but one of the other nights we stumbled across a show of Latin dancing in the lobby and it was pretty good and entertaining so I would recommend catching at least one of the shows! 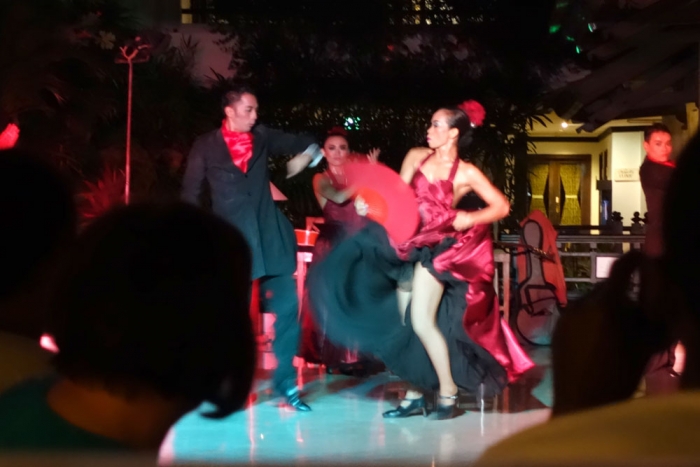 The rest of the time we had room service dinner which was a mixture of different dishes. We kinda figured why not as it was free and you can't normally order as much room service as you want! My only criticism of room service was the dessert menu (which I'd been inspired to abuse by Alex in wanderland's post) ; there was only one chocolate option and it was a not very nice mousse :(... also once or twice we had a bit of communication trouble: 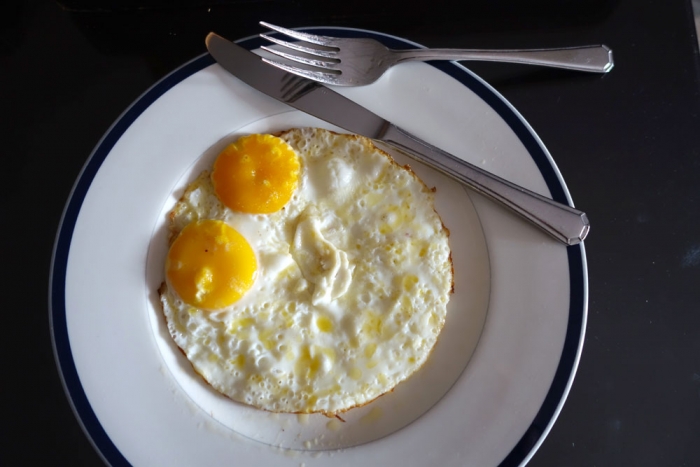 Alistair's breakfast one morning... I have no clue what I said to make this happen.

As well as being able to order drinks in the restaurants, there are two other bars in the hotel. One is in the lobby which we frequented in the evenings sometimes and there is another swim up bar at the pool. The drinks menu is the same everywhere in the resort so it doesn't really matter where you get a drink. 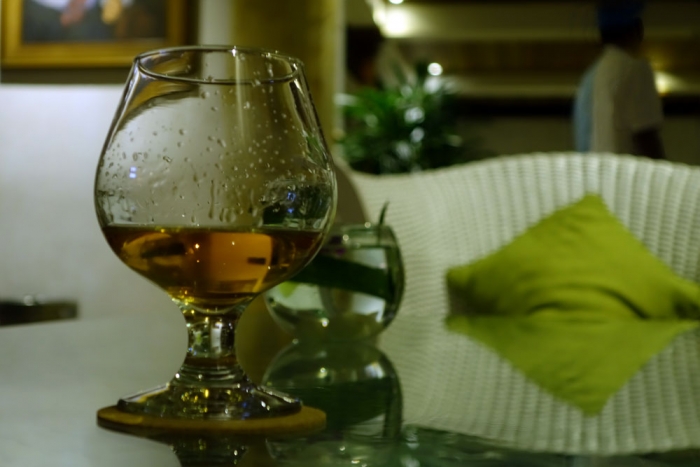 There is a spa attached to the hotel but I must say that the prices were a little inflated! As we had booked directly on the hotel website we were given 10 USD to spend a day and the only place we had left to need to spend money was the spa. I decided to chose one of the only options under 10USD which was a haircut. I must say I was fairly apprehensive returning for my appointment as I only wanted a very slight trim to get rid of broken ends...unfortunately she took about 1-2 inches more than that off but it actually looks alright! It'll just take a bit longer to grow my hair now... 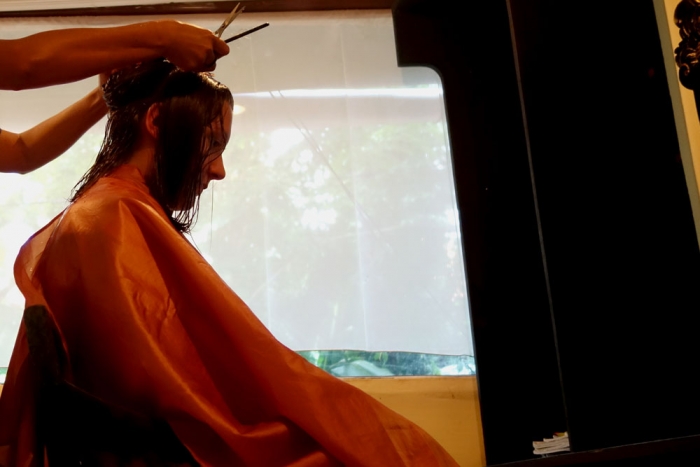 We didn't book any other treatments at the spa but we had read about a good local massage place across the street called Carla's spa. I really wanted to have a Balinese massage and so dragged Alistair along with me. It was very clean but basic and super cheap at 65k each for 1 hour (about £3.25). I really enjoyed it and I think Alistair found it OK as well (but having had another massage in Ubud I think the Ubud massage was much better).

The resort has its own private beach with lots of different types of loungers and things to lie about on. We didn't take a dip in the sea so I can't comment on that but we did enjoy sitting on the beach and relaxing, drinking cocktails. Its not the prettiest beach I have been on but its certainly not bad! 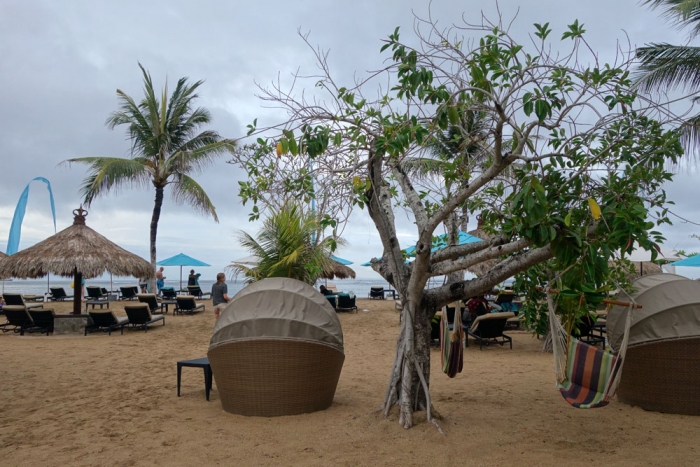 The pool is quite a decent size and clean. It was a nice temperature for a swim and was never very busy. I also did enjoy the novelty of the swim up bar as well! 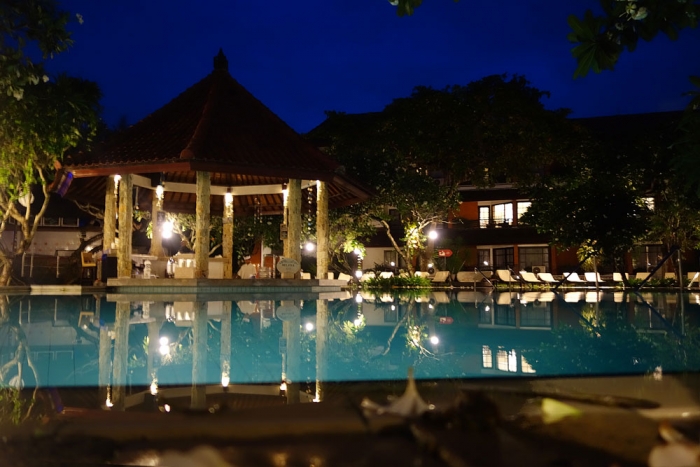 The hotel also puts on a range of activities every day that are weatejr dependent; from yoga to rifle shooting to flower arranging. We only went to one of these which was yoga. There were only three of us in the class so it was super personal and we did it on the garden next to the beach so the setting was awesome! 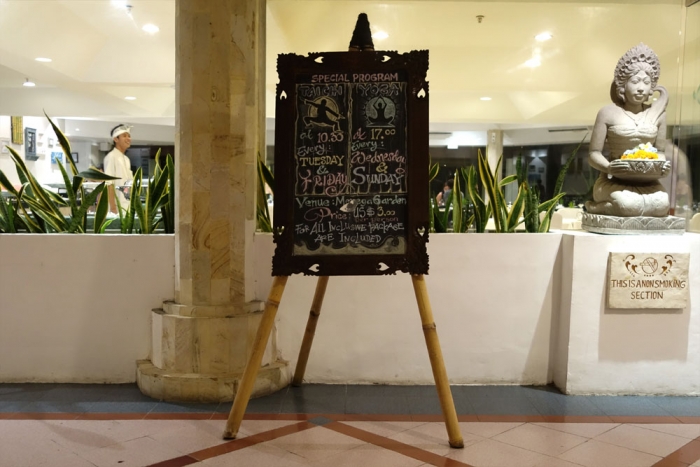 I really appreciated the break and the chance to relax and not have to worry about getting g places or finding food and drink. Having never been to an all inclusive resort before this, I would now say that myself and Alistair are both converts and would definitely visit one again for a chilled out holiday. As to whether or not Sol Beach House was a good choice I honestly don't know as I have nothing to compare it to, I enjoyed it even though its not the most luxurious place we have ever stayed and it did the job of what we needed at the time but I have a feeling that if you pay a little more then perhaps some of the other resorts may be better!

This was our only exposure to Southern Bali and the beaches down there. We didn't visit Kuta as it didn't sound like our scene and we can't really comment about this area outside the resort but from what we did see, I think there are prettier beach retreats in the world to visit and explore. It really depends on what you enjoy but since leaving there, we have much preferred the other parts of Bali that we have visited and would probably recommend just spending your time at those instead!

As always, the opinions expressed in this article are our own and we did not receive any discounts or compensation from Sol Beach House for writing this post.