Written by Ali. Published on Friday, 12th December 2014
What we got up to on Gili Air, a small island off Lombok in Indonesia, during our 5 days there.

Gili Air is one of the three 'Gili Islands'; a small chain of islands off Lombok in Indonesia. Amongst other unifying features, no motorised transport is allowed on the islands, with only horse-drawn carts and bicycles as the main transport option. 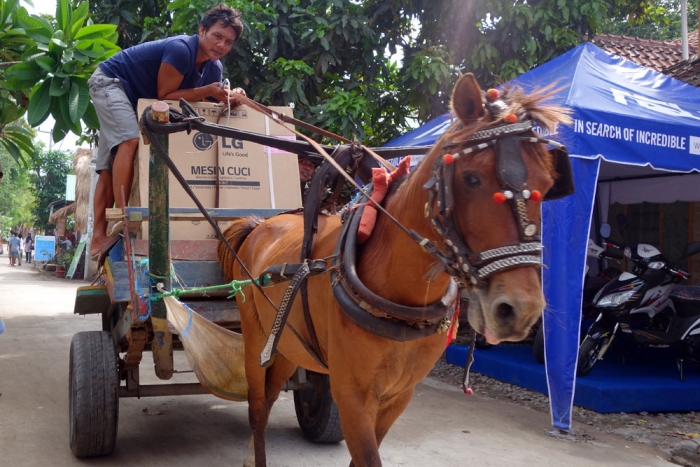 Very much like Goldilocks' bears, each of the three islands has a different feel to it:

Not doing very much

The short version of what we got up to on Gili Air is 'not much' and that, I think, is point of the place. Lazing away a few days felt like the perfect way to spend our time on this relatively quiet island. 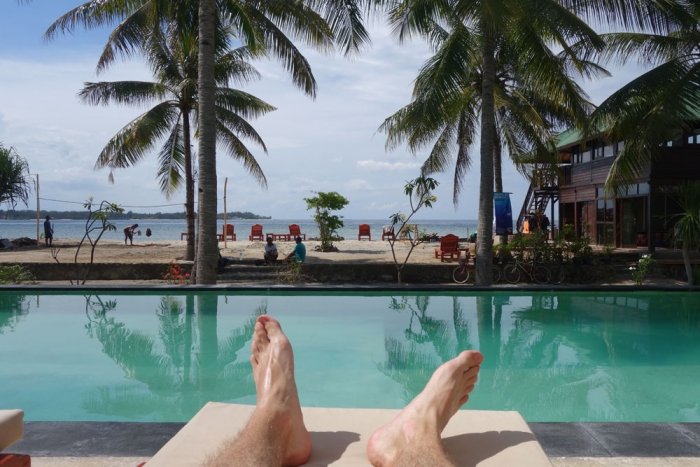 My view for 5 days

We were on the western - 'sunset side' - of the island which is the quieter part, away from the activity around the port on the south-east corner. It had the advantage of not having a lot of foot traffic but with that came the cost of not having as many restaurants close to the accommodation. 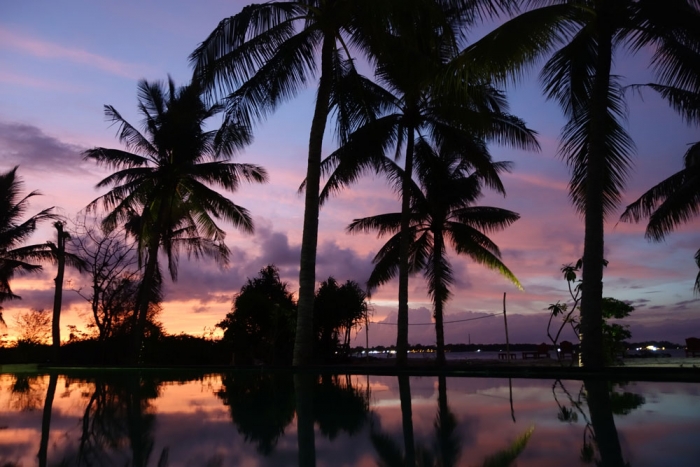 The island is so small that you can get to the main restaurant area without much effort (15-20 minutes' walk) but we realised that at night there aren't street lights and, although we may have been being overly cautious, we weren't totally keen on walking back in the dark through the more quiet parts of the island. In the end we ended up either eating at one of the few restaurants beside the accommodation or having dinner at lunch time and local 'pot noodles' in our room for dinner. 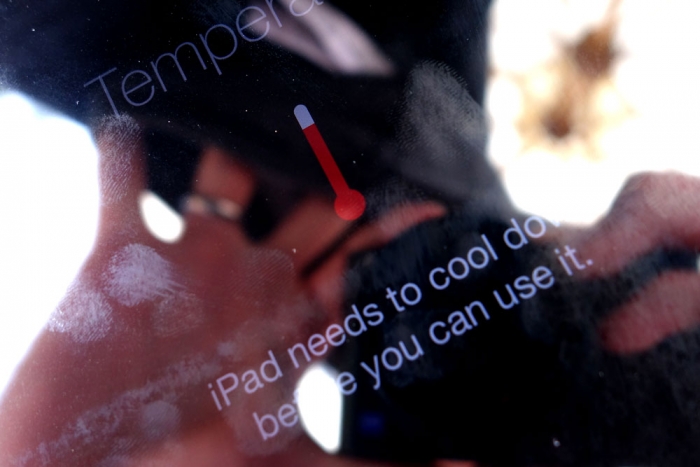 For people who are feeling a little more active, there are certainly other activities available, pretty much all of which are water-based. Gili Air does have snorkelling options (although we were disinclined to do them having very recently snorkelled at the great barrier reef and subsequently ruined all other snorkelling!) but the island's main attraction is the diving options. It was fun sitting by the pool watching people being taught to dive in the deep-end before they ventured out to the sea. We also spotted options for yoga classes so you can check those out too! 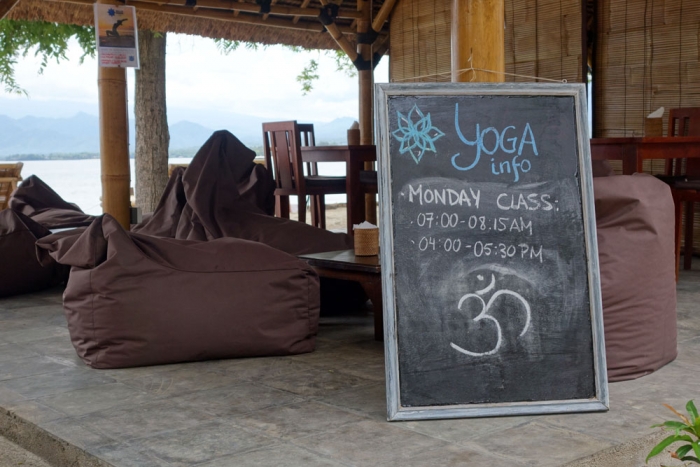 One of my favourite moments on Gili Air was one of our first meals; dinner at a restaurant/'warung' right beside our accommodation. As we ate at a table on the beach in the perfect evening temperature we were able to watch the sun set into the sea - a great evening! 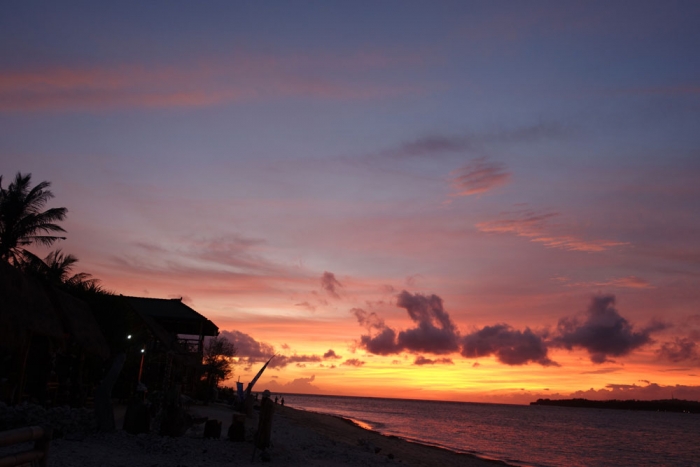 We'd made it through Indonesia with only the tiniest grumblings of the notorious 'Bali belly' but finally, just as the end was getting close, Gili Air got us. It's hard to know what it was that caught us out - taking a chance on ice in our orange juice one morning or just one of our meals getting contaminated - but it is safe to say it happened somewhere along the way with Lisa bearing most of the brunt of it. 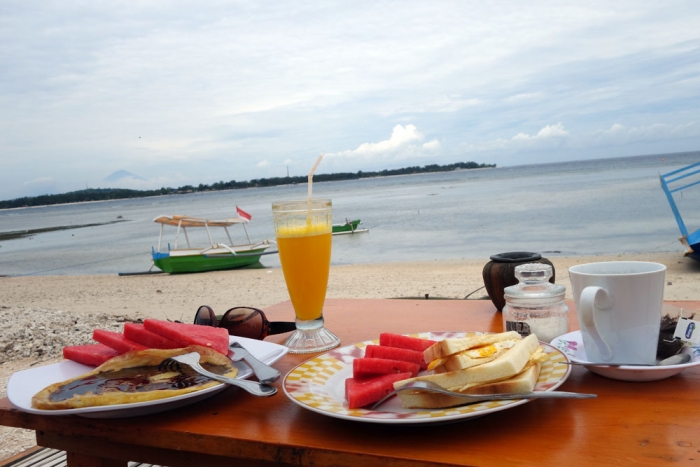 It just looks so tempting....

The final two days of Gili Air was spent in or near the refuge our room without venturing out very much, with stomachs that permitted only the most tentative attempts to eat.

I still managed to get out and eat my new favourite Indonesian dish - Tumpi Tumpi Potatoes - balls of mashed potatoes deep fried in a spiced batter. Lisa was happier with plain rice!

If we were to do Gili Air again, I would maybe stay closer to activity and accept that things might be a little busier. Being closer to the main group of restaurants would mean you have a much greater variety of food options near to your accommodation, allowing you to stay out a bit later for a meal and walk back through the more active and well-lit part of the island. 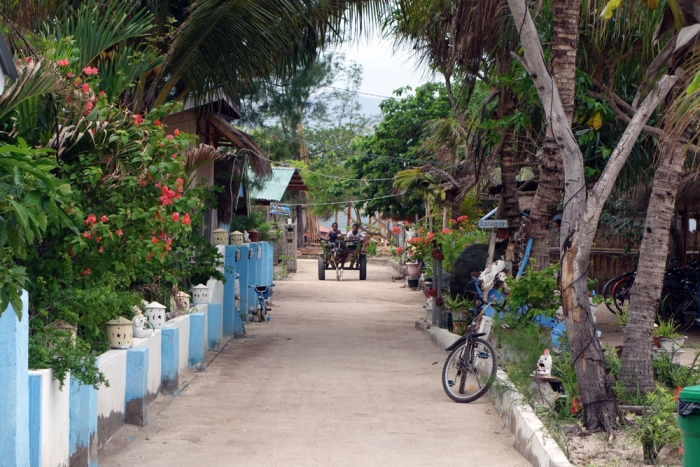 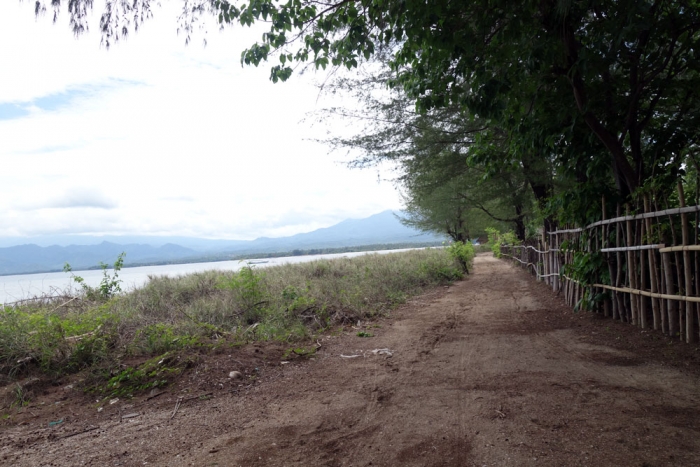 I don't have any specific examples in mind, but my gut impression would be that a place on the east coast of the island might be a good place to try, even if your sea view might be taken up by the Lombok mainland. That region seemed to boast the best set of eateries. 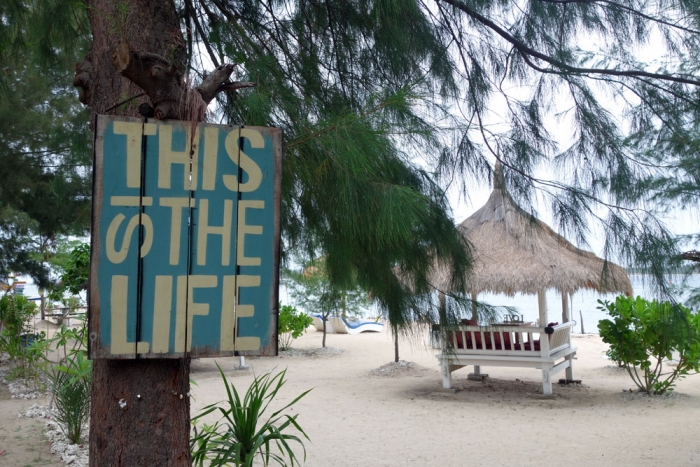