Los Angeles: it's all about the movies (and TV shows...)

Written by Lisa. Published on Saturday, 16th May 2015
Enjoying a few days in Los Angeles, trying to stalk celebrities, fulfilling a lifelong dream of seeing the 'Friends' set and (kind of) getting onto a National TV show.

Out of all the cities on the west coast I had been looking forward to Los Angeles the most. The sun, the film locations and studios, the celebrities; I couldn't wait to see it all for myself and whether or not it lived up to its portrayal on TV and in films.

I don't think it seemed quite like what I imagined but I still completely enjoyed the atmosphere and the activities that we did (we didn't even go to Disneyland and I am still saying that which is something!).

This was the first activity that we did after arriving. I was desperate to see the Hollywood sign and Google told us that it can be seen from Griffith park as well as the observatory having great views over the city and generally being a cool place to visit.

We hopped off our bus at the observatory, I turned around the there it was; the Hollywood sign in all its glory...except it seemed very far away and at a bit of an angle. We took the required several hundred pictures and carried on into the observatory. 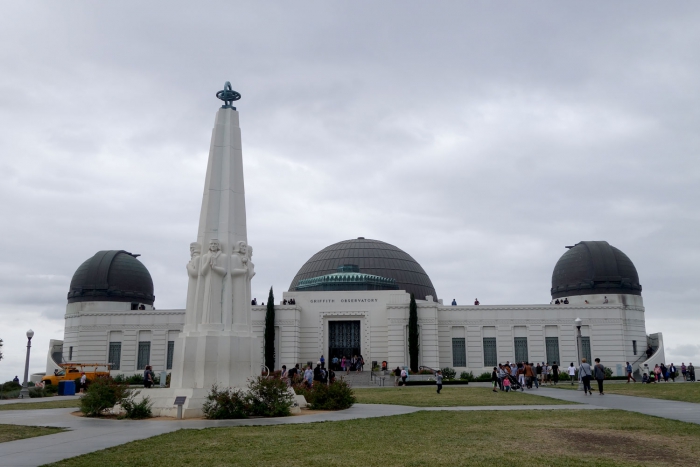 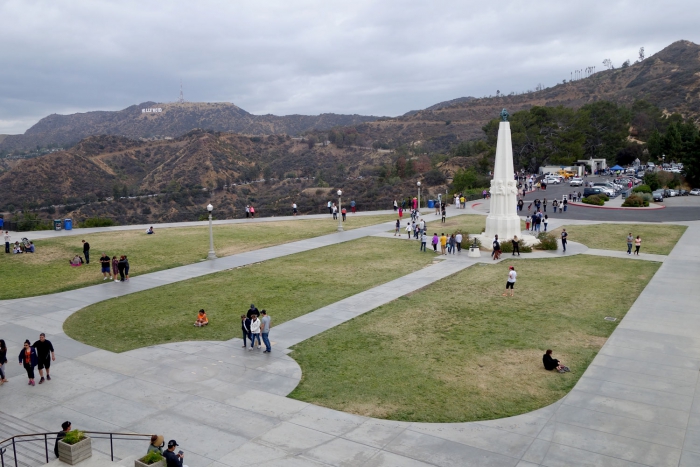 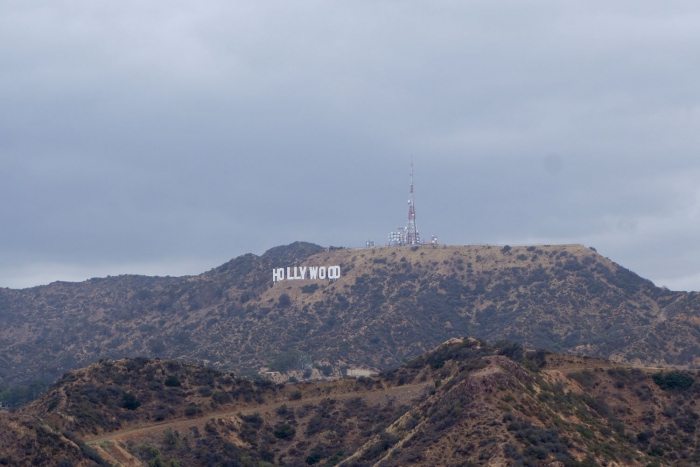 You really need a better zoom than my compact

Funny story however is that in the evening we were walking back to our accommodation which was just off Hollywood Boulevard and whilst standing at a crosswalk on the corner of our street I looked up and bam, the sign was right there all along!

You can also get a really good photo of it from the Dolby Theatre on Hollywood Boulevard if you go up their escalators to a bit of a viewing platform. 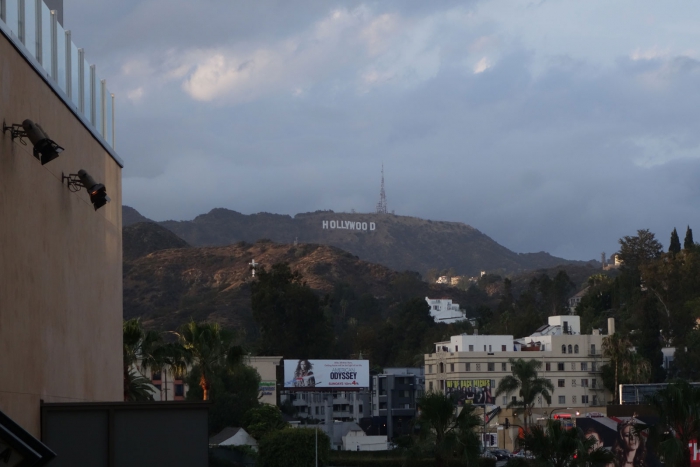 View from the Dolby Theatre

Griffith observatory was quite cool in itself, I reckon it would be a great place to take kids. Out of all the museums, science centres etc that we have been to, I think this one had the best displays and interactive bits! You can actually learn quite a lot.

We couldn't come to Los Angeles and not do a film studios tour so we decided on Warner Bros as it is one of the most well known studios and they do tape a lot of things that we have heard of! 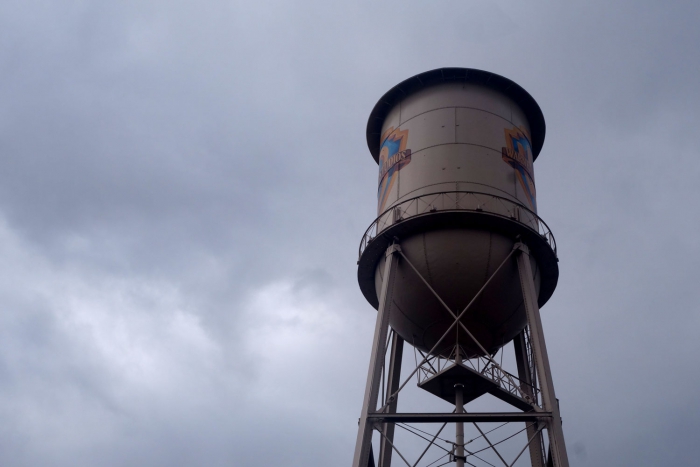 The tour itself is a couple of hours long and there are 12 people in each group (this is the VIP tour, their basic option). You drive around the studios in a buggy with your own tour guide who follows some set paths but also tries to accommodate the interests of the group as well. 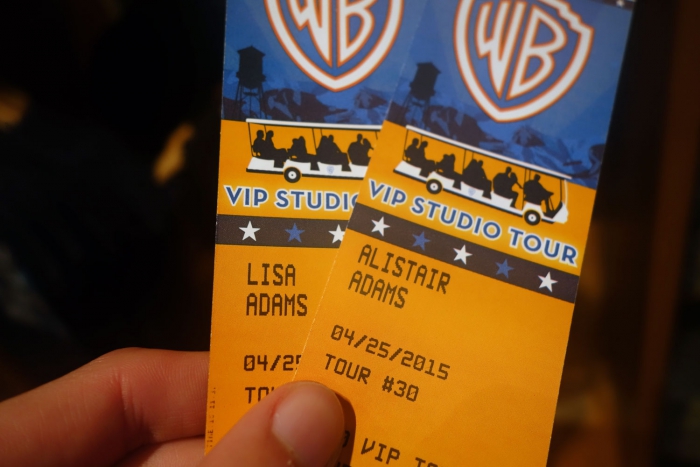 We drove into a jungle where Jurassic Park, The Last Samurai and parts of True Blood were filmed. 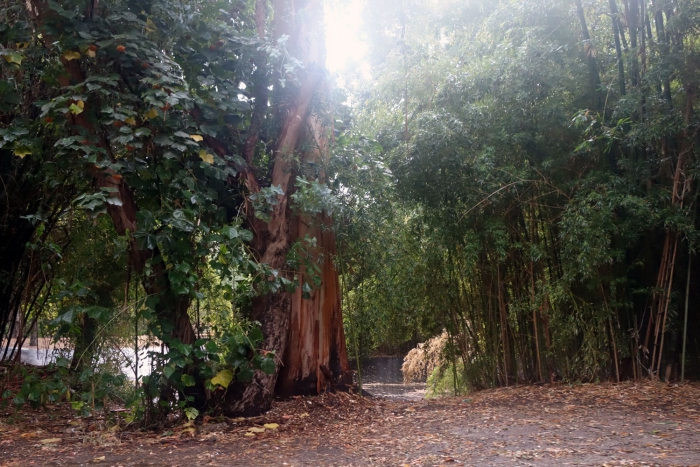 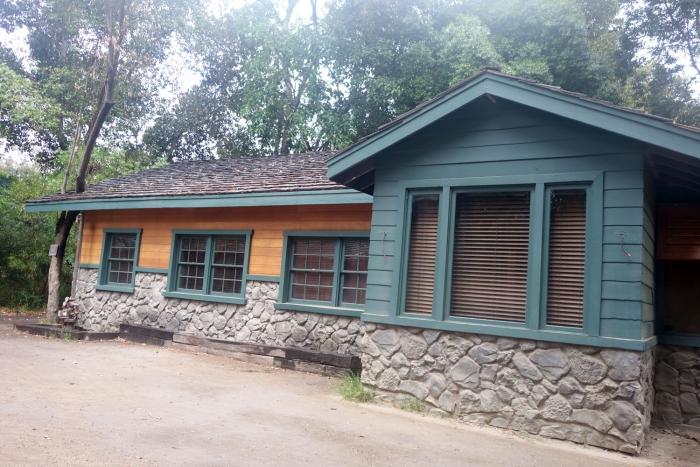 Merlots bar for those of you who know the show!

We also went past the outside of some of the Pretty Little Liar's houses.

What surprised us most was that they use almost everywhere for filming. There are bus stops in the studios but no bus that goes around the lot. They don't have any logos or names on the buildings so that they can turn offices into the outside of motels or airports or even hospitals! 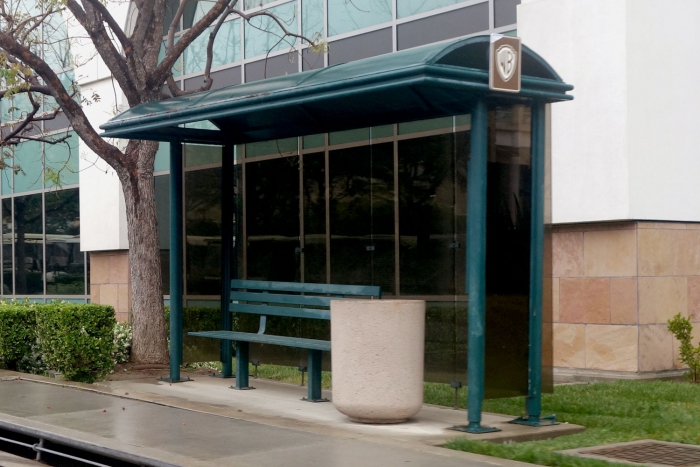 Lots of bus stops... no buses

Then we went into their museum where they currently have a display for Batman's 75th birthday as well as Harry Potter film memorabilia. The Batman stuff was pretty sweet, seeing the costumes and props up close! 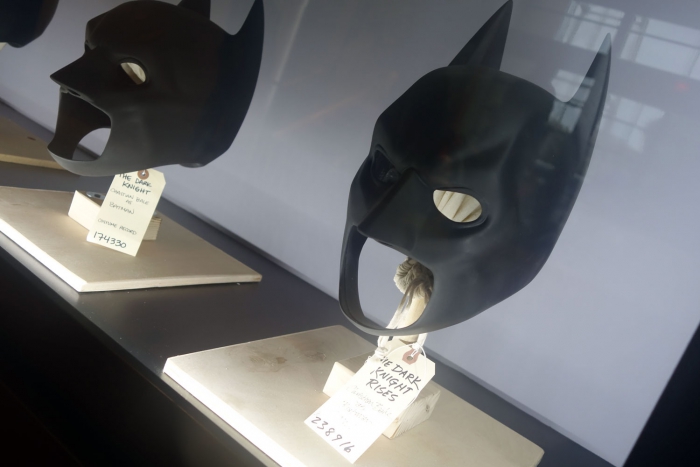 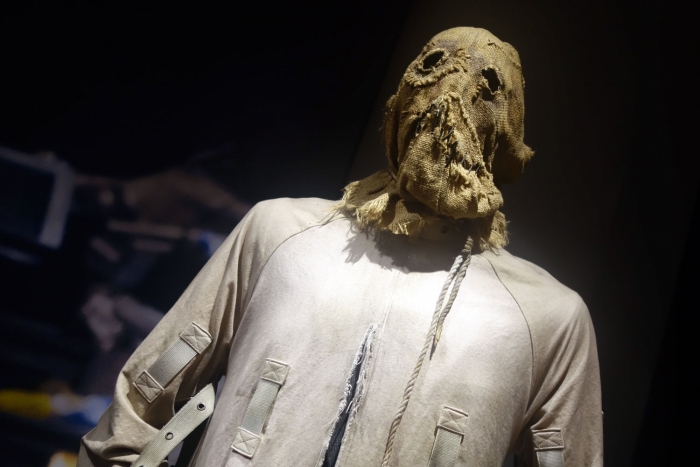 I enjoyed the Harry Potter exhibition (even getting sorted into Gryffindor!) but I can't help but think the UK Warner Bros is better for this given that it was all filmed in the UK. 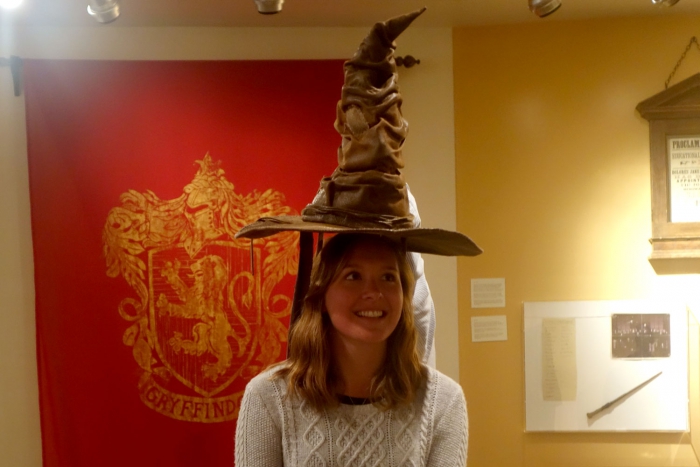 Then we went to see one of the sound stages that had all of the batmobiles set up in it as well as the spotlight and big creepy batman statue from the recent films. 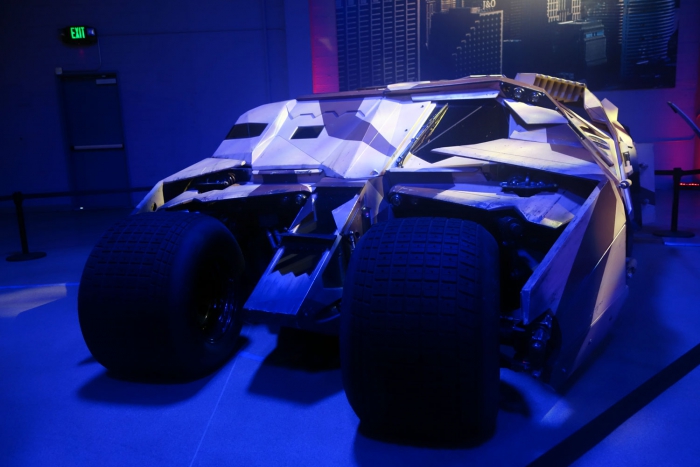 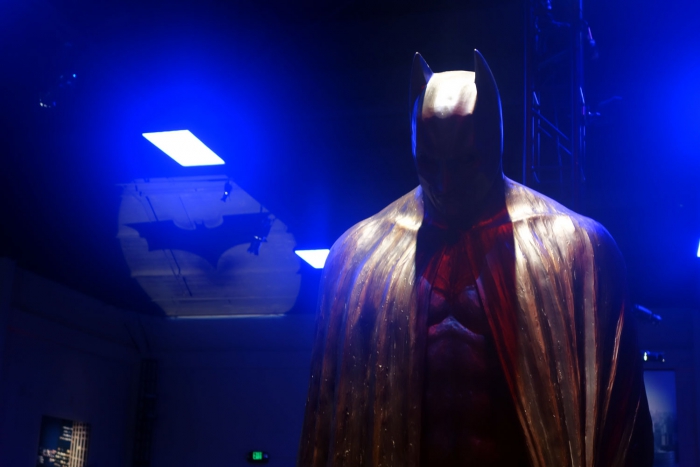 Finally came my favourite bit....they took us into the set for Central Perk! I am a massive Friends fan and was so incredibly excited to actually walk into Central Perk in real life and sit on the couch. They have kept it exactly the same way as the last ever episode apparently which is quite cool and it looks just like it does in the show except it is much smaller than you would expect. 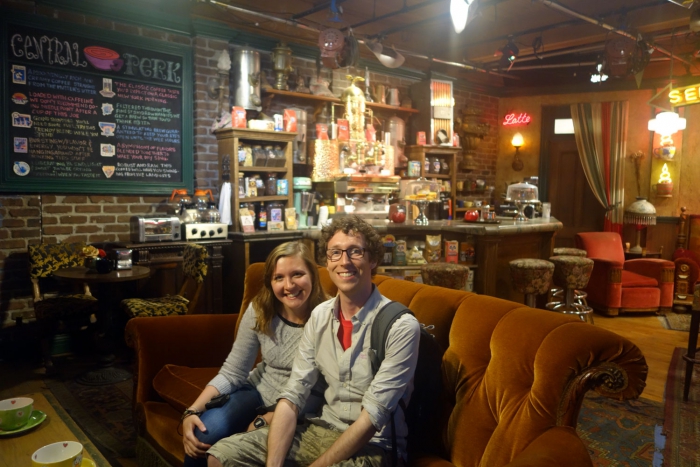 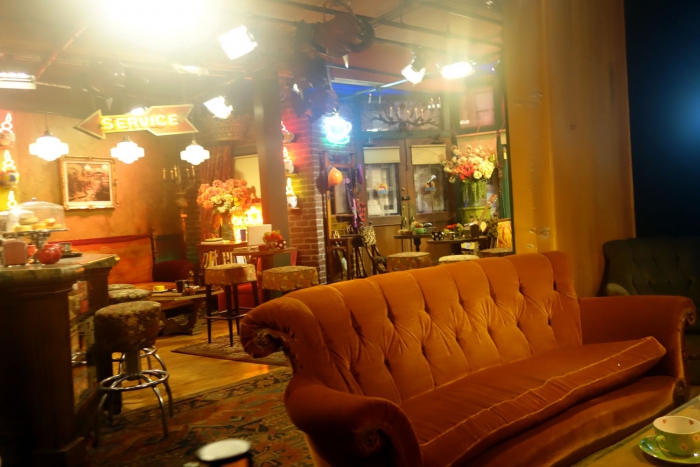 Still reeling from that it was time to go into a couple of sound stages. As we visited on a Saturday we pretty much had the run of the studios as no filming was taking place. The guide asked if there was anything in particular we wanted to see and so this resulted in us being taken to a Pretty Little Liars sound stage, the Ellen set and The Big Bang Theory set! We were both most excited about the Big Bang Theory as we had wanted to get tickets for a filming but sadly the season finale was filmed about a week before we arrived so seeing the set was a great second best. I would highly recommend this for anyone coming to LA, it was completely worth it!

Hollywood Boulevard and the Chinese Theatre

This is the classic tourist activity but you cannot visit Los Angeles without a trip along Hollywood Boulevard and popping into the Chinese Theatre. We were lucky that our accommodation (a great cheap place we found on airbnb called "My Hollywood Space Rentals") was right off Hollywood Boulevard so anytime we went anywhere we would wander along and look at the stars. I must say that the best ones are up at the Dolby and Chinese theatres though. 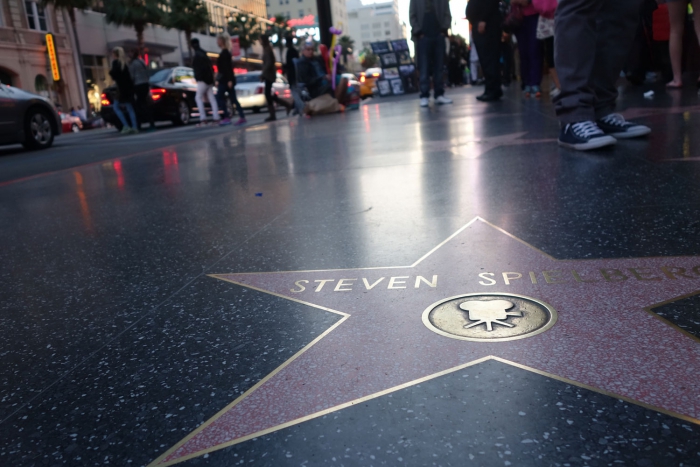 We were also walking one morning and walked past a star ceremony where Larry Elder was getting a star unveiled! So you never know what you are going to see. 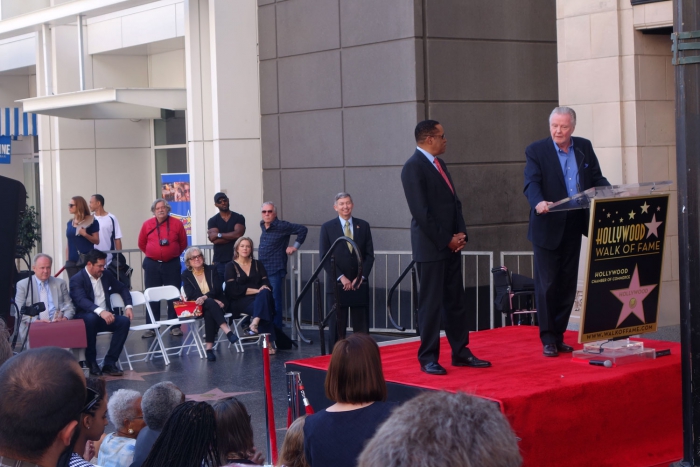 The Chinese theatre is the place where all the hand prints and writing are in the paving stones. We had fun just reading what everyone wrote, seeing how massive some people's hands were (Arnold Schwarzenegger) and taking the classic photos (Marilyn Monroe). 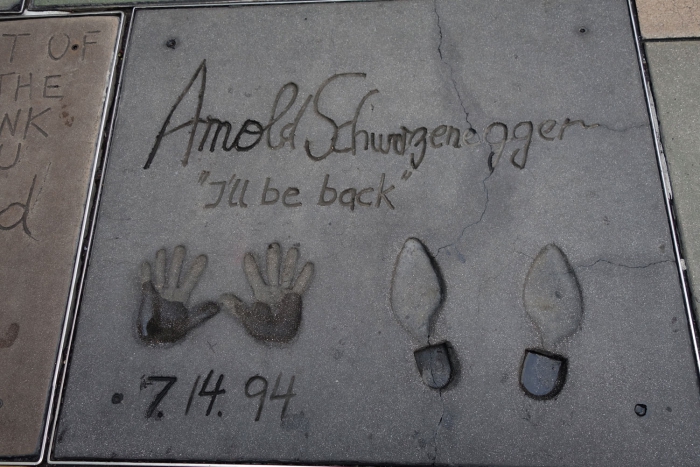 Taping of the Late Late Show with James Corden 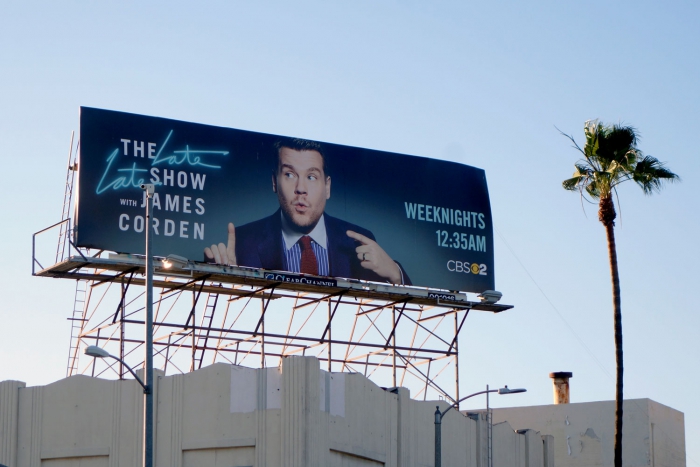 Again, something that we wanted to do in LA was to attend a TV show taping. Our pipe dream was to watch Big Bang Theory was as mentioned above that was impossible! So I applied to a few others including Ellen and the Late Late Show and we actually got priority tickets to the latter (the best websites are tvtickets.com and iota.com; the tickets are all free too which is awesome!). We saw Julie Chen, Gordon Ramsey and the Ting Tings from really comfy seats near the front and on the aisle the guests walk down. There was a little bit of hanging around but all in all we had a great afternoon and I would totally do it again, in fact I might try and see what we can see in New York!

We couldn't visit Los Angeles and not check out the beach. It is a bit of a trek to get there without a car (luckily for us only one bus but a very long one at that). It was absolutely bunged when we went but the highlights for me were:

On our last day we decided to see how the other half live. We took a trip to Beverley Hills and walked around a couple of streets checking out the big huge celebrity houses (we think we saw Simon Cowell and Tom Cruise's houses....well according to Google we did). 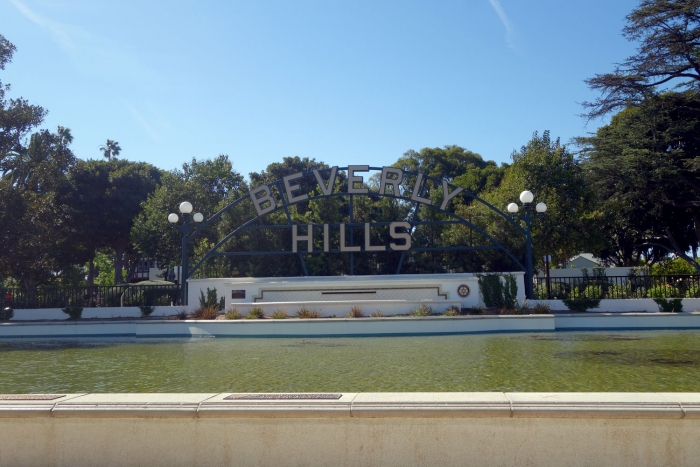 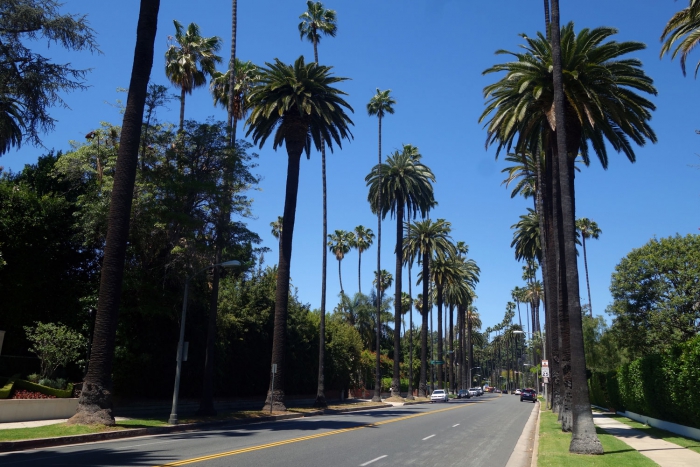 We also visited Rodeo Drive which is a really really nice shopping street, in fact the whole of Beverly Hills is a lovely area. Sadly we didn't spot any celebrities during our time (just a lot of blacked out, chauffeur driven cars) so we consoled ourselves with a cupcake from the famous Sprinkles bakery where the cupcake ATM was started, although the ATM was broken that day so we had to buy them inside...oh well they were really yummy anyway! 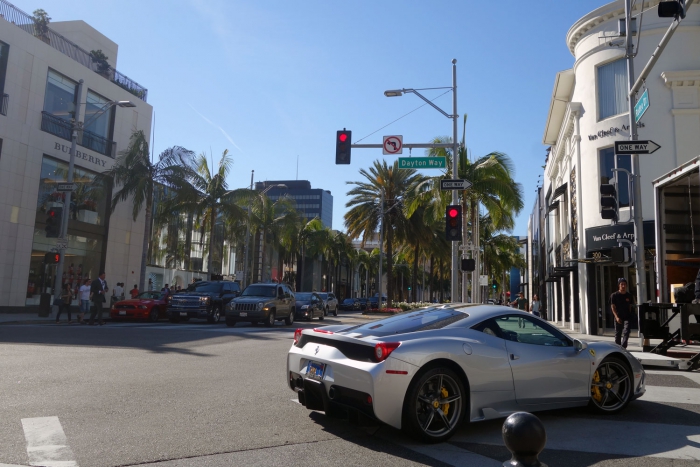 Getting around Los Angeles without a car

We relied on the metro system and buses to get us around the city. The fares are really cheap, $1.75 for one way or $7 for a day pass. What we noticed was that the buses can be fairly unreliable and last never came on time but the metro system was really clean and efficient although sadly it only serves a small portion of the city. I would say it is possible to do LA without a car if you have a wee bit of extra time and aren't afraid to walk a bit but it would definitely be quicker and easier to get around by car (except of course for the parking!).