Written by Lisa. Published on Friday, 15th May 2015
Our first stop in California, spending 4 days in San Francisco.

We travelled to San Fran from Seattle by 24 hour train and so were relatively shattered when we arrived. Google told us it was 25 minutes to our hostel so we decided to walk there leisurely and see if we could check in early. Little did we know that our route was taking us up over one of the hilliest parts of the city! Needless to say we both almost collapsed by the time we made it to the accommodation but thankfully we were able to get our room and chill out for a couple of hours.

In the afternoon we wandered to the Ferry Building which wasn't too far away. It now holds a market type area with lots of little food and produce shops. It's quite cute and a nice introduction to the piers along the San Fran coast. 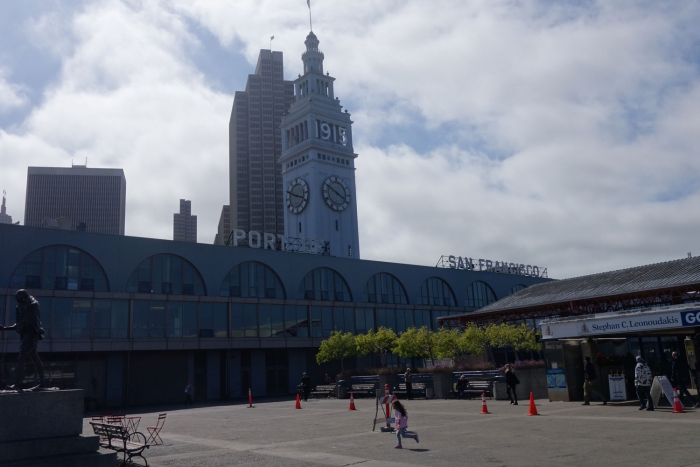 We ended the day by grabbing some food and heading back to the hostel to rest for tomorrow's big day; a tour of Google HQ!

We started off this day by travelling down to Mountain View to visit Google HQ for lunch; Alistair has written his own post all about our tech/start-up San Francisco experience so go check that out for more information.

After finishing up at Google, Charles (our contact and guide) mentioned that Stanford University wasn't too far away from where we were so we decided to take a nosy around before going back to the city. 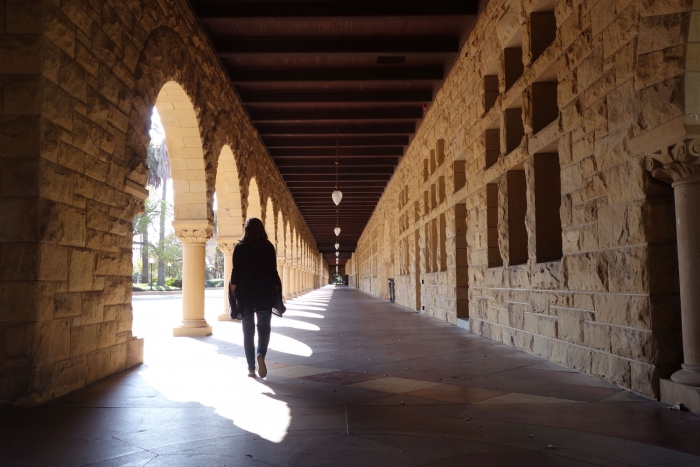 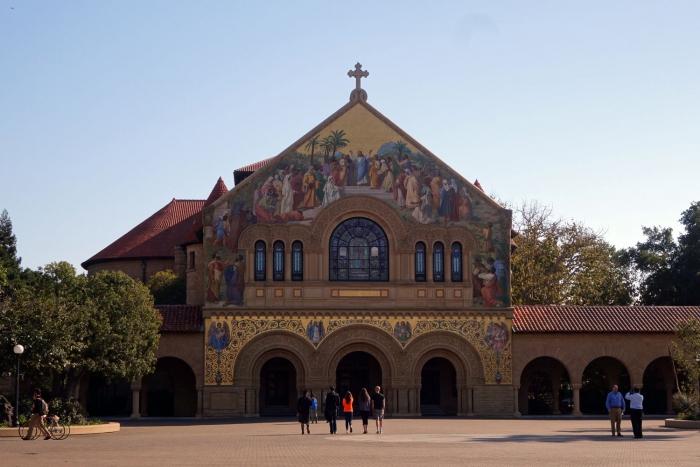 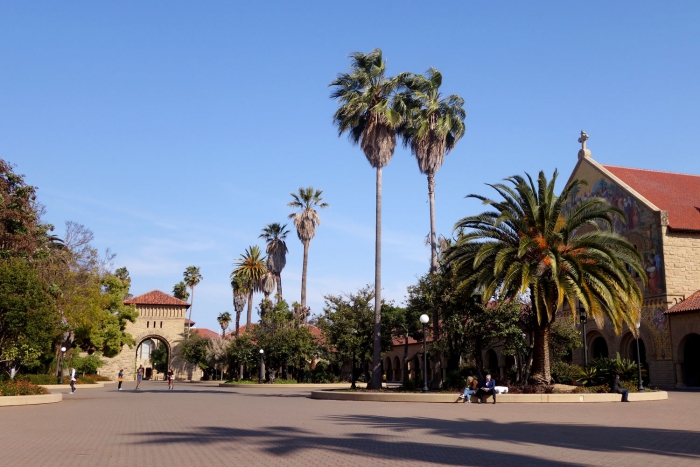 The campus is really pretty, the architecture feels very Mediterranean with lots of sandstone and archways. We were also quite excited to see some real life sorority and frat houses which are absolutely massive and super fancy looking from the outside! 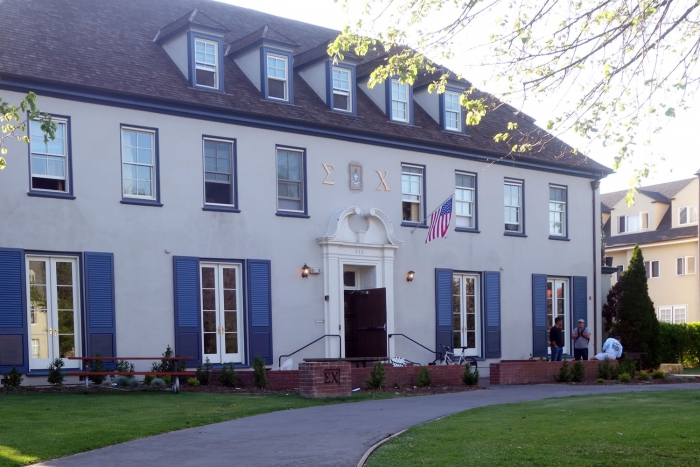 This day started with a trip to city hall. It's free to go in and have a look and there are tons of weddings going on so if you like a good aww moment then this is the place to go; lots of bride and grooms all loved up having pictures taken. 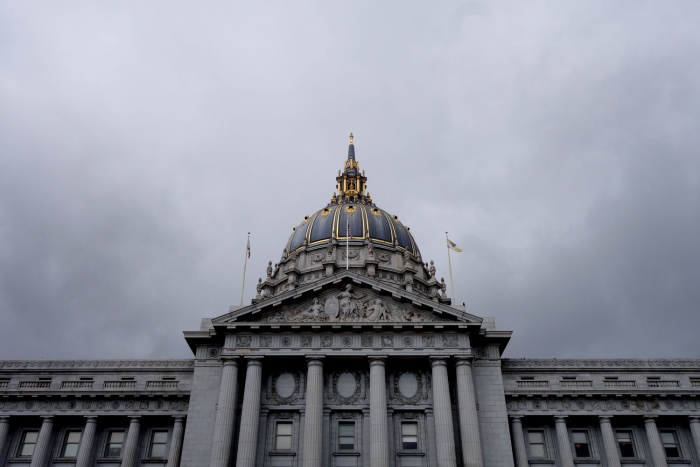 We had another exciting lunch at Twitter HQ which Alistair has also written about in his post.

After this we decided to be tourists and cycle across the Golden Gate Bridge. We had picked up a leaflet at our hostel which gave us bike rentals (with helmet and lock) for $18 each for 24 hours with Bay City Bike Rentals. We got geared up and headed forth. The cycle itself wasn't too challenging although there were a few steep parts (which Alistair just about managed and I caved and walked my bike up!) 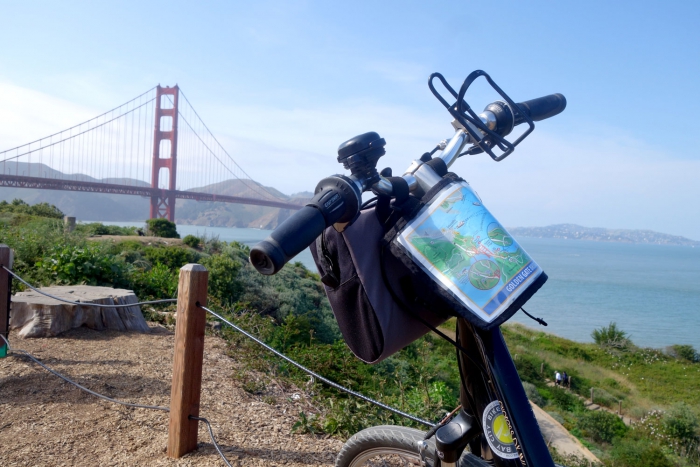 There are a few professional looking cyclists on the path and bridge so you just have to be sure to keep right and not get in their way as they speed past you! 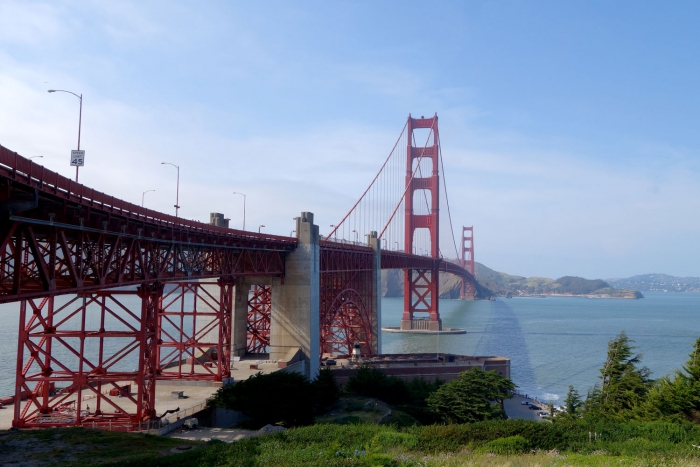 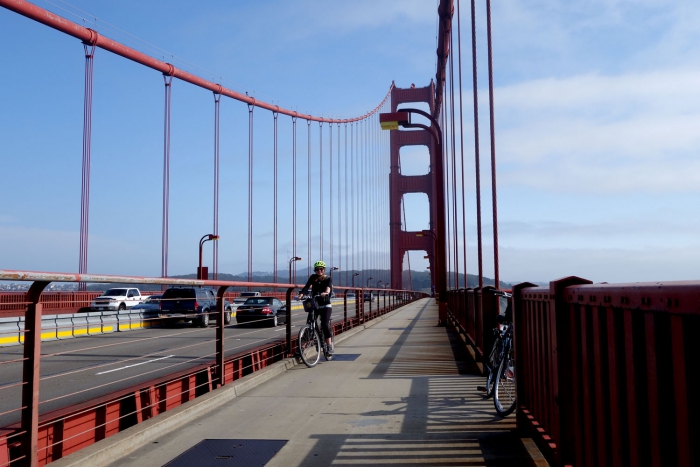 I found it quite cool to be on the bridge that you see so much on television and film. We made lots of stops to take pictures and the views were awesome. In the afternoon you have to cycle on the farther side of the bridge which gives you views of rugged coastline but in the morning you cycle on the other side where you would have views of San Fran and Alcatraz.

We decided to cycle all the way to Sauslito and get the ferry back. It's a cute little town which would have been good to have a little more time to explore but we needed to get one of the last ferries back to the city. It was a nice journey to pier 1, going past Alcatraz and getting some cool shots of the bridge silhouetted! 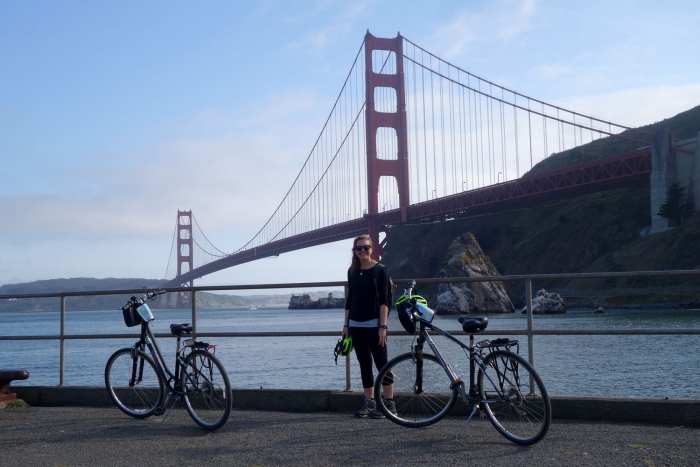 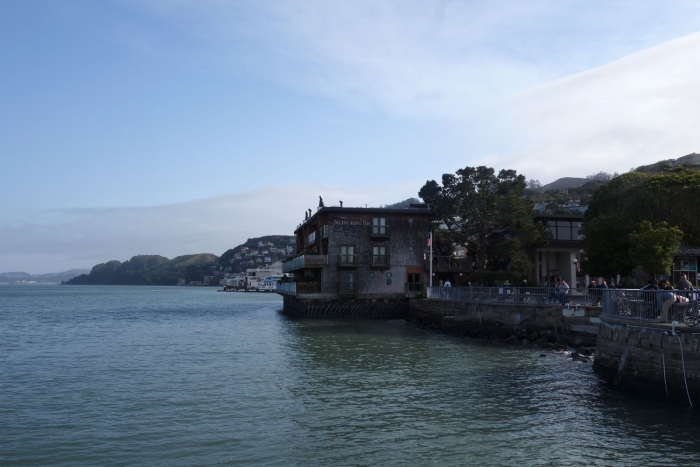 We cycled our bikes back to the shop (we could have had them til the next day but didn't want to risk leaving them outside our hostel). Our final stop was at Fisherman's Wharf where we had some clam chowder in sourdough bread bowls (a novelty that turned out to the pretty darn tasty and filling!). There are lots of options but we picked the furthest one on the strip called Fisherman's Grotto; it had a lovely herby taste to it and was creamy and thick. 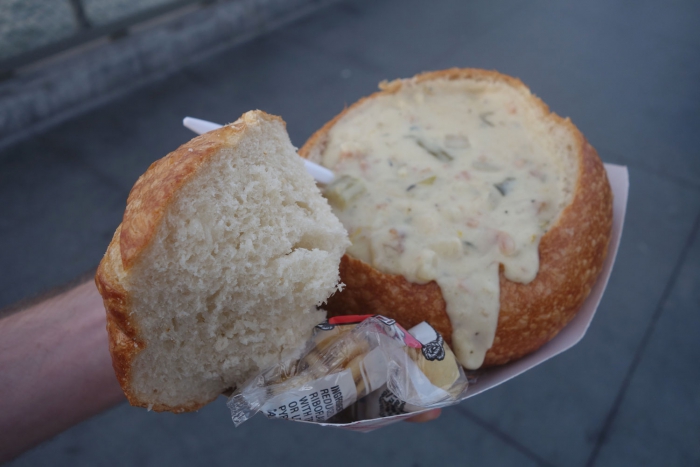 Then it was back to the hostel with one day left to explore the rest of San Fran.

A lot of walking

This was our final day in the city so we wanted to try to see everything else before our overnight bus to Los Angeles. 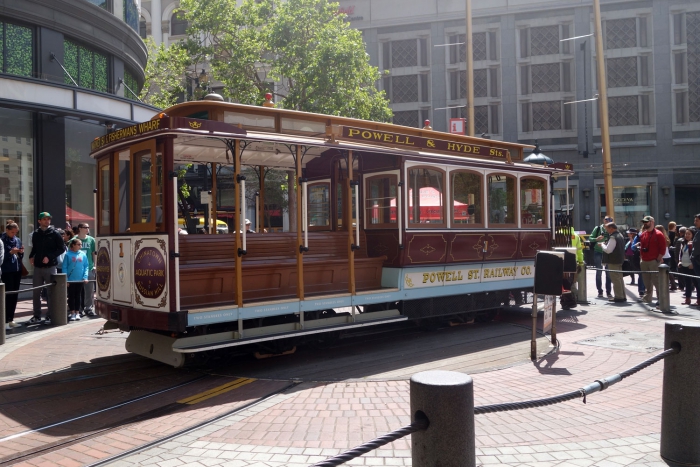 Here is a video if you want to skip the real life experience!

We then headed for the coast going past Lombard street en route. This is a steep street with a serious amount of switchbacks so makes for quite a good photo and I bet would be pretty fun to drive! 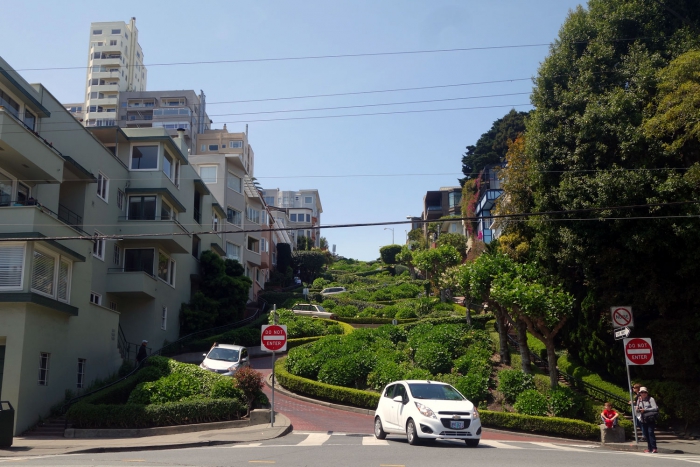 After this we visited Pier 39 which is a tourist guide recommendation. There are restaurants, cafes, shops and it has a nice atmosphere; we had our picnic lunch here! 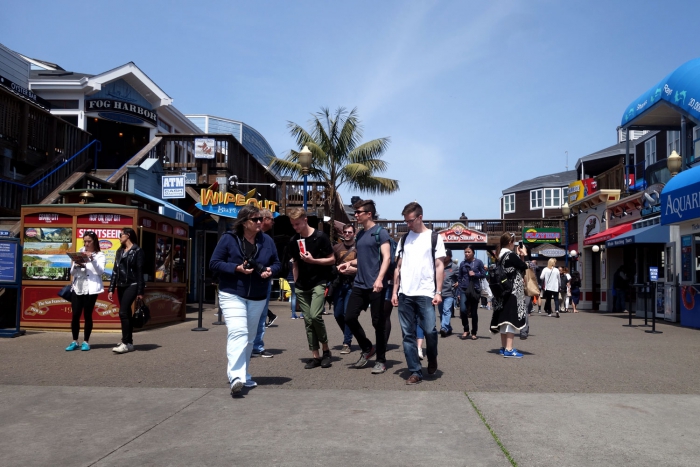 Our final stop was telegraph hill and Coit tower. After all the other hills we had walked up and down (pretty much if you want to go anywhere in San Fran you have to go up and down a hill), this one didn't seem so bad. It feels like a posher bit of the city with really nice houses and at the top there are some nice views of the city and Bay Area. 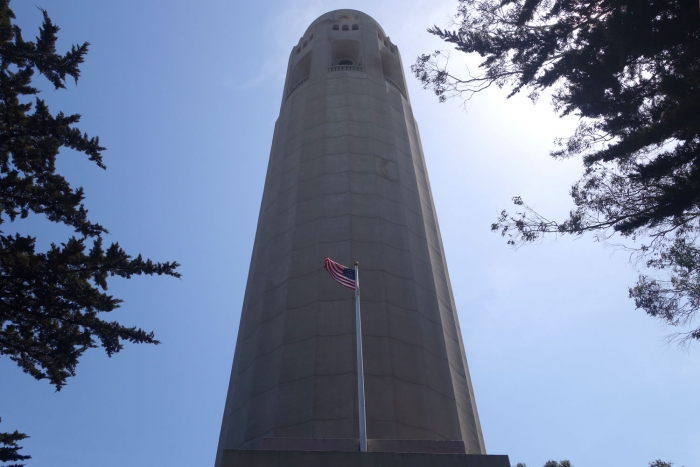 Then it was time to catch a bus and see what Los Angeles had to offer! 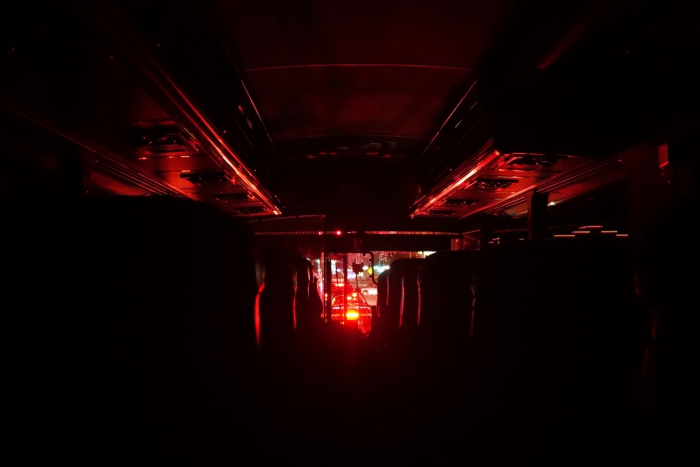 I really enjoyed the city, I was worried we would have too much time there but in fact it was just about perfect. I think Alistair enjoyed it a little more than I did given the visits to Twitter and Google and the fact that pretty much every sign was an advert about tech or software or development.

I would just note that we didn't find too many sketchy or unsafe areas (I expected a lot more I must say) but one bit that did feel a little rough was between Union Square and City Hall so take care when walking that way!