We weren't quite sure where we would actually end up on my birthday but with some forward projections we concluded about a week before that we would probably be in Dallas. We had a couple of activities that we wanted to do whilst we were in Texas so we decided to group them all together over three days in Dallas so that we could break from driving for a while and also so that I would have a pretty fun and a bit different birthday!

Getting pie in a real American diner

The first stop was a visit to a small, traditional American diner tucked away close to our hotel. We'd seen a lot of similarly styled 'diners' near tourist hubs in the big cities we'd visited, but really wanted to find a bit more of an authentic one. 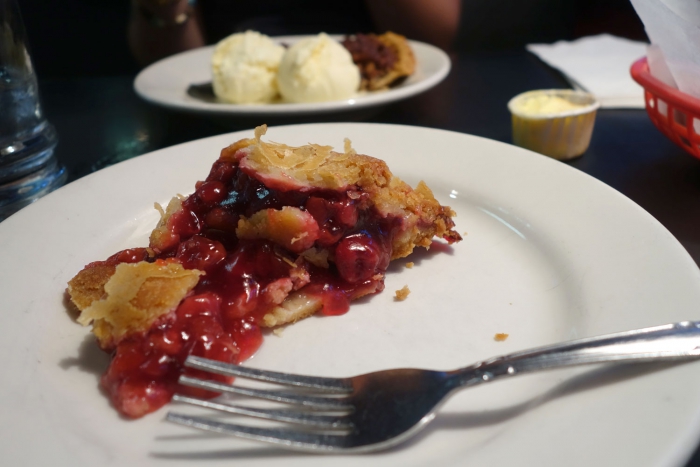 As soon as we stepped into the place we knew it was what we were looking for. We ordered a very yummy dinner and finished it off with a slice of cherry pie and a slice of pecan pie, completing step one of the American birthday experience!

Drive in cinemas feel like a very American institution, we don't really have them at home whereas they seem to be scattered across the whole US (although they are definitely dying out now which is a shame). Happily we realised there was one outside of Dallas; Galaxy Drive In Movie Theatre. They have 6 screens so on the night of my birthday we chose the combination of Tomorrowland with The Avengers (which we were happy to see again!) we were also pleasantly surprised with the price: $7 each to be able to watch 2 movies! 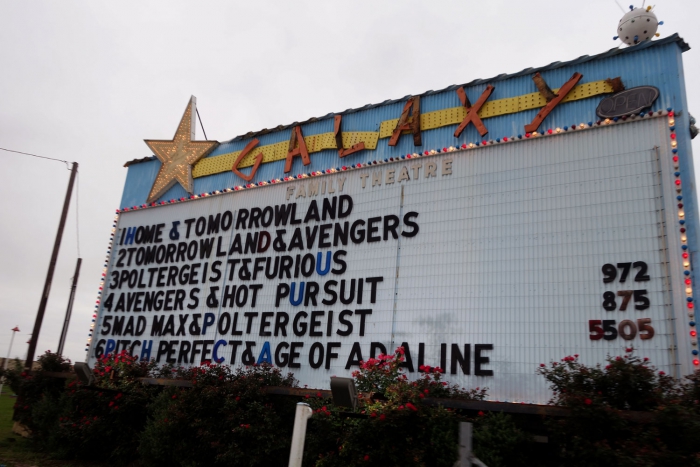 As it was a Thursday night it wasn't very busy so we had our pick of spots. You can tune your radio to the frequency they have beside the screen (although we had a minor issue of the car cutting off every hour or so, probably in case we weren't actually in the car to save the battery) or you can use the old fashioned window radios that they still have (but at our spot it wasn't working :(... ) 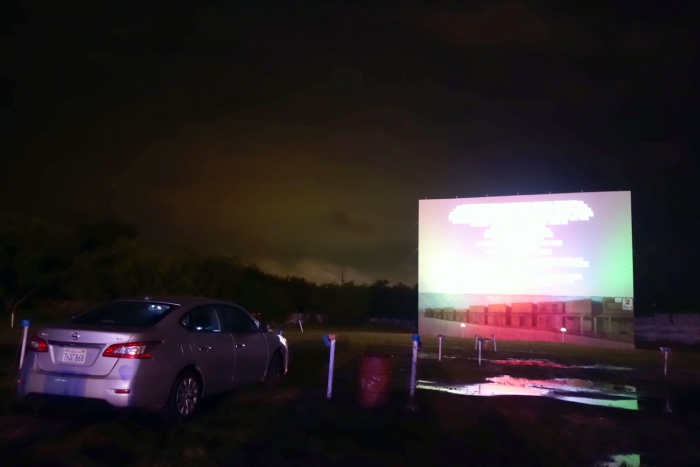 We got dinner from the concession stand (burgers, pizza and hotdogs) as well as bringing a mountain of birthday cake so it was a pretty great evening! 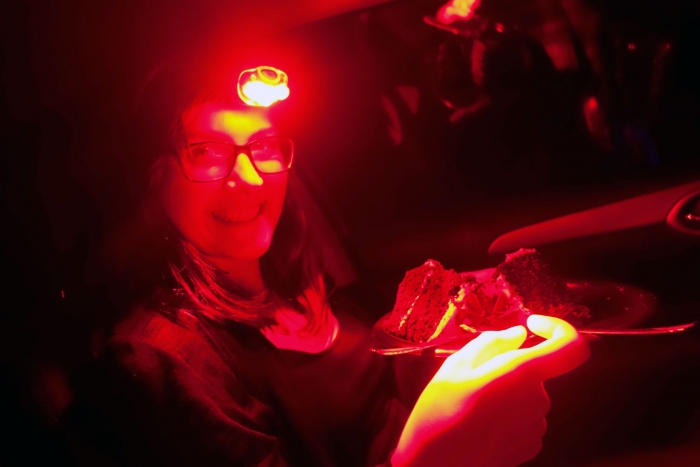 It got to about 1am and we decided that, facing a 40 minute drive home we should leave before we fell asleep despite the fact we still had a good bit of The Avengers to go...I know, we are such old people... 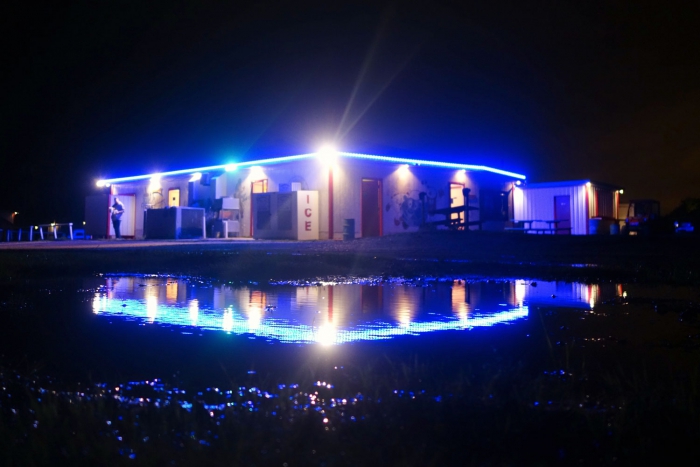 I think Texas is quite famous for its slightly more lax gun laws so we figured we would take advantage of this and do an activity that we definitely could not do back home - go to a shooting range.

We figured we needed to do some form of beginners course, rather than just pitching up to a range and hoping for the best but we wanted to be able to try a selection of different guns. We had a hunt around and finally settled on a deal we found on Groupon for Frisco Gun Club. This club had good reviews, the course involved using 15 guns and we wouldn't have to pay anything more for ammunition or ranges fees. 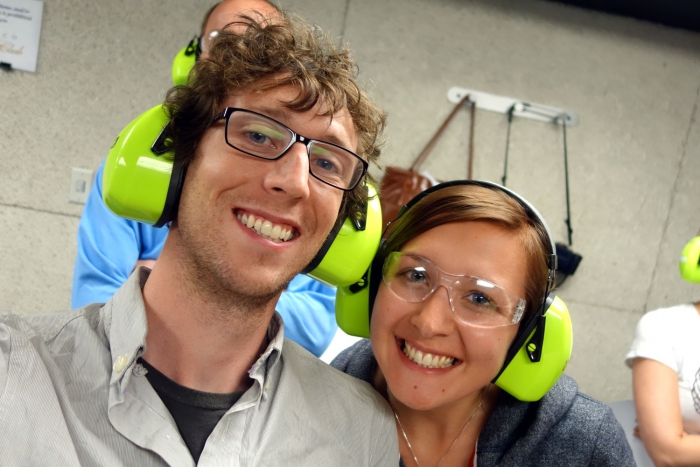 The course itself was split into two halves; The first was spent in a classroom learning the basics about handguns, ammunition and the law in Texas (turns out you don't even need a license to buy a gun or have it in your car, home or place of business in Texas!) The second half was spent on the range. They had four lanes which the 16 of us rotated around and practised shooting 12 different revolvers and pistols for 5 rounds each. Then they gave us each a personal target which we took with us across three lanes and shot three types of .45 handguns. 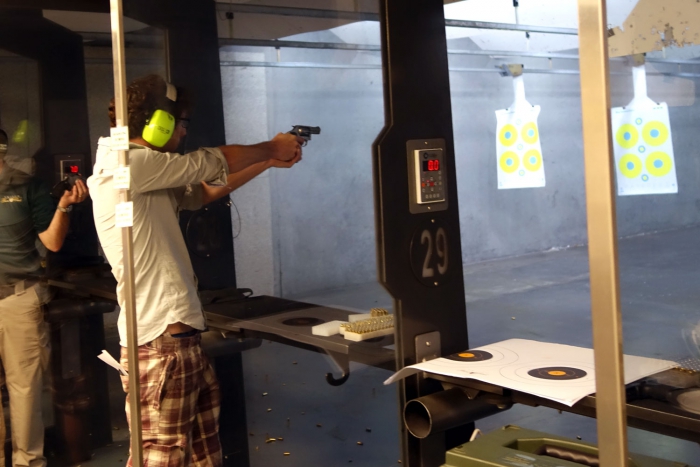 Turns out that I totally rocked when it came to the personal targets, which was a complete shock given that I have never held a gun before and absolutely suck at first person shooter games. What a fantastic end to the class! 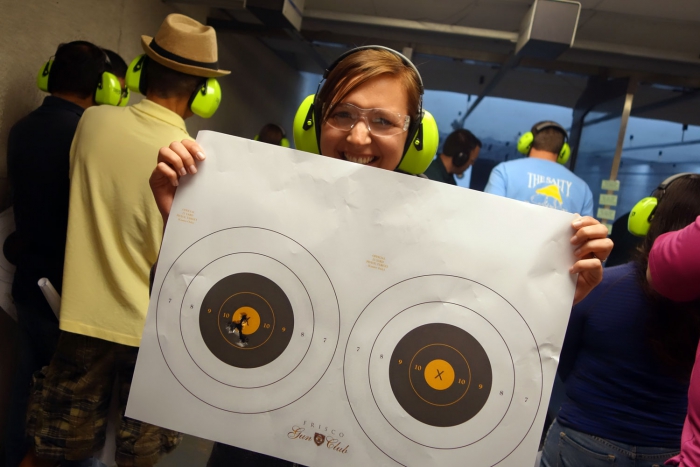 The one thing I will say is that it was a very strange feeling to shoot a real gun. TV and films seem to make them more accessible and almost toy-like but in reality they are heavy, really kick into your hand when they fire and you can feel the heat of the explosion when you pull the trigger! I actually didn't really enjoy shooting the bigger caliber guns because of the massive recoil, if I'm honest it scared me a little. The course has definitely made me see how dangerous guns can be and also how lax some of the gun laws are in the U.S., makes me appreciate home more.

Rodeo at Fort Worth

Something else that we really wanted to do in Texas was watch a rodeo. We were disappointed to find we weren't around for any of the big rodeo festivals but Fort Worth actually holds a rodeo every Friday and Saturday night so we were able to happily attend that. We both went into it completely not sure what to expect. The arena was indoors and reasonably sized and the crowd seemed a mix of locals and out of towners. 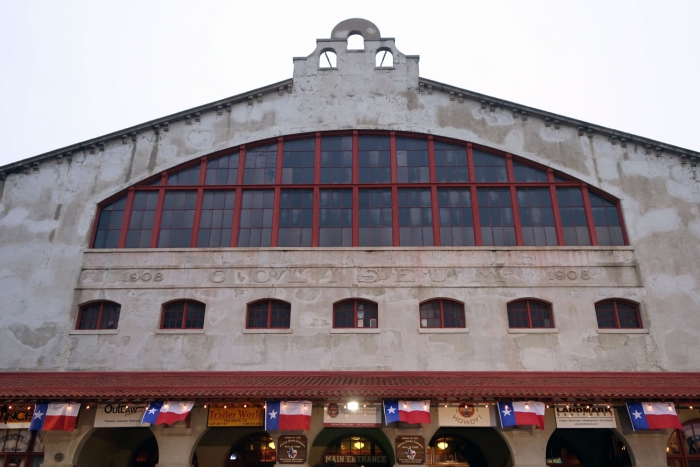 Before things got going, everyone took a moment to get a little patriotic with the National Anthem followed by "God Bless the USA" with a poor cowgirl riding round in circles for about 5 minutes:

(Sorry about the volume on these videos - maybe check your volume before you click play!)

Things started off with a little bit of bull riding which was rather exciting! We watched a couple of guys last only a couple of seconds each and then it moved on to the calf roping. This involved a calf being released and the cowboy having to lasso them cleanly around the neck then jumping off his horse and having to tip the calf and hogtie it. Some guys were really good at this and some sadly failed. The cowgirls who followed after only had to do the roping part but not the hogtying. 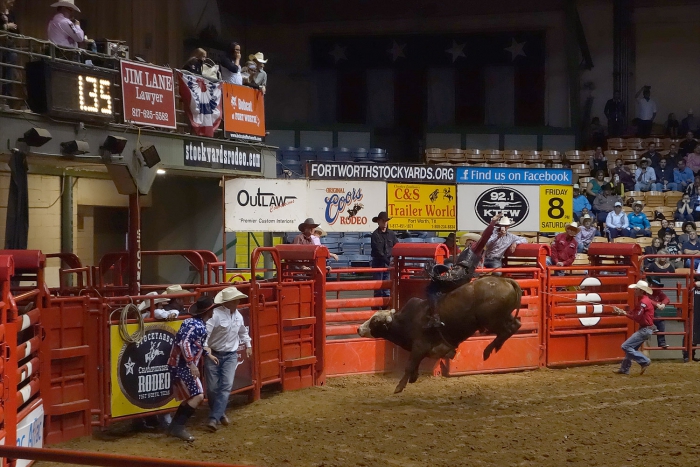 After a short intermission (and a fantastic pulled pork BBQ sandwich for us) it was back to watch the only team event; this involved one contestant having to lasso a calf around the top half and the second one to lasso its legs. When this was done right it looked very impressive!

The wrong way to do it:

The penultimate event was barrel racing. Three barrels were set up around the arena and cowgirls took turns in racing their horses around these in as quick a time as possible. Sometimes the horses were almost horizontal going around the barrels, I don't know how the girls stayed on.

We were then granted some more bull riding (and finally one guy who stayed on for 8 seconds!) then it was all over. It seemed to go so quickly and the atmosphere is great, the crowd did get really involved which made it more fun!

I forgot to mention that they also had two child audience participation events. The over 7 years olds had to catch a calf and pull some duct tape off its back, the under 7's had to do the same but to a sheep. This was hilarious and something I don't think would be allowed in the UK for all the health and safety issues around it which made it all the more brilliant.

Right beside the rodeo sits the largest honky tonk in Texas. We had wanted to check it out but there was a concert on that nigh which was really expensive so we thought we were going to have to hunt for another honky tonk to visit. We were given fantastic news at the rodeo however, we could get in for free with our rodeo ticket stub! So once the rodeo finished we headed over to see what it was all about. 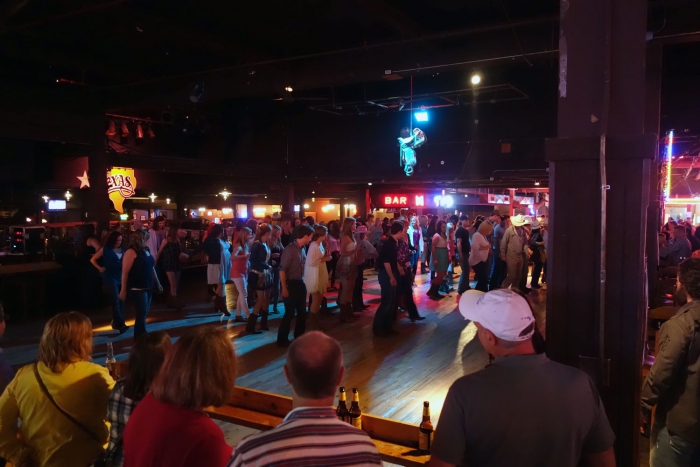 Something worth knowing, people know how to dance in Texas. This ain't like no club back home; Everyone on the dance floor is in pairs and doing the two-step (I think!) we were also treated to a very small bout of line dancing which made my day! 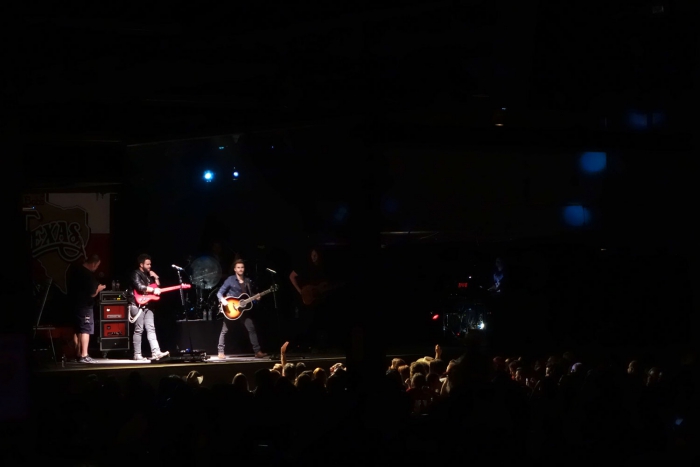 We listened to the live band for a while (the Swon Brothers who were really good) and then decided to try to brave the dance floor. After a little bit of studying, we figured we had it sorted and ventured forward. We didn't trip anyone up or seem to get in many people's way which I will totally call a win! Then it was time to head home and for the birthday fun to end.

I just wanted to quickly mention how much free stuff you can get in the U.S. for your birthday. I signed up to a bunch of birthday clubs and got sent free vouchers to use in the two weeks around my birthday! 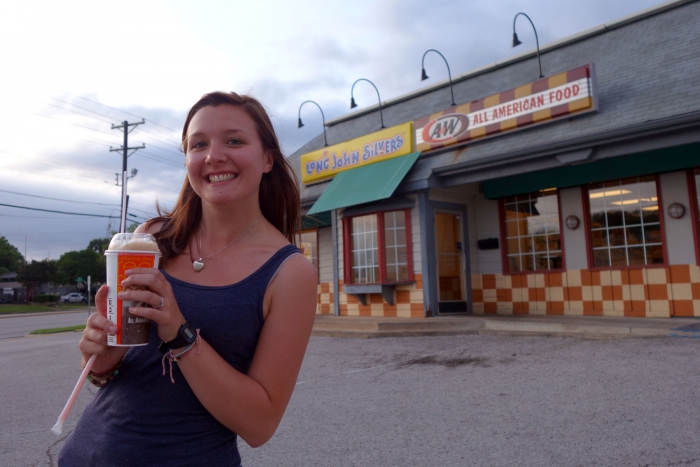 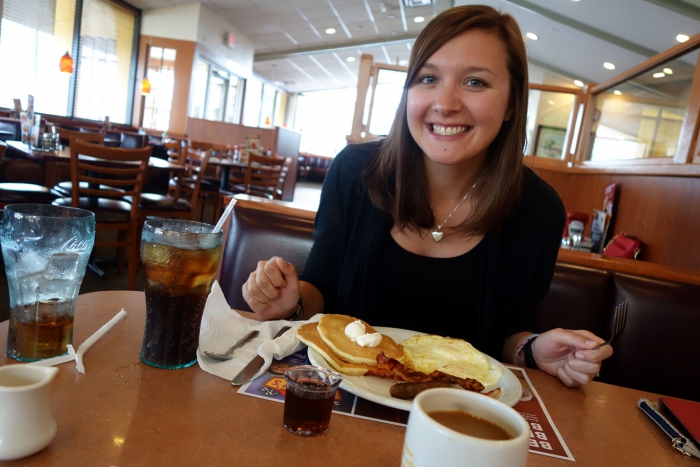