How to get from/to Ciampino Airport

Written by Lisa. Published on Wednesday, 10th August 2016
Getting the bus from Rome Ciampino Airport to the Termini bus station in the City and then back again.

We decided to fly with Ryanair from the UK to Rome which meant arriving into the Rome Ciampino airport.

Rome actually has two airports associated with it - Ciampino which is where the budget airlines tend to fly into, and Leonardo Da Vinci airport which is the international airport.

We did a little bit of research beforehand about how to get from Ciampino into the city and the main option seemed to be catching a bus.

We didn't want to book a specific bus in case we were delayed and so decided just to go with the flow and see if we could get on a bus on the day.

The airport is quite small and as you walk out of departures, the queues for the buses are literally just to the left of the entrance. I say 'queues' because there were several lanes with people starting to line up at them.

This was the confusing bit as we didn't quite know which one to join. Turns out there are several different companies running buses to the city (it isn't a public bus service) and they park at different lanes. We joined a queue initially for a Terravision bus which in the end was fully booked already with people who had ordered tickets online in advance. We then moved to the next line and asked one of the official looking people if this bus was fully booked and if it went to the Rome Termini station (which was where we wanted to go). All of the bus workers seemed to speak English which was very helpful and he informed us that the line we were in had spaces. It was a little bit of a wait (maybe around 30 minutes) for the next bus to turn up but we bought a ticket (which cost 4 euros each) and got on with no problems.

I think this was the safer way for us to do it rather than booking a ticket and then missing that specific bus due to delays with flights.

Going back to the airport

On the way home however, we decided to book a bus in advance. This was because we knew exactly what time we wanted to get a bus to make it to the airport in time. Also - we didn't want to run the risk of being unable to get on the bus we wanted because it was fully booked and then missing our flight. 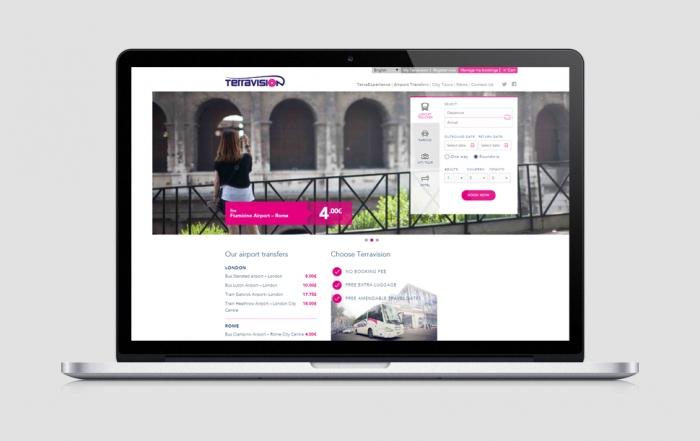 We booked with Terravision - their website was in English and was easy to use. The bus stop for going back to the airport is around the back of the Termini station and so took us a while to find. We needed to exchange our booking confirmation for passes to be able to get on the bus and this is done at their office which is quite close to the bus stop itself. When you get around to the back of the station, you can't miss all of the buses lined up outside!

There was no problem on this end either and we made it to the airport with no problems or hiccups! Hopefully the post is helpful for some of you - I wished someone had written about it before going myself so I figured I might as well write it for other people when I got back.