Written by Lisa. Published on Tuesday, 14th April 2015
Our first of many overnight Greyhound buses, this one was taking us from Banff to Vancouver.

When we were booking everything transport related before leaving the UK, the general consensus online seemed to be that in early April the roads would still be really bad in Canada with the chance of freak snowstorms etc and that novice winter drivers really shouldn't attempt to drive across the Rockies. This prompted us to decide to return our car in Banff and get an overnight bus instead to avoid any major catastrophes. Turns out this year the weather has been unseasonably good and we actually could have driven across with no both whatsoever but hey, we weren't to know before arriving!

So that is how we ended up boarding a bus in Banff at 9pm on a Tuesday evening. We had a little mishap with having managed to print the wrong tickets (ones for later in the trip) and only realising when we gave them to the bus driver meaning a very quick run back into the depo for Alistair and me hovering near the driver to make sure he didn't up and leave without us. Given we were the last people on the bus and it happened to be pretty much full, we had a rather squashed first hour at the back beside the toilet and a guy who looked rather annoyed that we had disturbed is pretty sweet back seat setup complete with pillow and everything! 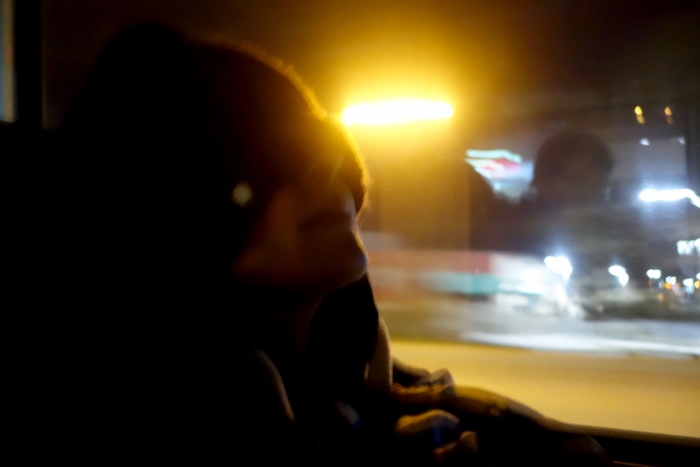 (Alistair:) Yeah... I didn't take a lot of photos on this bus journey... here is a semi creepy one of Lisa sleeping

Thankfully the bus stopped at Lake Louise an hour later and two people got off so we quickly jumped up and nabbed their seats. From then on it was actually an OK journey. The bus had leather seats which reclined, wifi and plug points. We both tried to get off to sleep at a normal time and were woken occasionally by the bus driver announcing we were approaching a stop.

Our one annoyance was that at about 3am the said bus driver told us that the bus needed to be serviced at the next stop for a new driver taking over and this meant we all had to get off the bus. This meant a disgruntled 20minute wait in a Greyhound depo in the middle of nowhere just when I was getting into a good sleep. After getting back on the bus I think I slept on and off reasonably well until our arrival into Vancouver at 8am.

It certainly wasn't as comfortable a sleep as we would have had in a bed but we saved ourselves an 11 hour chunk of a day to be able to do other things and the ride definitely wasn't as bad as I thought it would be so for that reason I'm not dissuaded quite yet from booking future overnight bus journeys when we hit the USA.