Written by Ali. Published on Tuesday, 12th May 2015
Our tips for how to take a tour around the Google and Twitter headquarters.

If you are anything like me, you can't fly halfway around the world to San Francisco. and not at least attempt to sneak a peek at some tech company headquarters.

Let's start with the bad news

The disappointing news is that these are real life companies with real life people trying to get some work done, sometimes on projects that they don't want to make public yet. Although we'd love them to be a little more outsider friendly, at the moment you can't just walk up to their reception and demand a tour.

So let's work out how to help you not join the ranks of these slightly too expectant people: 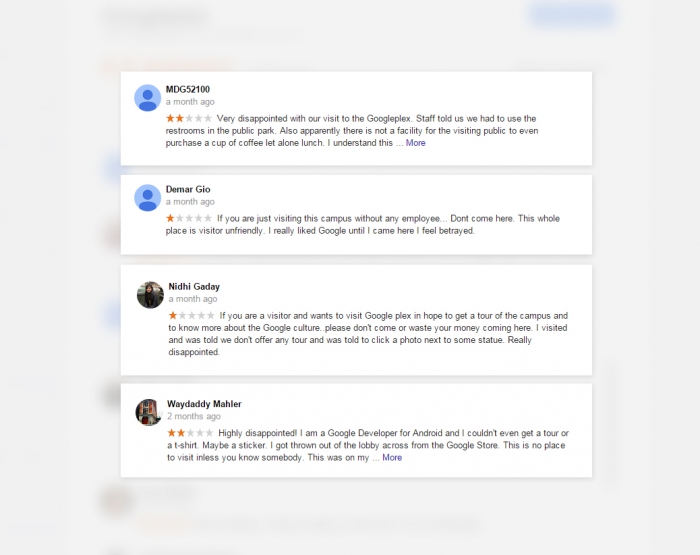 I was very fortunate to have some very kind friends of friends who took the time to give us a peek but if you aren't best friends with Eric Schmidt and co there is still hope.

Getting to Google Headquarters

The Googleplex in Mountain View is a pretty big trek out of San Francisco and I have to warn you that it might be a bit far for all you get to see - just over 1 hour 30 mins to get there. If you are still super keen though, you can get out using the Caltrain and a bus which comes to just under $20/person for the round trip. 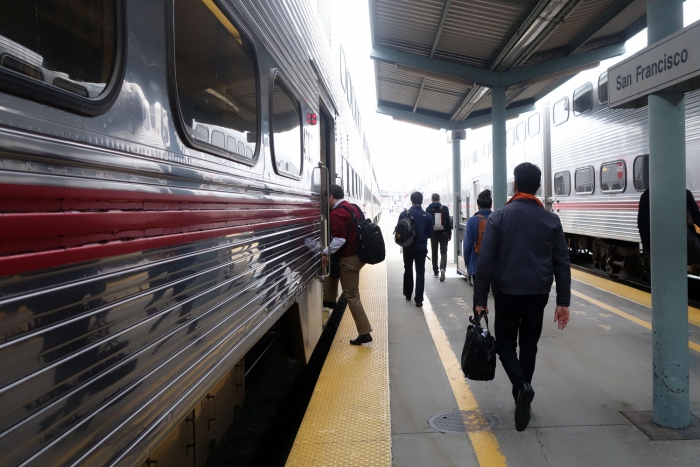 From there we walked to the 'California & Showers' (name of the cross streets) stop for the number 40 bus just outside Target which cost just $1 each (you need exact change). If you are feeling lazy, you can actually get another bus - the number 32 - from the Caltrain station to just around the corner from this stop.

You are wanting to go see the Google Headquarters though - you probably have already found this on Google maps!

One thing to note that we missed - there is a free community shuttle called 'Mountain View Community shuttle' which does a loop near to the San Antonio station - if you research that a bit, you might be able to jump on there instead!

What you can do at Google Headquarters

So, to repeat myself, don't appear at the reception of one of the buildings, demand a tour and expect to receive a warm welcome as many seem to have done with disappointing results. The headquarters is pretty much like a university campus - lots of casually dressed people walking around between a group of buildings - provided you don't stick out like a sore thumb, you should be able to blend in. You'll not be able to get into any of the buildings as these are a bit more secure, but there should be no trouble soaking in the atmosphere around lunch time.

There are two main clusters of buildings - Buildings 1900, 1950 and 2000 form a small group to the east, while the neighbouring main 'Googleplex' cluster is found around a volleyball court and green area, just to the west of Charleston park. The rest of the complex is spread out around these, but the other buildings are much more boring and isolated. 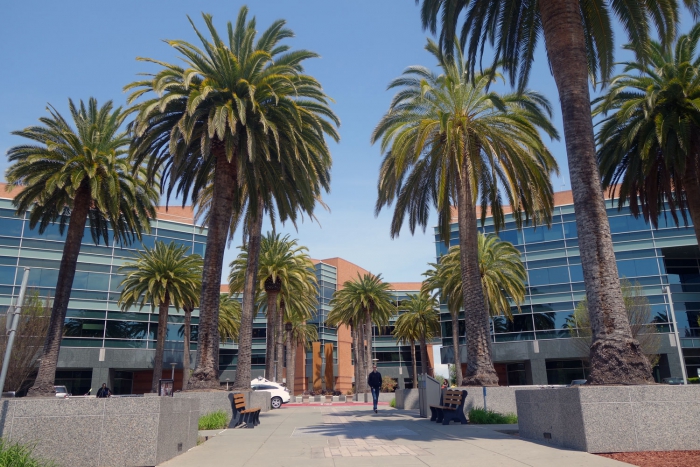 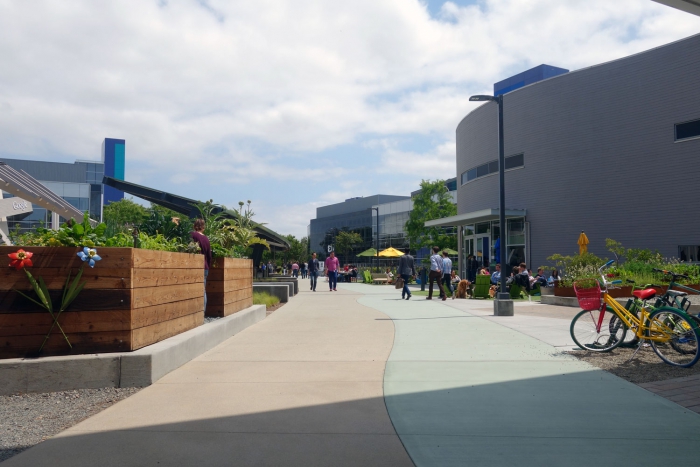 Now these are probably for Googlers (Googlees?) only but noone stopped us having a go; There are tonnes of brightly coloured Google bikes sitting everywhere - you can just jump on one to get across the campus a little quicker than walking (but much much more fun!). 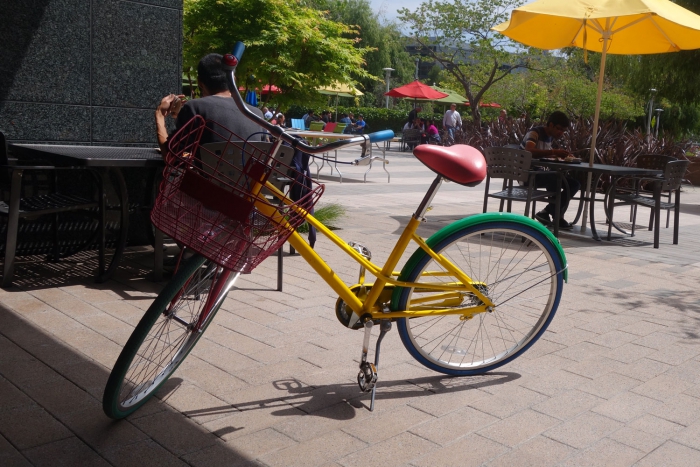 A little more bad news for this bit - you need to have been signed in by a Google employee to get into the shop. I have no clue as to why this is, but they seemed quite strict checking IDs at the door. 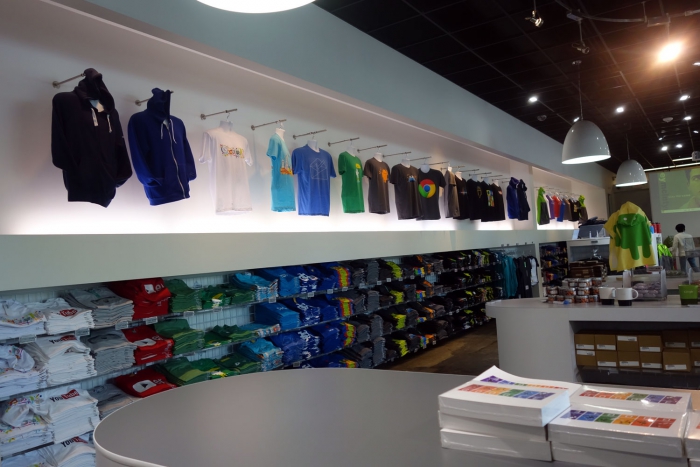 Touring the campus with a Google Employee

So if you have a Googler buddy they'll know where to take you and most of this post is moot. We met Charles, a friend of a friend of a friend, who was kind enough to take time out of his lunch break to show us strangers around. Even more exciting he hosted us for lunch!

Google's food offering is massive - there are different places to eat in almost all of the buildings as well as various snack stations scattered throughout the buildings. Apparently Google has taken a policy of using simper, healthier food options now - where in the past they apparently offered things like lobster, now it is simpler pastas, gnocchi and things like that - still an incredible variety; even the pickiest eater would find something there! 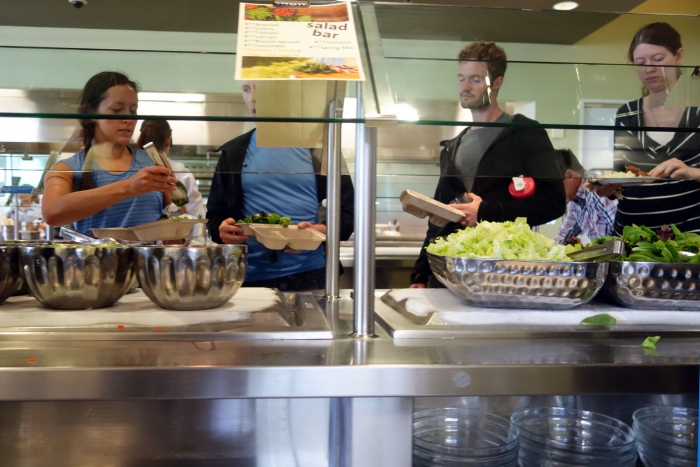 After food he took us on a tour around, again mainly the outsides of the buildings, but a few quick dukes through some of the buildings too. A really great and insightful tour - loved every second! We ended up in the store at the end which meant I got to buy a t-shirt (new favourite bit of clothing). All in all a great visit - thanks Charles! 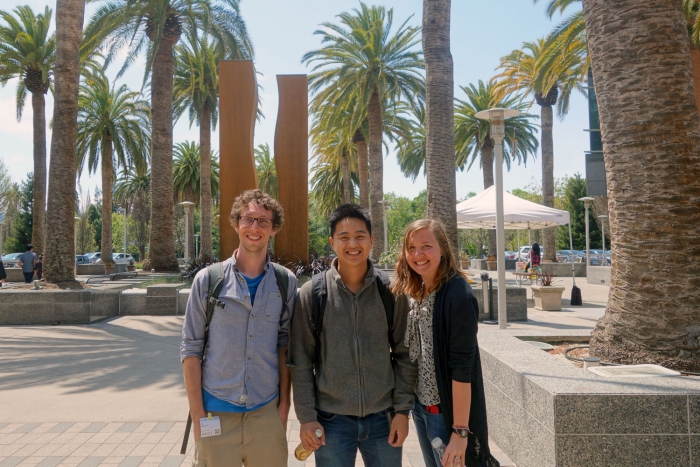 My top tips for touring Google without a Googler

Another company I was excited to see the inner workings of was Twitter. The office is much easier to get to, being on Market Street, one of the main thoroughfares in the city centre. 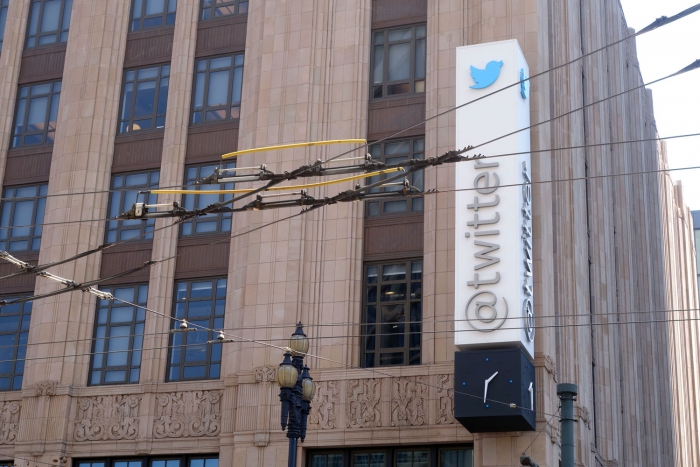 Twitter is a good bit stricter with their building security - we had to get a badge (which required an invite + photo IDs for both of us) to get up to Twitter's floor, then we needed another ID and guide to get into the main headquarters - so you won't be as lucky casually sneaking in here for a look around. I also was a bit more worried about taking photos in here so sorry for the lack of them.

The headquarters is a warren of levels, spanning a few floors in the building. The main atrium doubles as the main canteen and also acts as the main venue for Twitter's weekly company-wide meetings. We were meeting Josie for lunch and were only able to see the common areas - not the work areas - but there were certainly a lot of these to see!

We'd started in the canteen, grabbing some food (which was a much fancier affair than Google's offering, albeit maybe a little less healthy looking!), then wound our way through several areas and floors in order to find a place to sit and eat.

There are several main themed areas, from the main, functional, canteen to quieter corners and coffee-shop like areas. The aesthetic was much less colourful and more natural, with a lot of wood paneling and partitions. All in all a much more professional feeling place to work, although maybe missing a little of the creative colour and energy which Google's aesthetic seemed to conjour.

There are plenty of other awesome tech companies scattered about San Francisco city centre that you might also be interested in checking out - we did a bit of a rushed tour of them but if you spent a bit more time to research and plan your route, you could see quite a few.

It is worth noting though that a lot of companies we attempted to go and visit had quite nondescript facades with very little reference to the company contained within - Airbnb and Pinterest where two we couldn't see any associated logos outside etc. We were told there might be some building regulations in the city which prevented them having logos outside the building which may have been the cause of this. 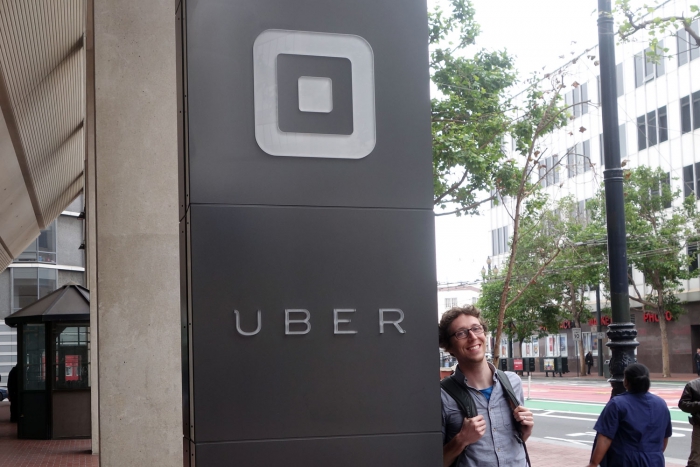 So if you are heading out to San Francisco and this blog hasn't put you off nosying around, good luck and have a great time! It can be pretty inspiring to see the 'real world' side of products and services we use every day.