Surviving a timeshare presentation in Vegas

Written by Ali. Published on Sunday, 24th May 2015
Trying to get freebies in Las Vegas by sitting through a Timeshare presentation.

I've gleaned enough from popular culture as to what to expect from a timeshare presentation; luring you in with freebies then pushing for the hard sell. It wasn't something I had realised was prolific in Vegas but on the second day of our trip we certainly found out.

First thing's first; Let me set the scene. We'd just successfully queued for and purchased our tickets for Mystere by Cirque du Soleil and had decided to walk down to the box office at Treasure Island to get our seats assigned.

It was Treasure Island where the trap was expertly dropped. A lovely person hands us a card with something like "Win a billion dollars" on it. It's not a strip club or escort service so sure, let's see what it says. I have no sooner held the card up to read it before a second person runs over and says "Oooo you have a magic ticket - let's see what you've won". Simultaneously disorientated and kind of impressed with the efficiency of this move, we find ourselves shaking hands with "Tracy" - a great guy who informs us of how everyone he talks to loves him and comes back all the time for tips and deals in Vegas. Lisa simply just has to enter her email address into this computer and ... "Woah!! You have won a Caribbean cruise!" ... awesome- ... "but sure you can't really do that if you are travelling - let me comp you some shows instead". By this time we were fairly sure we were being reeled in for something but I'm totally up for some free shows and a meal and so we waited for the 'but...'. What started as a "we just want to show you round a new resort for an hour and get your feedback about it" slowly morphed into the realisation he was attempting to sell us on a timeshare pitch. Once Lisa was also onboard with what that would entail, we decided that for a few hours of our time alongside Lisa's stubbornness and my innate allergy to sales people, we'd be able to survive without signing away our future lives. I kind of wanted to see what a 'real life' timeshare presentation would be like. So after pushing for a bit more - a free show, meal, dining credit, and $200 of play slot money - (I'm still kicking myself for not asking more) we signed in blood and were told to meet a bus in 30 minutes to take us to our demise. 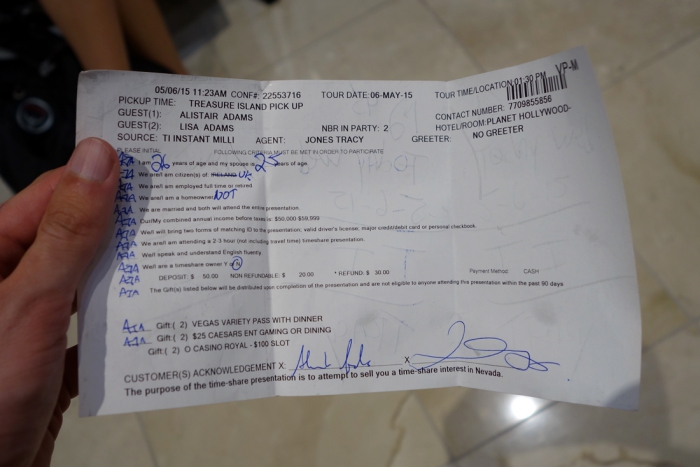 In a good way, I guess, the timeshare presentation was a little disappointing - I was intrigued by the various ways we were going to be tricked into believing that a timeshare was a good deal and how our sleazy sales guy was going to push hard to get us to put our money in his pocket. In the end though, the 'tricks' were just a bunch of bad maths presented first by a robotic sounding woman in a slideshow (while we shovelled down some sweet free food) followed by us chatting with what turned out to be an incredibly nice guy for an hour or so. I think we were fortunate (again) with the allocation of salesperson - not all the bored sales guys sitting at other desks with people looked as sunny. 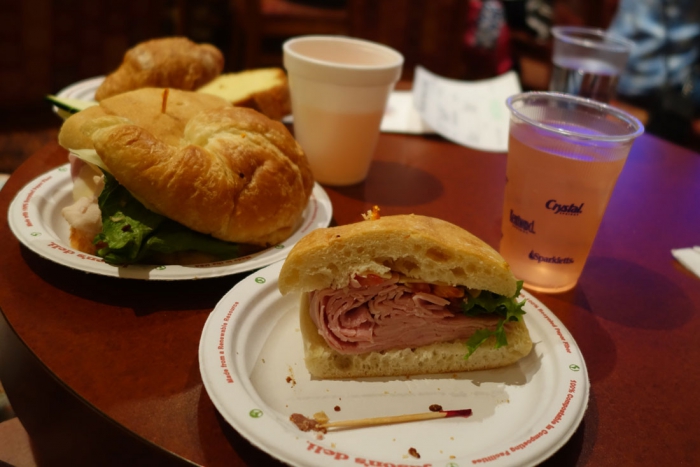 In the end, it was just a matter of us insisting that we weren't as sold on the numbers as he thought we should be and that, even if the wonderful picture he was painting were true ("Only pay $207 to stay anywhere in the world for a week"), the monetary commitment he was asking for wasn't a sensible one for us to make. In the end, he seemed very much on our side. We had to be 'vetted' by a senior sales manager to be released (which was a bit of a weird thing) but our new friend told us that we just needed to say we had no money today to put down - without any money down, there was nothing they would be able to do.

As a result, our final story which just shifted the truth a little was that we'd been travelling the world and the US for the past year and, now that money had run out (hint: we can't pay for the timeshare) we were heading home after spending our last few days in Vegas - thus us doing the timeshare presentation in order to get some free Vegas goodies. He seemed convinced and finally we were released.

I think we got a disproportionately pleasant timeshare presentation and I don't want this to be a recommendation to do one but we 'got out' and were happy with the result of trading our empty afternoon for a few free bits of fun in the city.

If you do manage to find yourself in one of these - again, let me repeat myself, don't say yes. No matter how good a deal it sounds, it very much rarely is.