An afternoon in Philadelphia

On our way between Washington and New York we realised we would be passing Philadelphia, one of the cities that played a large part in the formation of the United States so thought we should drop in on our way past to see if we could capture a small part of the city's history and feel

Our accommodation was in the Italian area of the city so when we arrived in the early afternoon, we dropped our stuff off and walked towards the old city through the Italian Market. There is loads of fresh fruit and vegetables on sale all the way up the road, and very well priced too (I bought some strawberrys for $1 the next day)! 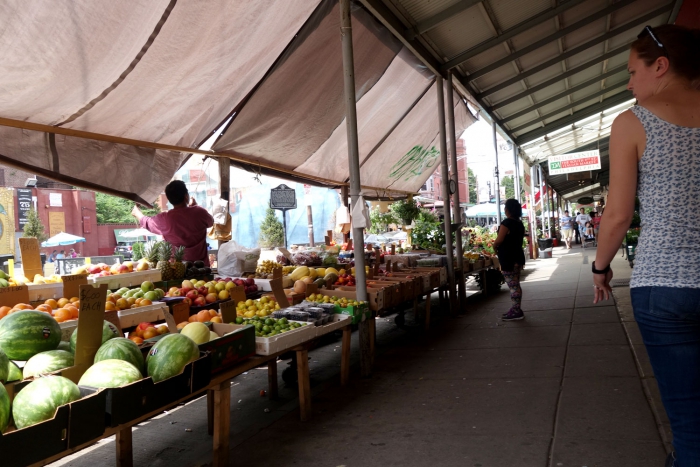 When we arrived at the historical district, we headed straight for the visitor centre to see if there were any (free) tickets left for the tour of Independence hall - the only way you can visit that building. Sadly as it was so late in the day they had all gone but our luck improved when we realised it was summer hours and so after 5pm, they let groups of people in without a ticket for a shortened tour. 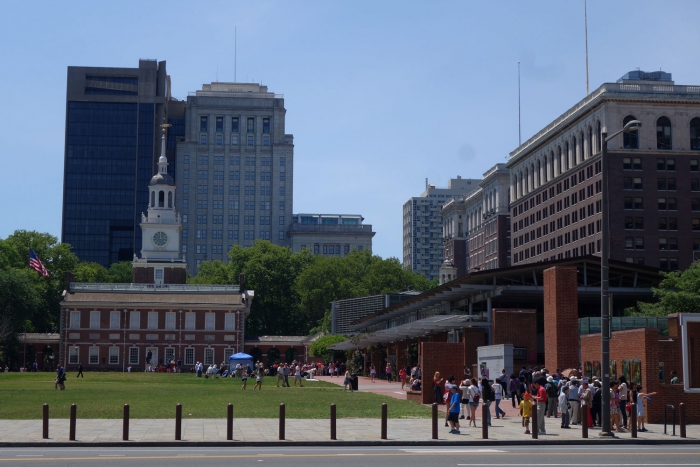 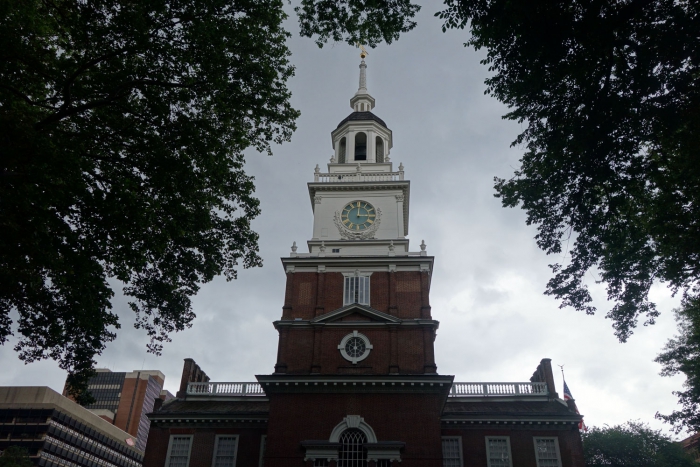 We wandered around the other buildings (which don't require a ticket) until closer to 5pm. We started with the Philosophical Hall which had an exhibition in it about Benjamin Franklin and his contribution to science along with other scientific and geological finds of that era. 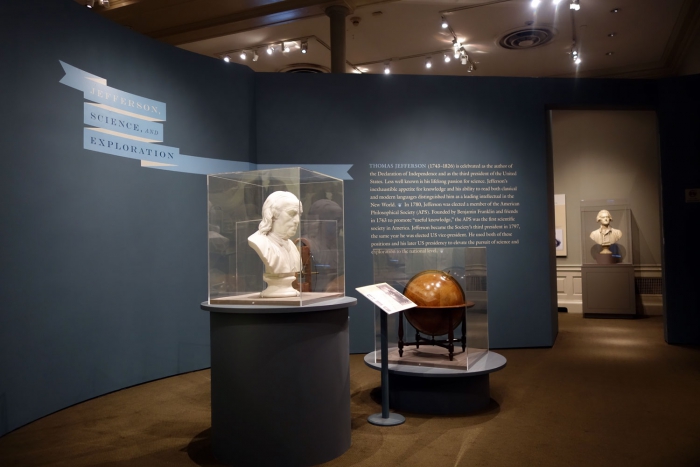 After this we crossed the square to the West Wing of independence hall to see the Great Essentials Exhibit, which turned out to be a small room which contained printed drafts of the Declaration of Independence with corrections made by George Washington. The draft that they have is apparently older than the one in Washington even though it is printed!

Our final stop in the square was Congress Hall. There are ranger led tours every half an hour or so and these are again free. We joined one and were given a history of the building and a tour of both floors which lasted around 30 minutes - I think it was the best building behind Independence Hall itself. 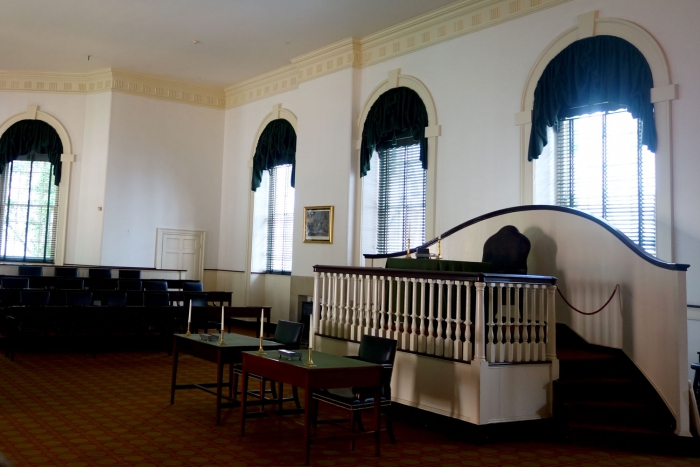 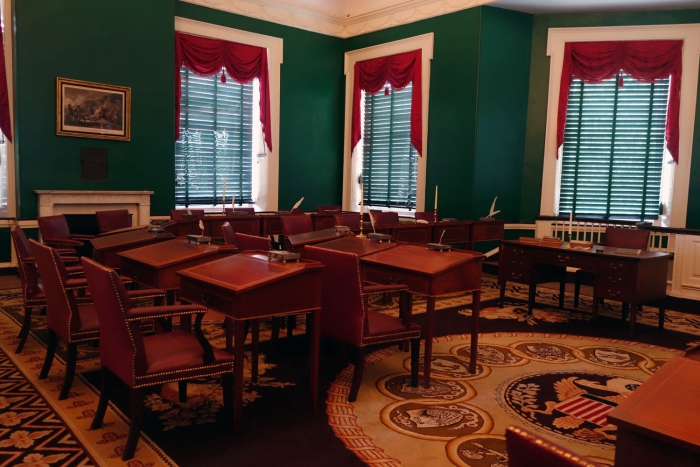 At around 4.45pm we started to queue for Independence Hall - there were already quite a few people in front of us and the line did grow quickly behind us. All was well however as they let a lot of people in with each group and they continue to do this every 15 minutes until 7pm so I reckon you would have a good chance of getting in even if you don't queue from 5pm! 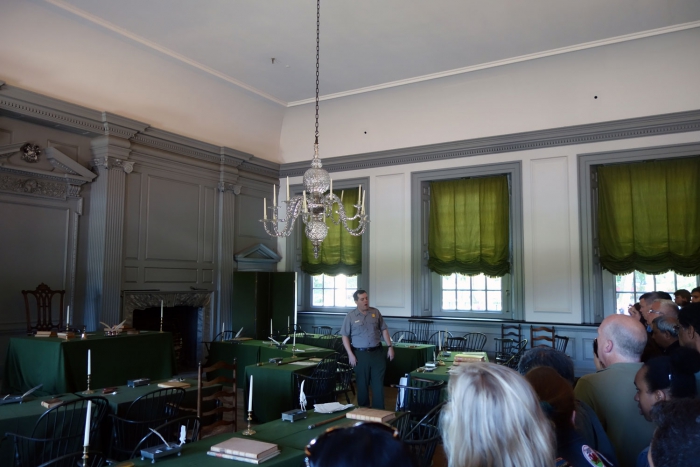 One of the other bits I loved about the feeling of walking around Independence square was stumbling upon the fully costumed, in character tours that were happening, from an old woman telling tales in the park to a boy scout troop being marched around by a general. It really is a fun, and very interesting historical place to visit. 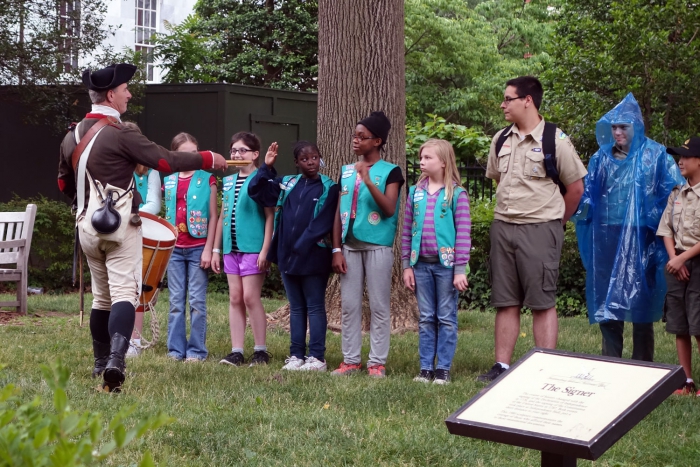 Another must see when in Philadelphia is the liberty bell which is beside Independence Hall. The queues for this are always long, but don't require a ticket and the line seems to move fairly quickly. You actually start queuing in the remnants of George Washington's house; they have excavated the foundations and placed walls and fireplaces where they would have been in the house - it's a pretty cool way to keep the crowds entertained whilst they wait. 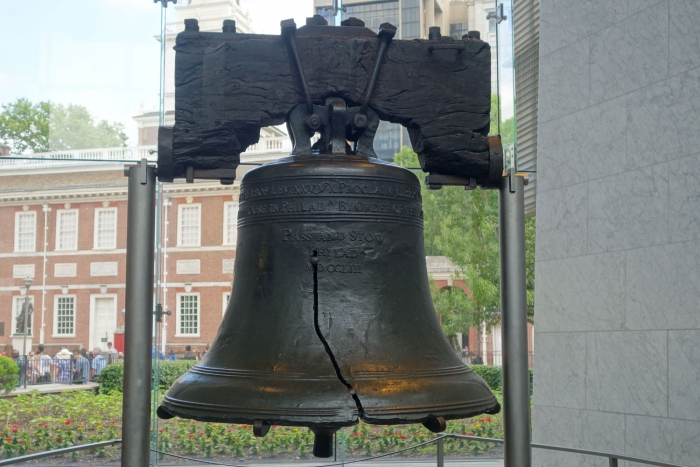 The bell itself is indoors and you walk through an exhibition about its history on the way to seeing it. It's roped off but you can get a lot closer than I imagined to be able to get!

After finishing with Independence Square we grabbed a pretzel (apparently a Philadelphia thing) and walked towards Elfreth's Alley - the oldest residential street in the U.S. 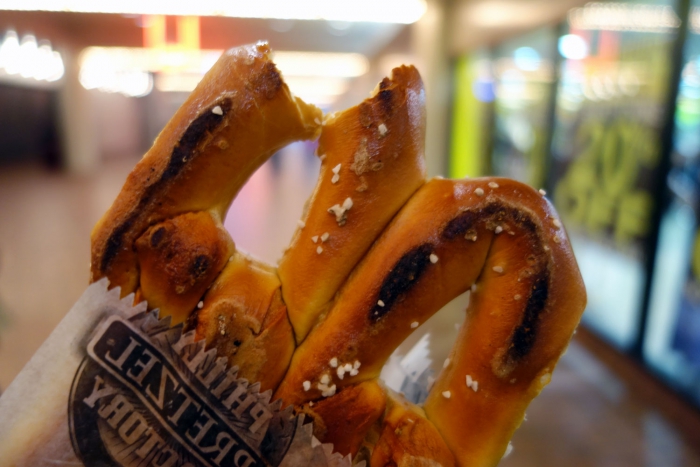 The alley is really cute, reminds me of an old British street with its cobblestones and terraced housing but it's free to walk down and grab another little piece of American history. 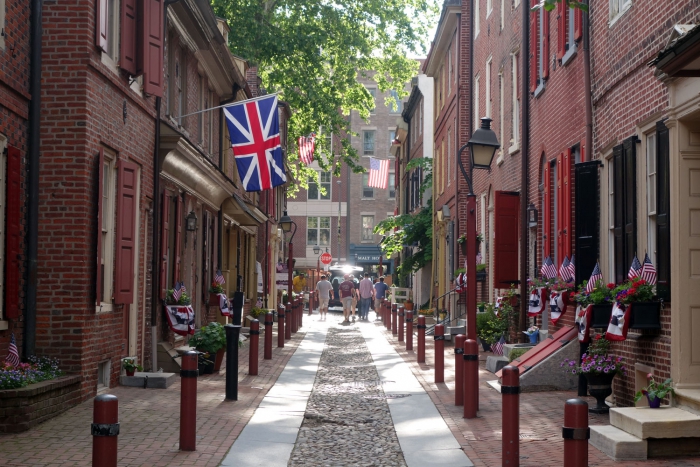 We started to walk back to our accommodation through the Society Hill area - this is a residential area that is really well maintained and still keeps its historical appearance so is quite pleasant to walk through. 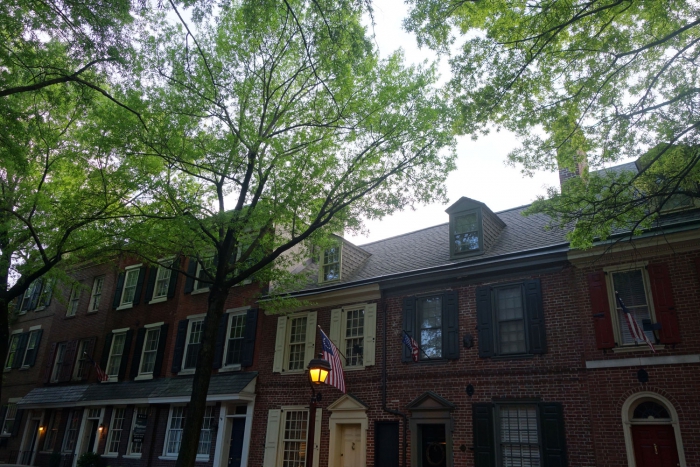 When we hit South Street (the apparently hip and 'with the times' area of the city) we decided we should get food! We figured we couldn't come to Philadelphia without having a Philly cheese steak and so after a bit of googling, decided on Jim's Steaks. 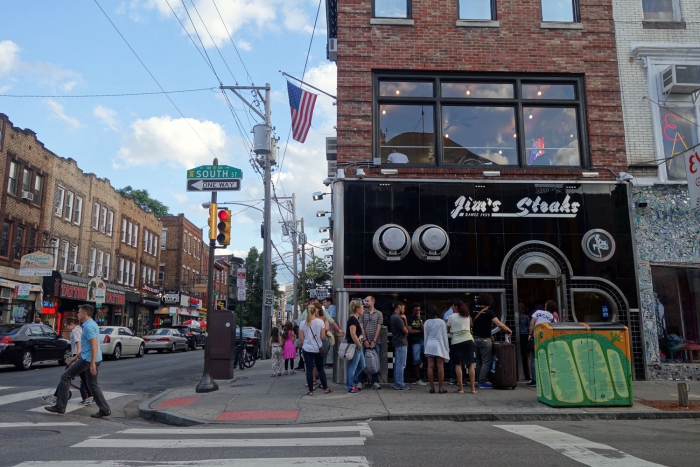 The line was long (which did reinforce its popularity) but they get you through quite quickly. You need to tell them what cheese you want (I had American and Alistair had Cheez Whiz with the third option being Provolone) and if you want onions. Then you pay and can either sit upstairs or takeaway. We opted for upstairs and were lucky to find a seat! 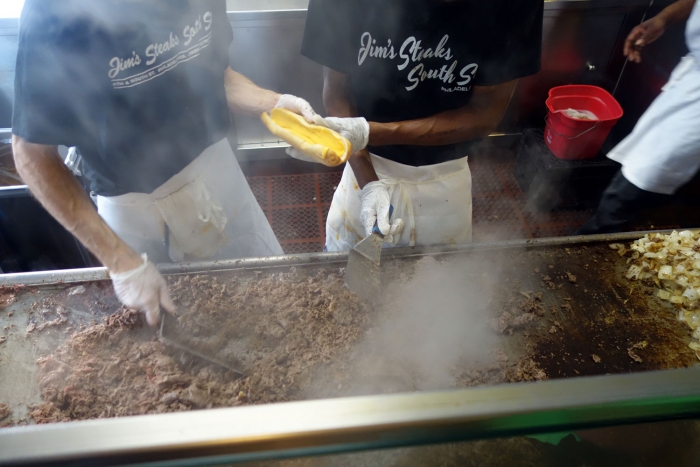 The cheese steak I have to say was amazing. I can only compare with others I have had at home but alongside those there is no competition. The meat is tender and tastes almost like roast beef and gravy, and the bread and cheese complement it well - I would highly recommend this place if you are looking around for a good cheese steak. 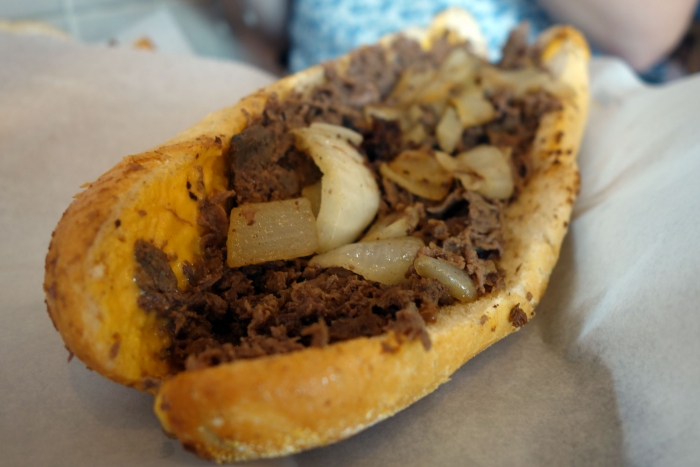 The next morning we headed for our bus to New York and so our whistle-stop tour of Philadelphia was over. We could definitely have spent another day or two there, the city is so steeped in history and art - I honestly didn't realise! But if you are pushed for time you can certainly see all the main tourist sights in a day like us and not be super rushed off your feet.