Written by Lisa. Published on Monday, 22nd June 2015
Driving down the Florida keys, making a few stop offs on the way.

Our first stop was a bit of a random one but appeared in all the 'must do' lists for the keys. This is a marina where hundreds of tarpon swim around waiting to be fed. You pay $1 to access the jetty and can pay $3 for a run of fish to feed to tarpon. They are absolutely huge and do jump up out of the water to grab fish out of people's hands. 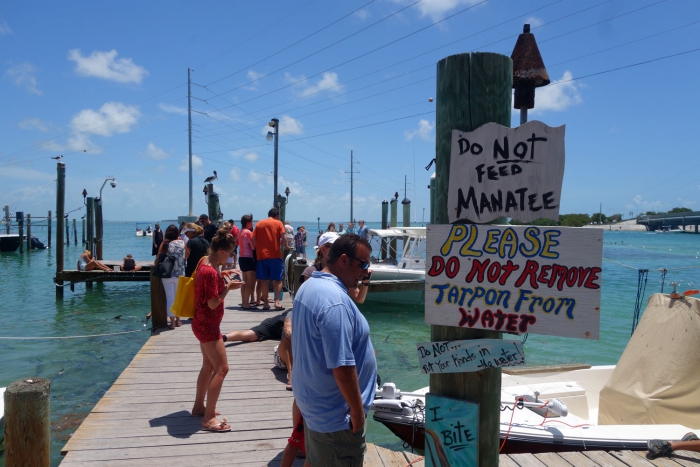 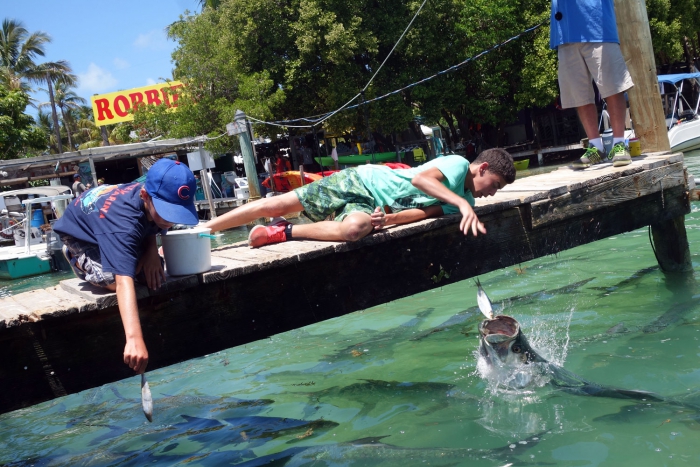 There were quite a lot of people there and it was the middle of a weekday so it does seem to be a popular place. It was just a pull in off the road that we would be driving on anyway so was easy enough to do and a fun way to spend 20 or 15 minutes.

From my reading it seemed to be that Bahia Honda state park had the prettiest beaches in the keys. We decided to pay the $9 entrance fee and spend the afternoon there as it was only 15 minutes or so away from our hotel on Marathon (we chose to stay in the middle of the keys for accessibility).

The tide was coming in when we arrived and so the beaches were slowly obliterated until there was barely any sand left, the water however was gorgeous. The first beach we went to had a sandbar a couple of metres off shore, the water was crystal clear there and a really nice temperature to lounge around in. 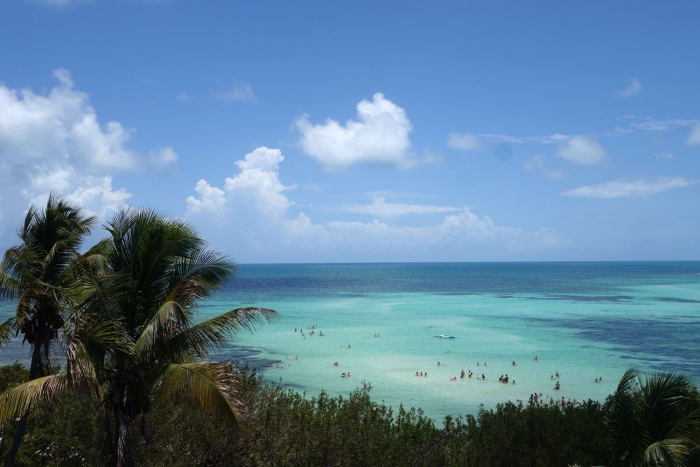 We then walked the short distance to the more family oriented beach on the other side which has restrooms and things nearer by. The water wasn't as nice here, I definitely preferred the sandbar beach. We dried off and before going to see the final beach we walked up the short distance to old bridge to get a bit of a higher view of the two beaches on either side that we had already visited. 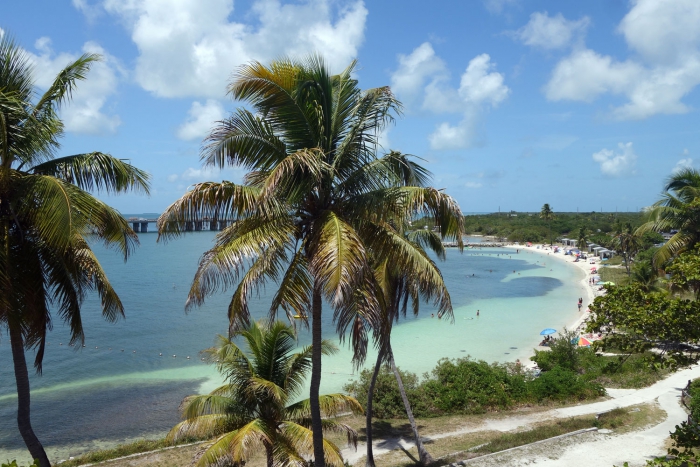 By the time we reached sandspur beach (which was the opposite end of the park so we drove to it) the tide was right in and there was barely any beach and the sea was a little choppy and less clear than the other two. This was a little disappointing as we had heard this was the nicest beach of them all. We still sat around in the sun for an hour or so and then packed up to check into our hotel. 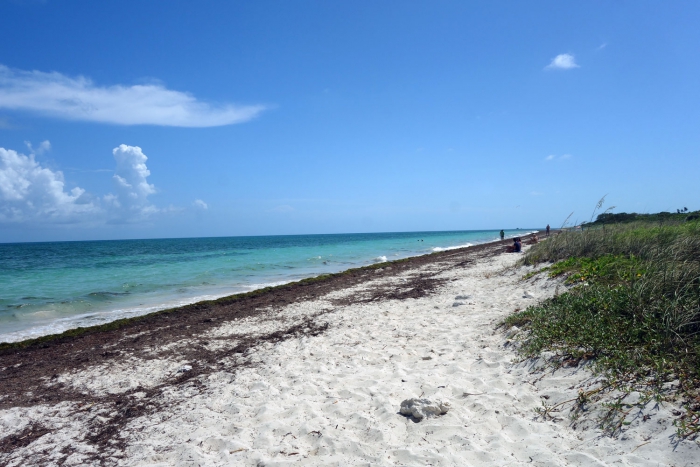 It was a nice way to spend an afternoon but perhaps check the tide timetables and try to go when the tide is lower as I'm sure it will be even better then.

We spent the next day visiting Key West, right at the end of the keys. We arrived shortly after lunch and decided to start out with some Key Lime Pie, an unmissable opportunity whilst being in the keys. We got a normal piece and a chocolate dipped frozen piece from Kermit's and I was pleasantly surprised. At home I would never pick key lime pie for dessert but this was refreshing and tangy as opposed to bitter or sour - we both really liked it! 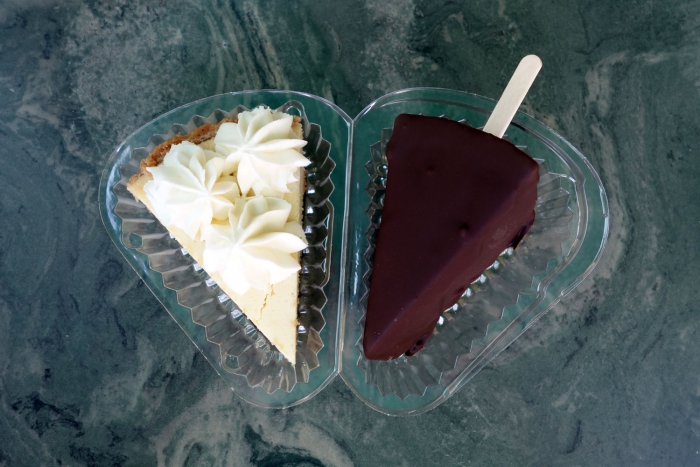 Our next stop was to see the southernmost marker which apparently denotes the southernmost point of the USA and states that the distance from that point to Cuba is only 90 miles. It seems however that this is not actually the true southernmost point, that title belongs to some land inside the navy base just down the road. There is actually a queue along the sidewalk to take your picture at the marker, even in the middle of a weekday! We happily snapped a picture with the crowds around it and continued on, not wanting to wait in the baking heat. 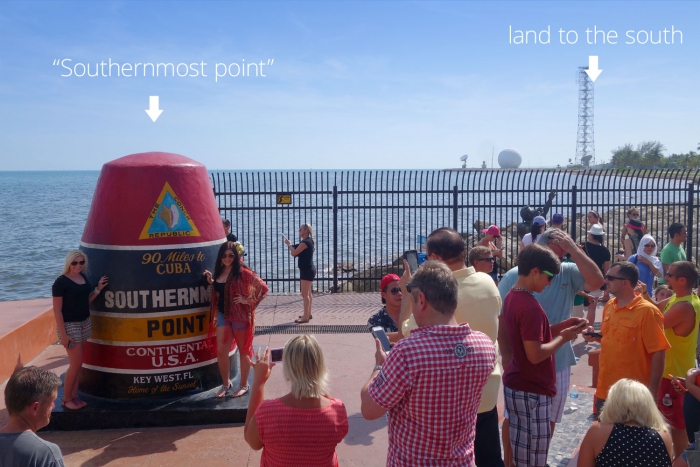 Our final activity of the day was to wander up Duval Street (it seemed to be the main hub of tourist activity, souvenir shops and bars all the way along it) before reaching Mallory Square which is where people sit and watch the sunset, with stalls and street performers set up a couple of hours beforehand. 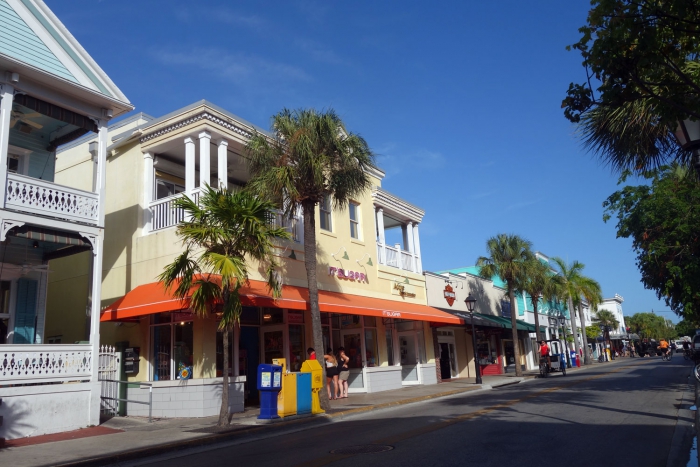 Given it is nearly the end of June, sunset was pretty late so we watched the performers and stalls set up, saw the first 'show' of a sword swallower and then headed home. If we were staying in Key West then this would definitely be an interesting place to come to watch the sunset! 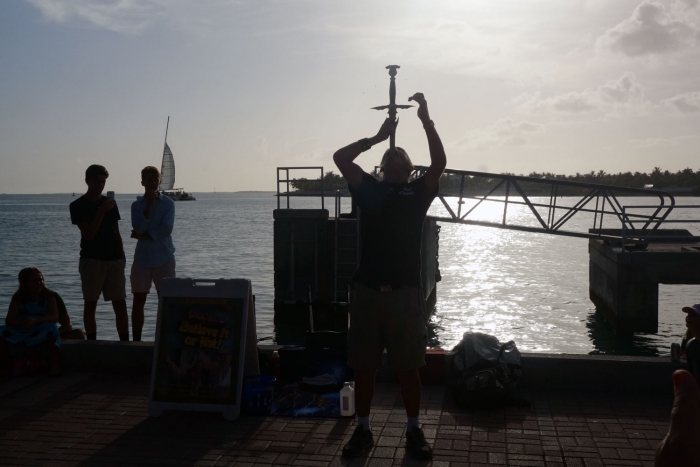 It was fun to see some of the different keys but I think the drive itself all the way down to Key West was most of the novelty. It's a very unusual road, a lot of it having water on both sides and on a nice day, it's one of the prettier drives we have done on this trip! 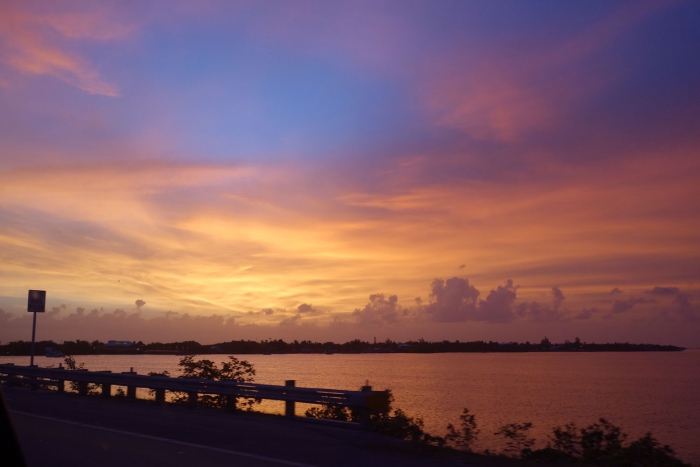 The other activity that we did consider was snorkelling at John Pennekamp national park, supposedly the nicest snorkelling on the keys and where you can see the 'Christ if the Deep' statue. In the end we came to the conclusion that nothing was going to be able to beat our Great Barrier Reef experience as we had near perfect conditions the day we snorkelled there. Alerts about flesh eating bacteria in the water and some choppy seas forecast also didn't help. We decided to skip the snorkelling and perhaps wait a couple of years before doing it again to give the the memory of Australia time to fade a little.